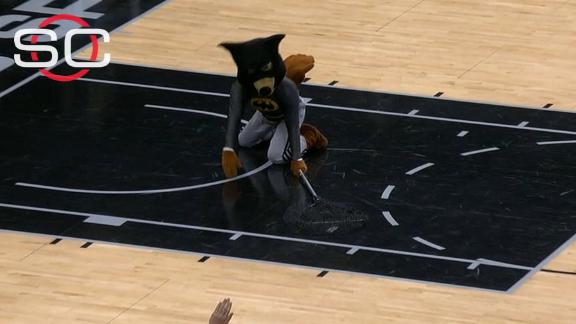 Team mascot The Coyote, wearing a Batman costume, snared the critter that flew into the arena during warm-ups before San Antonio faced the Minnesota Timberwolveson Monday.

The most recent time a bat caused a commotion in San Antonio was Nov. 1, 2009, when a bat in the arena led to a brief delay in a game against the Sacramento Kings. Ginobili swatted that bat out of the air before picking it up and carrying it off the court.

The following day, Ginobili was forced to get a rabies shot as a precaution.

This time, the bat flew over the court and lower-level seats during warm-ups. The few players who were on the court were told to return to the locker rooms.

The Coyote rushed to his changing room and donned his superhero suit -- a persona he has assumed on occasion since Ginobili's catch. Using a net, The Coyote caught the bat just below a foul line, then delivered it to security, who took it from the net with a towel.

A Spurs official said bats occasionally fly into the AT&T Center, but it rarely happens during games.