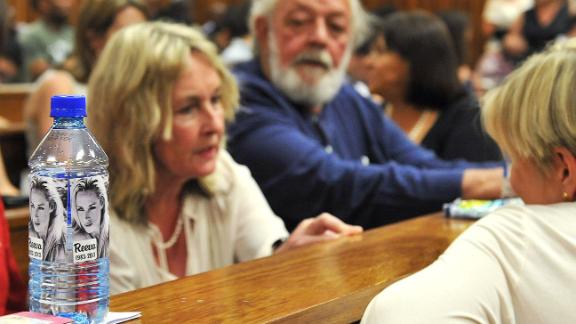 PRETORIA, South Africa -- Oscar Pistorius must "pay for what he's done" and his apology to the family of the girlfriend he killed was not sincere, a cousin of Reeva Steenkamp said Thursday as testimonies wrapped up.

Kim Martin spoke on the fourth day of the sentencing portion of the double-amputee Olympian's trial. Following the testimony and final arguments, Judge Thokozile Masipa will rule on the punishment for Pistorius after convicting him of culpable homicide for shooting Steenkamp through a toilet door in his home.

"My lady, I really believe the accused, Mr. Pistorius, needs to pay for what he's done," Martin testified before the red-robed judge.

"My family are not seeking revenge," Martin said. "We just feel to take somebody's life, to shoot somebody behind the door who is unarmed, who is harmless, needs sufficient punishment."

Just after the court adjourned for lunch Thursday, Pistorius' sister Aimee became tearful and distraught, telling her family that a man who was behind her in the gallery had mouthed an obscenity at her. Pistorius' brother, Carl, said he would inform police about the courtroom incident.

Two men who said they were in court to support Steenkamp's family denied any involvement in the alleged incident and accused Aimee Pistorius and her family of lying.

"They're making up a fabricated story, same as Oscar's," said Mikey Schultz, a former boxer and the self-confessed killer of a businessman in 2005 who escaped prosecution in an immunity deal with the state. Schultz has been seen sitting in court this week with men who have had confrontations with Pistorius in the past.

The prosecution and defense said they would deliver final arguments on Friday, clearing the way for the judge to deliver the sentence at a date yet to be announced.

Pistorius was acquitted of murder for the Feb. 14, 2013 killing and found guilty of the lesser crime of negligent killing. Masipa has wide latitude when deciding on a sentence for culpable homicide, and could order a suspended sentence and a fine, house arrest, or send him to prison for up to 15 years.

Defense lawyers have argued for a sentence of three years of house arrest with community service. In the first part of the sentencing hearing, they called a psychologist and social workers, who said that Pistorius should not go to prison because of his ongoing emotional suffering. They also said his disability as a double amputee who needs prosthetic legs would leave him vulnerable in jail.

Martin, the cousin, said a prison sentence would be appropriate for Pistorius and that she understood the rehabilitation program in jail to be humane and dignified, contrary to allegations by one of the social workers who testified for the defense. In her sometimes emotional testimony, Martin said many people had suffered because of Pistorius, including his own family, and that a sentence that excludes jail time would encourage the athlete to "feel within himself that what he's done is all right."

Zach Modise, the acting national commissioner for correctional services, testified after Martin, saying that the South African prison system compared favorably with prisons he had visited in Britain and the United States. He acknowledged problems such as overcrowding and gang activity, but said officials had made progress in combatting those problems and that some prison facilities can cater to disabled criminals, including Pistorius.

"We will be able to accomodate him," Modise said. The athlete would be housed in the hospital section of a Pretoria prison, he said.

However, defense lawyer Barry Roux referred to reports of an increase in alleged torture in South Africa's prison system. He also said an imprisoned gang leader alleged that Pistorius would be under threat if he is incarcerated; Modise said he was not aware of any threat.

Chief prosecutor Gerrie Nel has described defense calls for a house arrest sentence as "shockingly inappropriate" and wants Pistorius to be sent to prison.

Tension flared briefly during the court session when Roux suggested Nel was trying to place purported facts on the record rather than asking questions of a witness.

"I think Mr. Nel must just take the oath because he's giving evidence," Roux said, drawing laughter from the gallery.

Nel responded that it wasn't funny.

"I could make the same sarcastic remark but I decided not to," he said.

Judge Masipa later cautioned Roux, saying he could object but had not done so appropriately.

Thursday's proceedings started on a light note. Nel congratulated Masipa on her 67th birthday and people in the courtroom applauded.