KGO
By Wayne Freedman
OAKLAND, California -- Golden State Warriors star Stephen Curry is making changes to how Under Armour sells his shoes, and it's all because of a little girl's letter.

On Thursday, a 9-year-old girl dribbled a basketball on a wet street with no hoop in sight, surrounded by news crews and cameras. Riley Morrison of Napa, California, welcome to your first 15 minutes of fame.

"I just can't believe it got to this point," she said.

Riley Morrison gets her 15 minutes of fame at age 9. Not wearing #Curry5 but certainly showing her stuff. Only 5 crews want this story right now. Fame is fleeting...ugh, feeting? #abc7now pic.twitter.com/5lkAvCrO1Q

And it's all over a pair of basketball sneakers.

Riley is a point guard who went online searching for the girls' version of Under Armour Curry 5s, but the company only marketed them to boys. She took issue with that.

"It was disappointing that they were not on the girls' page," she said.

"Girls are continually overlooked," he said. "And as her father, I don't want her overlooked. I want her to have the same opportunities as guys."

So Riley penned a letter. She has now received a handwritten response from Curry, promising to make a change and also to send her a pair of those shoes.

Appreciate you helping us get better Riley! We got you. #MoreToCome pic.twitter.com/UBoTklvwhg

"I didn't think he would respond, because he's such a busy man," she said.

By morning, this wasn't just a shoe story anymore -- Riley had gone viral.

the #Curry5 shoe not just for ‘boys’ anymore. See website. Now for ‘kids’ after letter to Steph from 9-year old Riley Morrison in #Napa. Great pub for @UnderArmour . Riley talking to reporters after school. Making a difference at age 9... #abc7now pic.twitter.com/PGzAsTZh7O

"It means to me that girls are strong, and they can do anything they put their mind to," Riley said.

That means a lot more than just dribbling a basketball. 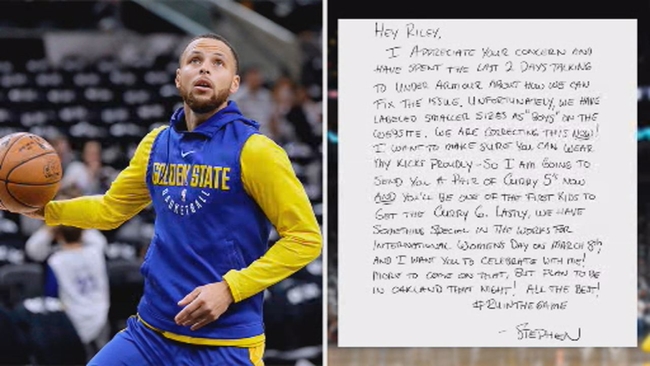 2 officers shot in stairwell of Brooklyn apartment; suspect in custody