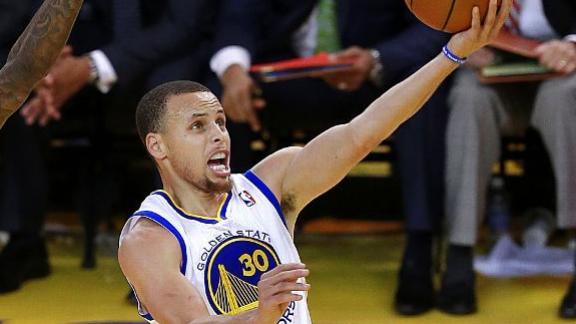 In his first extended public comments since Mark Jackson was fired, Curry said Thursday that he voiced his support for the coach but the team "made a decision otherwise." He also said the "semi-quick hire" of Steve Kerr was "kind of a shock" to most of his teammates.

"There's no sugarcoating it -- it was a weird, expedited situation that we didn't see coming," Curry said. "And guys are human. You have to be able to adjust to it and have some time to respond. That's kind of what happened. I think we'll be fine once we have a clear picture of what's going on next year."

Curry had been the strongest supporter of Jackson before the Warriors dismissed the coach May 6 after a 51-win season and back-to-back playoff appearances. Golden State agreed to a five-year, $25 million deal with Kerr on May 14 and introduced him at a news conference in Oakland on May 20.

Even with owner Joe Lacob and general manager Bob Myers going against Curry's request for Jackson to stay, the All-Star point guard insists he still believes in the franchise's commitment to winning.

"One thing I can say about this organization, they want to win," Curry said. "Each decision is geared toward winning. That's something that flies well with a lot of players -- that they're going to try to put us in the best position to win. Obviously, I had a certain opinion of Coach Jackson that they made a decision otherwise, and I heard the reasons, but I won't dwell on it.

"As long as we're focused on winning and taking advantage of the roster we have and the opportunity we have with this window to try to continue to get better, I'm just looking forward to next year and getting back to making that happen," Curry said. "I haven't lost faith in that at all. As much as I supported Coach Jackson and loved everything about playing for him, I think they're about winning."

Curry said he has spoken to Kerr three or four times by phone already. He said the conversations have been more informal than any basketball strategy, and he's looking forward to in-person meetings after Kerr finishes his job as a broadcast analyst for TNT in the Western Conference finals.

Curry said his support of Jackson stems from their bond off the court and his memories of the organization before the coach arrived: a lot of losses -- and two ankle surgeries -- under Don Nelson and Keith Smart.

"He was a sign of stability for me," Curry said. "I had three coaches in three years, and he embodies what I know is good around here with the Warriors -- winning and that kind of feel. It was a lot different in my first few years."

But Curry said he will adjust, learn Kerr's style and play just as hard for him as he did for Jackson. And he has no doubt his teammates will, too.

"At the end of the day, all of the guys in the locker room are trying to win," Curry said. "I know Steve Kerr has that mentality and that mission as well. Those two things will align, and we'll be fine."

Earlier, Curry was awarded the NBA's 2013-14 Kia Community Assist Seasonlong Award in front of a crowd on Golden State's practice floor that included many of the individuals and groups he impacted.

Curry's charity of choice, ThanksUSA, will receive $25,000 from the NBA and Kia Motors. ThanksUSA provides college, technical and vocational school scholarships for children and spouses of active-duty military personnel. Curry has served as a spokesman for the charity since 2010.

Curry's other charitable works included distributing 38,000 bed nets in Tanzania last summer with the "Nothing But Nets" campaign. He also helped raise money for the fight against malaria in Africa by donating three bed nets for every 3-pointer he made.

Curry called the award a "huge honor" and a team effort. He thanked his family, agents, members of the Warriors, the NBA and several organizations for partnering with him.