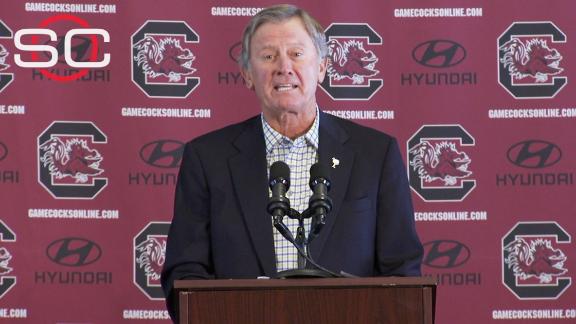 "First of all, I'm resigning and not retiring," Spurrier said Tuesday. "I doubt if I'll ever be a head coach again ... but don't say I've retired completely. Who knows what will come in the future?

"My answer has always been the same: If it starts going south, starts going bad, then I need to get out. ... It's time for me to get out of the way and give somebody else a go at it."

Spurrier sensed the end of his ultra-successful career might be near as the Gamecocks, who had lost two of their first three games, trailed strugglingUCF14-8 at halftime Sept. 26.

Although the Gamecocks came back to defeat UCF 31-14, they then lost to Missouri and LSU in consecutive weeks to fall to 0-4 in SEC play. After a loss to LSU on Saturday, Spurrier telephoned South Carolina athletic director Ray Tanner on Sunday and told him he was contemplating resignation.

Tanner and USC president Harris Pastides tried to persuade Spurrier to coach through the end of the regular season, but his mind was made up. This wasn't how Spurrier wanted to be remembered.

"Everybody likes to go out a winner," Spurrier told ESPN.com's Chris Low. "I thought I would, but it didn't work out. Sometimes, I guess we all push the envelope a little too far. In hindsight, I probably should have walked away after the bowl game. But we thought we had a pretty good team ready to go with some junior college kids coming in and a new defensive coordinator [Jon Hoke], but it just didn't work out."

The 70-year-old Spurrier -- known as much for his colorful quips about opponents and his confidence as he was for his offensive acumen -- told his players Monday night that he was stepping down, effective immediately.

South Carolina co-offensive coordinator and offensive line coach Shawn Elliott will be the interim coach for the remainder of the season. The Gamecocks (2-4, 0-4 SEC) are seventh in the SEC East heading into Saturday's home game against Vanderbilt.

"Our players need to hear a new message," Spurrier told Low. "Sometimes you change quarterbacks. Sometimes you need to change the head coach. We'll see if it helps out. I hope it does because this school deserves a winner."

When Elliott was asked about the pressure of replacing his former boss, Spurrier quipped from his seat, "We're 2-4, buddy."

Tanner said he was forming an advisory council and would use an outside search firm to assist him in finding a new coach. Among the potential candidates to replace Spurrier are Alabama defensive coordinator Kirby Smart, Memphis coach Justin Fuente and Houston coach Tom Herman.

Spurrier resigns with an 86-49 record at South Carolina and a 228-89-2 mark in 25 seasons as a head coach. He coached Florida, his alma mater, from 1990 to 2001 and led the Gators to the 1996 national championship and six SEC championships using his innovative offense.

What Spurrier accomplished at South Carolina was nearly as impressive, as he led the Gamecocks to three consecutive 11-win seasons, from 2011 to 2013, behind quarterback Connor Shaw, defensive end Jadeveon Clowney, receiver Alshon Jeffery and running back Marcus Lattimore.

Spurrier became South Carolina's winningest coach, with 65 victories to surpass Rex Enright, in the 2012 season finale. Spurrier is also Florida's winningest coach (122 victories), and he and Paul "Bear" Bryant are the only coaches to record the most wins at two SEC schools. Only Bryant, with 159, has more SEC wins than Spurrier's 135.

"The minute he became our coach, he gave us credibility maybe we didn't have," Tanner said. "He changed the culture, brought a swagger and a champion's mentality. The brand is better than it's ever been."

What's next for Spurrier? Even he doesn't seem to know.

"I don't know if coaching is completely over or not. It is fun being on a team," Spurrier said. "I might be a consultant for somebody. I don't know. I doubt if I'll be a head coach. Who knows? But I doubt it."

Spurrier told Low he doubts he'll attend many South Carolina games the rest of the season, as he believes it is best for him to stay away for the time being.

Spurrier was close to stepping down at the end of last season, when the Gamecocks dipped to 7-6 after three straight 11-win seasons and three straight top-10 finishes, but he elected to return. The Gamecocks have lost eight of their past nine SEC games dating to the previous season.

Spurrier said this summer that he planned to coach two or three more years, then he extended that to four or five years when several recruits who had committed to South Carolina backed away before signing day in February.

Then in July, Spurrier held a defiant news conference in which he told Gamecocks fans not to listen to "enemies" questioning his commitment or implying he could no longer effectively coach at his age.

"We haven't lost it," Spurrier said before this season, his 11th at South Carolina and 23rd in the SEC. "We've got a dang good team."

Asked what happened between then and now, Spurrier told Low, "2-4 is probably what did it," in reference to the Gamecocks' current record. "Times change. I meant what I said back then. I thought we had a better team. I thought I could help us be a better team. I was wrong. I guess we're all guilty in the preseason of thinking we're going to be better than we are. Nobody ever says, 'We're going to struggle to have a winning record.' I might have built us up too much, but I believed it."

In addition to his time at South Carolina and Florida, Spurrier had brief stints atDukeand with the NFL'sWashington Redskins.

He won the 1966 Heisman Trophy as Florida's quarterback and played for San Francisco and Tampa Bay in the NFL.

"I'll find something," Spurrier said of his future. "I'll probably do what I do in the offseason, have an offseason year-round. Really, I guess I'm fortunate that I lasted this long. Not many of us are still coaching into our 70s."

ESPN.com's Chris Low and The Associated Press contributed to this report. 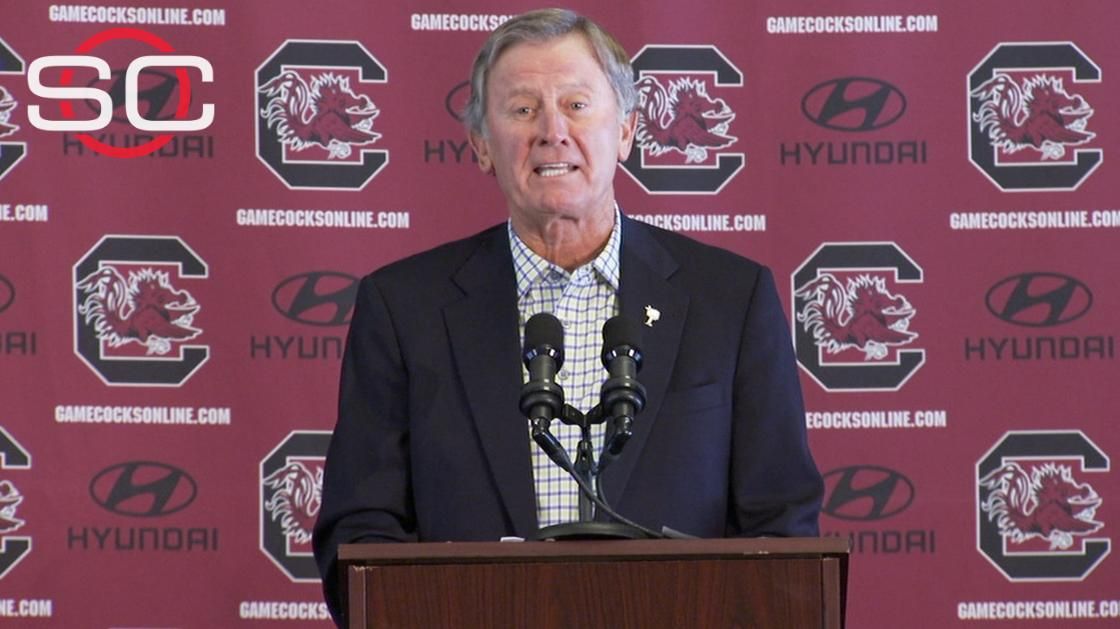 Spurrier: 'I'm resigning, I'm not retiring'
Steve Spurrier explains his decision to step down as head coach of the South Carolina Gamecocks. 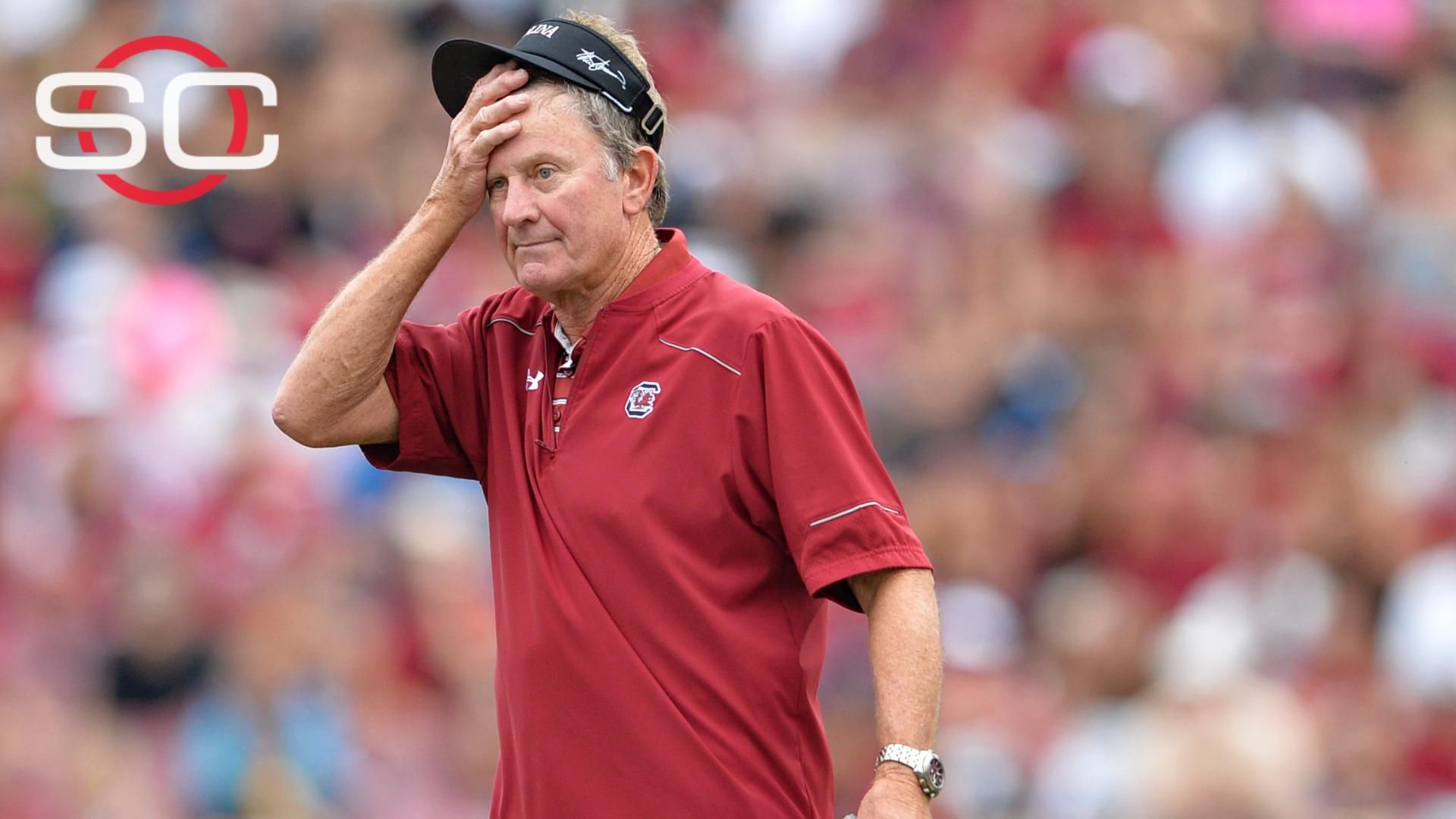 Why is Spurrier retiring?
ESPN's Joe Schad provides insight as to why Steve Spurrier is stepping down as the South Carolina head coach in the middle of the season.