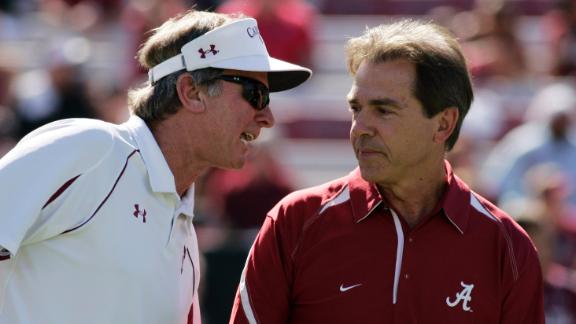 HOOVER, Ala. -- Steve Spurrier has taken a few jabs at Alabama and its head coach this offseason, but when he came to SEC media days Tuesday morning he was full of compliments, calling Nick Saban a recruiter for the ages.

"They've done extremely well, there's no question about that," South Carolina's coach said of Alabama. "I think they've had five No. 1 recruiting classes out of the last six years, which has got to make [Saban] the greatest recruiter in the history of college football."

Spurrier, who enters his 10th season leading the Gamecocks, called Alabama "the favorites" to win the SEC, in large part because of its recruiting efforts. The Crimson Tide wrapped up their third straight No. 1 class in February and have never finished outside of the top three in ESPN's rankings since Saban's first year in Tuscaloosa in 2007. With 16 current ESPN 300 commitments, they are well on their way to another top class.

"Arguably they've got the greatest collection of football players ever assembled on a college team, if the recruiting services are correct," Spurrier said.

In June, Spurrier raised eyebrows by questioning whether Alabama had "maxed out" its potential with only two SEC titles in eight years.

But at media days, the story was different.

"They do it the right way," Spurrier said of Alabama. "He runs a good program. It's just amazing how they've been able to stack and keep loading up on players each year."

He acknowledged that a few other teams in the SEC have also recruited well, singling out LSU and Texas A&M.

And while on the subject of the Aggies, Spurrier lamented the end of their rivalry with Texas.

"Florida plays Florida State. We play Clemson. Georgia plays Georgia Tech. We're in different conferences, but they are in-state rivals. The fans want to see that, to me. They want to see you beat the guys next door, the neighbors. I think it is sad. I know they're not going to play each other. That's just my opinion, anyway."

Spurrier Praises Saban's Recruiting
South Carolina coach breaks down why he praised Alabama coach Nick Saban's recruiting skills and how his own team could perform this season.