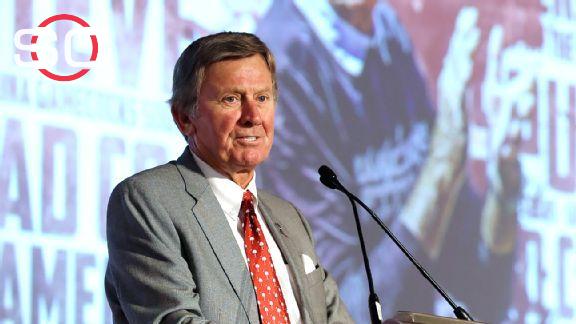 South Carolina's Steve Spurrier, fed up with the age questions and critics suggesting that his best coaching days are behind him, went on the offensive Wednesday.

Spurrier, who turned 70 in April, called an impromptu news conference with local reporters to reaffirm to South Carolina fans that he is as committed as ever and not to listen to the Gamecocks' "enemies." South Carolina dipped to 7-6 last season after being picked to finish first in the SEC's Eastern Division; the Gamecocks previously had three straight 11-win seasons and three straight top-10 finishes nationally.

"We were 11-2 and ranked fourth in the country this time a year ago, and nobody said a damn word about my age," Spurrier told ESPN.com during a separate conversation Wednesday following his fiery news conference. "Now, a year later, I'm suddenly too old, and we're on our way down.

"I just want our fans to know that we're going to have a good team and recognize that it's our enemies saying these things about Spurrier being washed up and we're not going to be heard from again. Gamecocks out there need to know that I'm going to be here five or six more years, and away we go."

Spurrier was at the ESPN studios for a series of interviews and show appearances Tuesday, and he said he wasn't happy about the way he answered some of the questions about how much longer he wants to coach. He also is miffed that his age has become an issue just one year after he led the Gamecocks to their most successful run in school history.

"I didn't come out strong enough for our fans," Spurrier said Wednesday. "It was the same way when I got to Florida. Some of the writers in Georgia said I'd never last and flame out, and then we started kicking Georgia's butt every year. They quit writing that crap. I still remember Vince Dooley saying when they fired Galen Hall that he couldn't believe it, and he was as good a coach as they could possibly have at Florida. I said then, 'I hope a Georgia coach never says that about me.'"

Spurrier acknowledged to ESPN.com that he was "in the dumps" over the way the Gamecocks lost so many close games in the fourth quarter last season. He said the thought of stepping away entered his mind.

"When you coach as long as I have, you're always going to have those kind of thoughts when things don't go the way you want them to, but I never said I was leaving," Spurrier said. "It was just something to write about.

Spurrier, who brought in Jon Hoke to run the Gamecocks' defense after they struggled on that side of the ball last season, said he's not going to let one down season derail the momentum the program had built since going to the SEC championship game in 2010. Before he arrived in 2005, South Carolina had only one season of double-digit wins in its history.

"Nobody's happy about what happened last year, but we did win a bowl game for the fourth straight year," he said. "You know, Coach K [Mike Krzyzewski] lost to Mercer two years ago in the NCAA tournament and came back and won a national championship last year."