Steve Spurrier says he'll be back 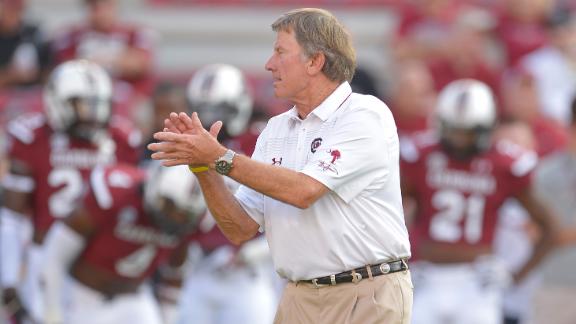 Steve Spurrier, who has elevatedSouth Carolina'sprogram to national prominence in the 10 years he's been coach, isn't ready to walk away after seeing the Gamecocks dip to 6-6 this season.

Spurrier had extensive talks Sunday with South Carolina athletic director Ray Tanner and said he's committed to pointing the program in a better direction before calling it quits on his Hall of Fame career.

"Everything's on go, and I'm full speed ahead," Spurrier told ESPN.com on Monday. "When you've done it as long as I have and have some of the disappointing losses we did this year, a lot of stuff runs through your mind. But in the long run, this is the best thing for me to do. They seem to want me here.

"Now, if they didn't want me here, it would be time to move on. But we've got a good recruiting class coming in, and it's still a really good situation."

After a third straight 11-2 season in 2013, South Carolina was ranked ninth in the 2014 preseason Associated Press Top 25 and expected to win the SEC East, but the Gamecocks finished 3-5 in the division. Despite that, they are bowl eligible at 6-6 and await their game assignment.

"We didn't play very well at times this year, but the program is still in good shape," Spurrier said. "We can get this thing turned around, but we've got some coaching to do and a team that needs some coaching."

The three straight 11-win seasons marked the first time in school history that had been accomplished, before seeing fourth-quarter collapses doom the Gamecocks this season. They lost three games in which they were unable to hold two-touchdown leads in the final 15 minutes.

South Carolina ended the regular season last Saturday with a 35-17 loss to No. 23 Clemson. That's after winning an unprecedented five straight over their rivals.

Defensive struggles were at the root of the Gamecocks' problems this season. They gave up 34 or more points in six of their eight SEC games and rank 13th in the league in total defense and 12th in scoring defense.

Spurrier declined to elaborate on what changes he might make to his staff.

"I don't want to get into all that," he said. "Sometimes coaches come and go. We all know that. They move around, but we're all intact right now. We'll see what happens down the road. The thing we're doing right now is trying to recruit some more good players, making sure all of our guys are going to class and getting ready for the bowl game. We'll go from there."

Spurrier, who turns 70 in April, has never been specific about how much longer he wants to coach. He's always said that he plans on coaching four or five more years any time the topic is broached. But on Monday, he said it would be closer to "two or three more years."

While conceding that this season was particularly frustrating with the Gamecocks not being able to finish so many games, he said it never got to the point where he seriously saw himself quitting.

"What else is there to do?" quipped Spurrier, who is the all-time winningest coach at both Florida and South Carolina. "This is more fun than doing nothing, and I'm not very good at doing nothing."