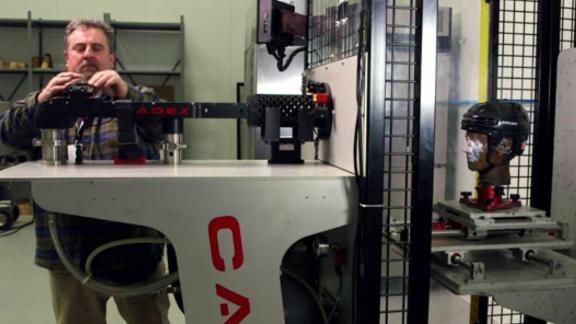 ESPN
By Steve Fainaru
More than a quarter of all helmets worn by hockey players, from the NHL to youth leagues, are unsafe, according to an independent study provided to "Outside the Lines" that ranked hockey helmets based on their ability to reduce concussion risk.

Out of 32 helmets in the marketplace that were tested by researchers at Virginia Polytechnic Institute and State University, nine failed to earn a single star on a five-star scale and were classified as "not recommended." Just one helmet, made by Warrior Sports, received three stars. The rest received one or two stars.

"In general, they're low performers," said Stefan Duma, the head of Virginia Tech's department of biomedical engineering and mechanics, which spent three years and $500,000 developing the ratings. The study did not receive funding from the helmet industry.

Hockey players wearing the "not recommended" helmets risk incurring at least six concussions per season, and in some cases more than eight, according to Virginia Tech.

"We don't think anybody should be playing in these helmets," Duma said of the non-recommended models.

The school will release the ratings publicly on Monday; a paper detailing the system's methodology will be published simultaneously in Annals of Biomedical Engineering,a scientific journal.

Virginia Tech introduced a similar ratings system for football helmets in 2011. The rankings drew some criticism but ultimately led companies to overhaul their product lines. Virginia Tech defines five stars as the "best available" helmet; one star is "marginal."

The two most expensive hockey helmets on the market, made by Bauer and CCM, received one-star ratings.

Nearly 2.4 million Americans play hockey, which, according to the Centers for Disease Control, has a higher rate of concussions than any other sport. The Virginia Tech study raises questions about the methods by which hockey helmets are tested and adds fuel to the debate over whether helmets can do much to prevent concussions, an injury that is difficult to diagnose and dependent on myriad factors ranging from individual tolerance to neck strength.

All 32 helmets rated by Virginia Tech were previously certified as safe by the Hockey Equipment Certification Council, or HECC, a non-profit organization. Helmet manufacturers make up part of HECC's certification committee, along with consumer and general interest representatives. Both the NCAA and USA Hockey, the national governing body for ice hockey in the United States, require that players use HECC-certified helmets. The NHL requires that helmets meet the requirements of both HECC and the Canadian Standards Association.

To become certified, HECC requires that helmets withstand 300 G's; the CSA requirement is 275. Although those standards will prevent most skull fractures and other catastrophic injuries, research shows that most concussions occur when the head is exposed to far lower levels of force.

Asked if he was concerned about Virginia Tech's findings, Dr. Alan Ashare, HECC's president, replied: "I would say yes." But he said it remained unclear whether a helmet receiving a higher star rating actually could correspond to a lower concussion risk, adding that no helmet can "guarantee that you're not going to have concussions."

Virginia Tech is "suggesting that a helmet that's rated 3, 4, and 5 is going to allow less concussions," said Ashare, a Boston-area radiologist. "Once I see the data, I'll be really happy, and then we'll change it. Or somebody should change something."

Duma said Virginia Tech hopes to provide parents and other consumers with an easy-to-use tool that measures how well the helmets perform not only against skull fractures but also against concussions.

"We're just saying we want to move to the next level, which is reduced concussion risk," Duma said. "They're focused on skull fracture, serious brain injury. We want to push the envelope and look at how we can reduce concussion risk."

Four years ago, Virginia Tech's newly introduced STAR system shook up the football helmet industry. The school received legal threats from some companies, which claimed that the ratings were overly simplistic and unfair. One company whose helmet was not recommended went out of business. But football helmets quickly improved: Just one initially received five stars, yet out of 26 helmets tested in the most recent ratings, 12 received five stars and eight received four stars.

Last November, Bauer signed an agreement with Canadian regulators to cease making "certain performance claims" about the RE-AKT helmet's concussion-protection properties. The company agreed to donate $500,000 worth of hockey equipment to charity after an investigation found that Bauer's claims were unsubstantiated.

On Bauer's website, the company boasts that the RE-AKT 100 delivers "an enhanced level of protection." But Bauer also provides a disclaimer: "Experts state that concussions are mainly due to acceleration or deceleration of the brain, and helmets may not prevent concussions caused by these forces."

"I am very proud of this helmet, and I know the designers, developers and engineers that brought this to market are also very proud of it," said Kevin Davis, the president and CEO of Performance Sports Group, Bauer's parent company, in an interview. "And while we welcome an opportunity to collaborate with Virginia Tech and understand some of the research that they have done, we absolutely stand behind this helmet as being the best helmet in our line."

Asked to explain how Bauer's top helmet could receive a one-star rating, Davis said the company was "trying to understand ... how they are correlating the protection of the helmet with the likelihood of receiving a concussion, which is something that we have been very careful not to associate our products with."

Davis said Bauer does not make claims that its helmets reduce concussion risk because of the myriad factors that produce the injury. He said the company has poured significant resources into research and development and recently funded a comprehensive youth study with University of Pittsburgh Medical Center.

Other major helmet companies also received low ratings. Out of 12 helmets sold by Reebok and CCM, which are part of the same company, three received two stars, five received one star and four were not recommended. CCM's most expensive helmet, the Resistance, which sells for $229.99, received one star.

"We welcome any research to improve the safety of players," said Evangelos Spyrou, who oversees research and development and certification for Reebok and CCM. "But we are missing at this point information that is needed to replicate the test. We need to fully understand what it entails, and how it compares to existing standards."

Spyrou said Virginia Tech's testing protocols evolved over the past year. Reebok received the final specifications used to test the helmets only two weeks ago, making it impossible to replicate the study in time to confirm the ratings, he said. He said Reebok is working closely with the University of Ottawa to study concussions and has built that research into its helmet designs.

"Our commitment to safety is of paramount importance," Spyrou said.

Virginia Tech's STAR system originated as a Ph.D. dissertation for one of Duma's students, Steven Rowson, who is now an assistant professor and co-director of the school's helmet lab. Rowson's wife, Bethany, whom he met in graduate school, adapted the STAR system to hockey for her own dissertation.

To develop Hockey STAR, Virginia Tech used previous sensor studies showing that male and female hockey players -- from Bantam level through college -- absorb an average of 227 hits to the head during a season (the numbers vary widely by age and gender). The analysis also used data that showed how and where most of those hits occur on the ice. At Virginia Tech's lab, each helmet model was subjected to 48 impacts designed to replicate the direction and velocity of those hits.

Duma said researchers evaluated each helmet's ability to slow the acceleration of the head, and thus the brain. For the first time, the study factors in "rotational acceleration" -- the twisting of the head that occurs on impact -- believed to be a major cause of concussions. Current helmet standards consider only "linear acceleration" -- a hit in which the head doesn't rotate.

The goal, said Duma, is to reduce the amount of G-forces exerted on the brain.

"Let's say you're a helmeted player and you fall down and you hit your head on the ice," Duma said. "The helmet's between your head and the ice. If it's a really good helmet, that impact might only be 50 G's. If it's a poor-performing helmet, for that impact you might have 150 G's. That's the difference between an injury and a non-injury event."

During a concussion, "You're accelerating the brain," Duma said. "The higher you accelerate it, the more it stretches. We want to bring that acceleration down."

Under the Virginia Tech system, each star corresponds to a separate numerical value representing the average number of predicted concussions a player could expect during a season. A five-star helmet, for example, would reduce force so effectively that less than one predicted concussion would occur. A not-recommended helmet would allow more than six concussions at G-force levels that have been shown to produce the injury, according to Virginia Tech's calculations.

One helmet, CCM's V04, was classified as "not recommended" after testing showed that players who wore it could incur a predicted 9.3 concussions per season.

Duma said the study revealed that there is no connection between the price of helmets and the level of protection they provide against concussions.

"That was sort of surprising," he said. "Overall, there's absolutely no correlation to price and performance."

The ratings are likely to generate controversy, not only because of the results but also because of the larger question: Can helmets prevent concussions, an injury that researchers are still struggling to understand?

Regardless of the helmet, the brain sits in a shallow bath of cerebrospinal fluid and cannot be fully protected. "What you really want to do, you want to put a helmet on the brain, not the skull," said Ashare, the HECC president. "... So the question is, what other things can we do to reduce concussions?"

To make the game safer, youth hockey officials have focused on reducing helmet-to-helmet collisions; teaching players to skate and to check with their heads up; eliminating fighting; and even developing a warning track around the boards, said Ashare, who also leads USA Hockey's safety committee.

A helmet can obviously cushion the blow, but there is still considerable debate over everything from the accuracy of the sensors used to calibrate the hits to the type of head forms that should be used to test the helmets.

Duma said he agreed that "there will never be a perfect helmet that will prevent all concussions. It's about risk reduction. The reality is when you look at the bottom and the top helmets, you're talking about massive reductions in acceleration, over half. I think almost all biomechanical engineers would agree that that's a significant difference."

Producer Arty Berko of ESPN's Enterprise and Investigative Unit contributed to this report.

Head Safety In Hockey
A new study finds that more than a quarter of all hockey helmets worn by players, from the NHL to youth leagues, are not recommended based on their inability to reduce concussion risk.
Related topics:
sportsespnsteve fainaruncaa mens hockeyncaa womens hockeyoutside the lineshockeyvirginia techfootballnhlhelmetsice hockeybrainconcussions
Copyright © 2020 ESPN Internet Ventures. All rights reserved.
More Videos
From CNN Newsource affiliates
TOP STORIES