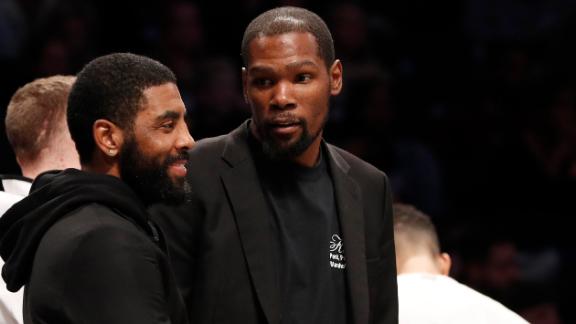 The Los Angeles Lakers will attempt to continue their solid run when they host the Brooklyn Nets on Tuesday.

The Lakers beat two of the NBA's top teams over the weekend, earning a 113-103 home triumph over the league-leading Milwaukee Bucks on Friday and a 112-103 road victory over the Los Angeles Clippers on Sunday.

Against the Clippers, Anthony Davis scored 30 points and grabbed eight rebounds, and LeBron James had 28 points, nine assists and seven rebounds. James also made some clutch baskets and free throws down the stretch as the Lakers captured their fourth straight win and 11th in 12 games. They also defeated the Clippers for the first time this season in three meetings.

"I think the best thing that came out of both games is we didn't have high-turnover games," said James, who had 37 points, eight rebounds and eight assists against Milwaukee. He had two of the Lakers' 12 miscues against the Clippers and four of the 16 against the Bucks. "When we don't turn the ball over and we're able to get good shots, then that helps us out tremendously, especially defensively."

The play of Avery Bradley, who scored a season-high 24 points by converting six 3-pointers, also contributed to the Western Conference-leading Lakers victory over the Clippers.

"We know what we're going to get from him defensively, but what he gave us offensively (Sunday) was gigantic," James said. "Every time they made a run or we needed a shot to make, not only in the first quarter but the third as well, when he got hot, just hitting 3s ... he was wonderful."

The Nets recorded a 110-107 victory at home over the Chicago Bulls on Sunday. The win occurred one day after head coach Kenny Atkinson and the team "mutually agreed" to part ways, according to team officials. Jacque Vaughn will serve as the Nets' interim coach for the rest of the season.

"It definitely was a little different, but I feel like (Vaughn) did a great job filling in for him," said Nets guard Caris LeVert, according to the New York Post. "It was pretty smooth. It was a very smooth transition, to be honest with you."

Spencer Dinwiddie had 24 points with six assists, and LeVert and Joe Harris added 23 apiece for Brooklyn, which has won three of four. Vaughn started center DeAndre Jordan, who collected 15 rebounds along with 11 points and three blocks, in place of Jarrett Allen, who also scored 11.

The Nets committed a season-high 28 turnovers to only seven for the Bulls. They also allowed Chicago to rally from a double-digit deficit in the fourth quarter, closing within three in the final minute before Dinwiddie clinched the win with free throws.

"Any time you can get a win, especially this time of the year, it's huge for us," said Harris, who connected on 8 of 12 shots and 3 of 7 3-pointers, according to the Post. "We have playoff implications and aspirations, and regardless of what's gone on, we're all professionals in this room. The aspirations stay the same."

Who should be the Nets next head coach?
Jay Williams makes the case for someone who can manage egos like a Tyronn Lue or Jason Kidd as the Nets next head coach.
Report a correction or typo
Related topics:
sportsespnnbabrooklyn netslos angeles lakers
Copyright © 2020 ESPN Internet Ventures. All rights reserved.
More Videos
From CNN Newsource affiliates
TOP STORIES