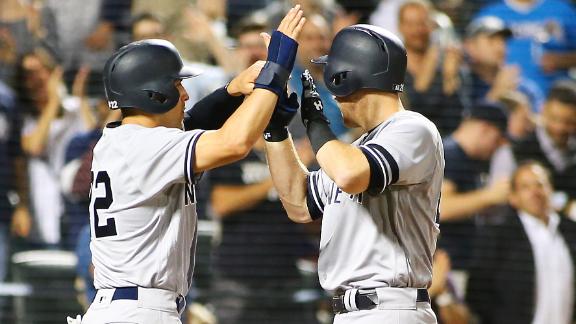 NEW YORK -- The center-field video scoreboard featured the same "Citi Field" in big, bold letters and the words "Let's Go Mets." But neither of the two logos flashing below it belonged to the usual home team.

The New York Yankees and Tampa Bay Rays played in Flushing after Hurricane Irma displaced the two teams from Tropicana Field in St. Petersburg, Florida. Other than the 2013 All-Star Game, it was the first time in the National League park that the DH was implemented in a game that meant anything. And it meant so much more Monday than just baseball.

Since the game was switched just three days ago, seats to the upper two decks weren't sold, and hence blocked off to the fans. The lower levels were filled as much as they would be if the game were in the Bronx. Even without any bleachers, there was a roll call for the Yankees' fielders and "Let's go Yankees" chants. Manager Joe Girardi even admitted it felt like a home game.

The stands were filled with Yankees hats and jerseys while the home team -- technically, at least -- was, unsurprisingly underrepresented. With hotel availability issues for other neutral sites, the Rays were forced to choose the Yankees' backyard as the location for the three-game series.

There were some Ray supporters, though. Well, 11 or so, by Tampa Bay fan Michelle Axelrod's pregame count. She and Daniel Pack, whose dad had season tickets for the Rays when he was a kid in Tampa, came out to support the home team.

"Unfortunately, it is very similar to Tropicana Field sometimes," Pack said. "There would be more Rays fans if it were Tropicana Field, but not necessarily more than the Yankees."

For perspective, the announced crowd on Monday night was 15,237 -- just a tick below the Rays' usual attendance of 15,309 at the Trop.

Girardi had compared the night to a spring training game before first pitch, but there was a somber feel that hung over the oddity of it all. There was a moment of silence for the tragic events of Sept. 11, 2001, and there was also the concern from players about the impact of Irma, as many either live in the South or have friends and family in the impacted areas.

The Rays didn't make a fuss about having to play in their opponent's hometown, and instead paid respect to their own.

When Yankees saw familiar faces, they whipped out their cellphones to show the damage near their homes and the potential harm Irma might inflict. Veteran Brett Gardner shared pictures of Charleston, South Carolina, under water. Charleston is just an hour from his childhood home of Holly Hills, where his parents still live. As a 6-year-old in 1989, Gardner remembers a tree falling on his house during Hurricane Hugo.

"I think everybody would rather be playing in Tampa right now, but that obviously wasn't possible regarding the situation," Gardner said.

Yankees rookie Clint Frazier received texts with updates on his parents, who live in Walton County, Georgia. They weren't expected to receive the biggest brunt of the storm, but they had felt enough to knock their power out and make them fear for their tree-lined house.

"They are worried a tree is going to fall," Frazier said before the game Monday.

Dellin Betances' cousin, Erison Betances, fled his apartment in Clearwater, Florida, to find safer ground in Georgia. The 27-year-old and his wife, Samantha, and their daughter, Melody, were safe, but they were still awaiting word on their apartment.

Veteran Todd Frazier's parents have a house in Port Salerno, which is near Port St. Lucie, Florida, where the Mets train. Frazier was thankful his parents were north in New Jersey, though he was unsure how their house fared.

"I'm not sure if they got hit," Frazier said.

When the game got in full swing, Frazier went deep, which excited the crowd.

The Yankees went home to sleep in their own beds, road winners in New York, on, as Girardi put it, a most strange day.

"It is weird," Betances said. "Obviously, coming into the stadium, you see all the workers who have Mets gear on. Then when you look outside and you see the Rays. It is kind of different."

Even walking through the stands, it felt a little different. Fans enjoyed the $25 ticket prices for the lower-level seats, a far cry from the three and sometimes four figures one has to dole out across town.

The team store was completely empty, filled with Mets memorabilia in a stadium nearly devoid of Mets fans.

Ultimately, there was a respect about what was bigger than the game.

They're baseball players, so they knew the games needed to go on to squeeze 162 games into 183 days in a billion-dollar business. They were thankful for friends and family who were safe, and for finding a place to borrow as their home for three strange September days.