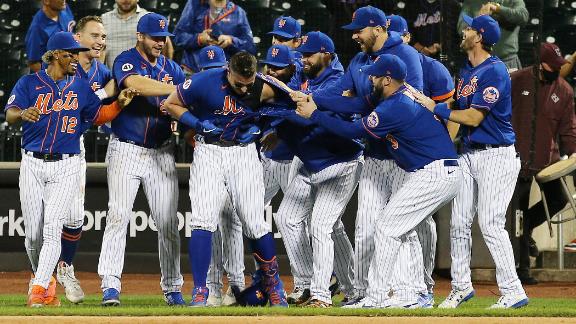 Even for just a few pitches.


Syndergaard looked sharp in his brief but long-awaited return from Tommy John surgery, and the New York Mets beat the Miami Marlins 2-1 in nine innings Tuesday night for a doubleheader sweep.

"I felt great," Syndergaard said. "It was amazing to get back out there."

Javier Báez dashed home from third base with the winning run in extra innings as Anthony Bass (3-9) fumbled James McCann's slow bouncer between the mound and home plate.

In the opener, Francisco Lindor homered and drove in three runs to help the Mets stop a five-game losing streak with a 5-2 victory. Marcus Stroman went five innings for his 10th win.

Syndergaard started the nightcap for New York, firing his first major league pitch in two years and finally completing a delayed comeback. With his long, blond hair blowing in the breeze, he topped out at 96 mph and struck out his first two batters in a perfect inning, throwing nine of 10 pitches for strikes.

That was it for his first time out - and he expects to make another one-inning appearance before the season ends Sunday.

After joining the Mets' rotation in 2015, the 29-year-old right-hander can become a free agent this fall.

"I'm fairly confident that we'll reach an agreement and I'll be pitching here next year," he said. "New York has a special place in my heart and always will be."

Syndergaard received a couple of warm ovations from a Citi Field crowd of 20,647 dotted with Thor signs.

Back in the dugout, he got hugs and pats on the chest from teammates when his short outing was over.

"I almost had to shed a little tear," Syndergaard said about the fan reaction. "I'm not really an emotional guy, but it definitely got to me."

It was Syndergaard's first major league game since Sept. 29, 2019. He made a pair of rehab appearances last week for Triple-A Syracuse, working a scoreless inning each time.

Trevor Williams was originally pegged to start the nightcap, but about 2 1/2 hours before the first game, the Mets activated Syndergaard from the 60-day injured list and announced he would start Game 2.


Syndergaard and the Mets initially targeted a June return, but his rehab progression was slowed by a sore elbow in late May that caused him to be shut down for a while and then a positive test for COVID-19 in late August even though he is vaccinated.

"It was definitely a crazy journey," said Syndergaard, an All-Star in 2016. "A few weeks ago, it just seemed like everything was working against me. So it just felt like a huge weight was lifted off my shoulders when I was able to get out there and compete."

All-Star rookie Trevor Rogers pitched five terrific innings for the Marlins, permitting one run and three hits with six strikeouts and no walks.

"I felt like myself again tonight. Had my feet underneath me," he said. "Might have one more but I mean if this is it, I'm glad to go out strong."

Jonathan Villar doubled in the fifth and scored on Kevin Pillar's tying single.

Miami took a 1-0 lead when rookie Jesús Sánchez clobbered a 445-foot homer on Williams' first pitch in the second.

Lewin Díaz launched a two-run homer in the first game for the last-place Marlins, who have dropped seven straight.

"I think our guys are playing hard. I'm not sure we're thinking very much. We're just kind of running and playing and not really focused," manager Don Mattingly said.

"This was a day of just too many mistakes. We're just not playing good baseball."

Stroman (10-13) allowed two runs in his 33rd start this year - most in the majors - after sitting out the pandemic-shortened 2020 season. He could make one more in the season finale Sunday before becoming a free agent.

"It's extremely gratifying," Stroman said. "I'm looking forward to free agency, however it may play out."

The athletic right-hander won for the first time in six starts since an Aug. 22 victory at Dodger Stadium and even got his first career stolen base, the first for a Mets pitcher since Jacob deGrom in August 2017.


A smiling Stroman also had some fun with Marlins leadoff man Jazz Chisholm Jr., playfully carrying him piggyback-style after they crossed paths on a play at first base.

Edwin Díaz struck out two in a perfect seventh for his 31st save in 37 chances. New York took the opener of its 14th doubleheader this year - most by a big league team since the Mets played 19 and the Montreal Expos 15 in 1979, according to the Elias Sports Bureau.

Lindor connected for his 19th homer in the sixth, a two-run shot off lefty Steven Okert.

"I think it's important for him to finish strong," said Mets manager Luis Rojas, who got his 100th career win in the opener.

New York, eliminated from playoff contention last weekend following a second-half swoon, had dropped 10 of 11 heading into its final home series of a disappointing season.

The single-admission doubleheader, with both games scheduled for seven innings under pandemic rules, was played to make up a Sept. 1 rainout at Citi Field.

Marlins: 1B Jesús Aguilar had season-ending arthroscopic surgery on his left knee in Miami and is expected to be ready for spring training. ... RHP Pablo López (strained rotator cuff) was unable to throw live batting practice because of afternoon rain so he threw about 45-50 pitches in a bullpen, simulating innings with hitters standing in. He still hopes to pitch in a big league game before the season ends. ... SS Miguel Rojas (toe) sat out the opener but batted leadoff in the second game.

Mets: With the Mets eliminated, Rojas said deGrom won't pitch again this season. The two-time Cy Young Award winner has been sidelined since mid-July because of an elbow injury that's healed, according to the club.