Tate: Johnny Manziel 'a human being' 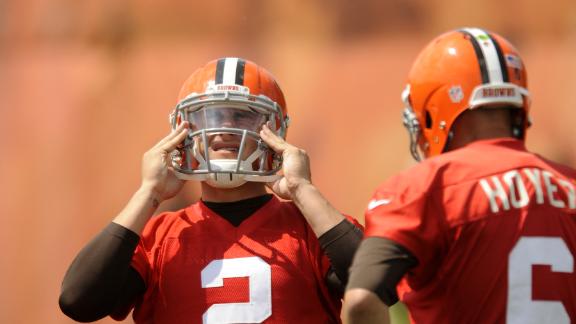 BEREA, Ohio -- Cleveland Browns running back Ben Tate reiterated Tuesday that Johnny Manziel receives too much attention too soon in his career.

Tate said if he were Manziel, he'd be weary of the attention.

"It's just as a player I know that I would get tired if people were constantly monitoring if I picked my nose, if I spit to the left or right," Tate said. "I mean, it's annoying. He's a human being.

"He's a great football player so I understand why he gets some of the constant media attention. At the same time I just figure at this stage he's tired of it and he wants to come in here and do his job and try to win the starting quarterback position."

Manziel did not address the media Tuesday but has said he doesn't fully understand the attention.

Tate made similar comments during the weekend at an NFLPA event, saying Manziel had "won the Heisman or whatever" but he had yet to play a down in the NFL.

That must have led to some criticism on Twitter as Tate tweeted the following:

And for ppl trying to say I dissed Johnny I got 1 finger up to yall and it's not my pointer. My point was I'm sure he is tired of it all

- Ben Tate (@BenTateRB) June 3, 2014And just wants to be left alone to play football y'all too worried about what he does in his everyday life that's all I was saying

- Ben Tate (@BenTateRB) June 3, 2014Tate qualified his praise of Manziel for his best throw of the day, a right sideline to left sideline throw to Jordan Cameron that would have gained 40 or so yards.

"It was a good football play," he said. "It's not anything I haven't seen before."

Then he concluded his interview Tuesday with a rant at the media.

"Y'all just hype everything up and make everything bigger than it is," he said. "That's what y'all are standing over here for, right?"

"Y'all just want to report the fastest story nowadays," Tate said. "Y'all don't necessarily check sources or see if they're right anymore."

During the day, Tate also was tweeting with fans before he was to throw out the first pitch at the Cleveland Indians' game Tuesday night, and he took 44 fans with him, matching his jersey number.

Manziel is competing against Brian Hoyer for the starting job.

A bar in Fairview Park, Ohio, in the suburbs west of Cleveland, six miles from Hoyer's hometown of Lakewood, Ohio, has made it clear who it is rooting for with a message on its sign, verified by the bar's staff after a photo of it was posted to Twitter:

- NotTomHamiltonCLE (@TomHamiltonCLE) June 3, 2014Information from ESPN.com's Darren Rovell was used in this report.