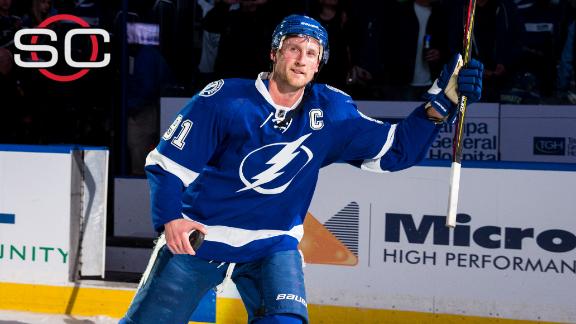 Tampa Bay Lightning general manager Steve Yzerman is ending the Steven Stamkos trade speculation before it can heat up.

On Monday, the Lightning released a statement from Yzerman that their captain will not be moved before the NHL's trade deadline on Feb. 29.

"I have said repeatedly that it is our hope to reach an agreement with Steven on a new contract at some point, and with 27 games remaining in the season, our entire organization, Steven included, wants to focus on making the playoffs," Yzerman said in the release.

Last week, Stamkos was asked whether he would waive his no-movement clause before the deadline and left the door slightly open for a possible trade, a door that has since closed.

"I haven't even thought about that," Stamkos said, according to the Tampa Bay Times. "I think the answer is we'll cross that bridge at the time, and I don't think that time is now."

During an interview with ESPN.com's Pierre LeBrun during the All-Star break, Stamkos expressed a desire to remain in Tampa the rest of the season.

"My view hasn't changed. I want to win with Tampa," Stamkos told LeBrun. "I don't think that's going to change between now and 30 days from now."

The Lightning and Stamkos' agents at Newport Sports are in negotiations for a contract extension with his current deal expiring July 1. If he hits free agency, Stamkos would be the most prominent NHL unrestricted free agent in years.

Stamkos is in the final season of a contract worth an average of $7.5 million per year. Using contracts signed by Anze Kopitar, Jonathan Toews and Patrick Kane as comparable deals, the next Stamkos deal projects to be worth more than $10 million per season.

"I will keep the negotiating process strictly between the involved parties and have no further comment on the state of those negotiations," Yzerman said in the release.