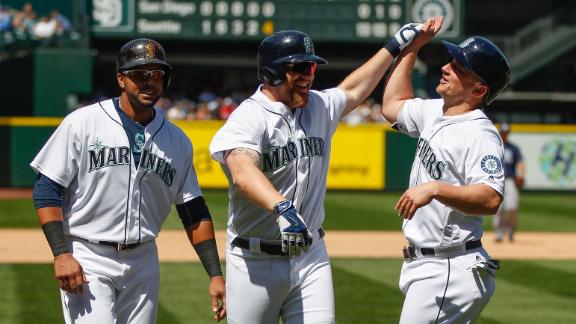 These are just some of the words San Diego Padres executive chairman Ron Fowler used to discuss his team's play this season.

Fowler's exasperation was on display during a radio interview with ESPN's The Mighty 1090 in San Diego on Wednesday, one day after the team was drubbed 16-4 in Seattle to conclude a 1-7 road trip.

"It's been embarrassing," Fowler said. "I don't know how else to put it. Our performance on the road trip, 1-7, was pathetic.

"I'm a very competitive individual. I think I've won a lot more than lost in my life. This baseball experience has been very frustrating, very embarrassing."

Though Fowler called the team "miserable failures" for getting off to a 20-33 start that had the Padres 12 games out of first in the NL West entering Wednesday's games, he spared first-year manager Andy Green and his staff from criticism.

"In terms of the manager and coaching staff, we've got as good a group or a better group than I've seen," Fowler said. "They're doing what they need to do. Part of it is on the players."

And the player Fowler singled out was struggling ace James Shields, who got rocked for 10 runs in less than three innings in Tuesday's loss to the Padres.

While noting that Fowler is "obviously frustrated," Shields didn't seem to take Fowler's critique too personally.

"Obviously, kind of calling me out," Shields said before Wednesday's game. "It was more or less the game that I pitched. I think I've been pitching well all season long for the most part. But I guess it's kind of the tip of the iceberg right there."

"It's on the player, but the organization has to accept responsibility for probably having the wrong players," Fowler said. "We don't have a team out there right now that is competing effectively. We're doing everything we can going into the draft and looking at international signings to get some guys who can get us there."

The task of finding the right players has fallen on general manager A.J. Preller, who has been praised for building up the Padres' minor league system but has failed to deliver at the major league level.

"I will say he has done a spectacular job of building the player-development area," Fowler said. "I think the players we have in the farm system now as a group are stronger than they have been before.

"We rolled the dice with him on some major league signings, major league trades. We collectively have to look at that and say it didn't come together as well as we wanted."

Preller will get his next crack at positioning the Padres for the future at next week's amateur draft as San Diego holds six of the top 85 picks.

For now, the Padres hope they can get things on track during a stretch in which 12 of their next 15 games are at home in Petco Park, starting with Wednesday's game against theSeattle Mariners.