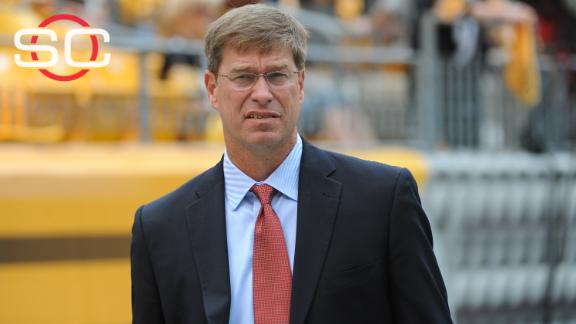 NASHVILLE, Tenn. -- The Tennessee Titans announced Monday they will not renew the contract of executive vice president and general manager Ruston Webster, who has held the post since 2012.

"I would like to thank Ruston Webster for all of his efforts with our franchise, as he is a man of great character and integrity and someone for whom we I have tremendous respect," Titans controlling owner Amy Adams Strunk said in a statement. "Our mission is to become one of the elite franchises in the National Football League, and we have fallen short of this goal in recent years."

She said the Titans have begun their search to fill both the general manager and coaching positions this week. The team said interim coach Mike Mularkey is a candidate to remain coach and will be interviewed as part of the search process.

"We share our fans' frustration about the team's recent performance, and we are committed to doing everything we can to return our team to a perennial postseason contender," Adams Strunk said.

Tennessee's 18-46 record during Webster's tenure is tied for the second worst in the NFL.

Webster joined the Titans in 2010 as vice president of player personnel and was elevated to the GM job two seasons later.

While he worked under three different owners and with three different head coaches with a major defensive change halfway through his term, the Titans' draft record with Webster as GM was poor.

He drafted Marcus Mariota second overall last season and picked the team's defensive signal-caller, inside linebacker Avery Williamson, in the fifth round in 2014.

But the team's No. 10 pick in 2013, Chance Warmack, has not played like a high-level guard, and the team's second-round picks from 2012 through 2014 (linebackerZach Brown,receiver Justin Hunter and running back Bishop Sankey) barely contributed in 2015.

Steve Underwood was retained as CEO and president on a permanent basis, the team announced Monday.

"I feel his leadership is vital in order to move us forward," Adams Strunk said of Underwood. "He has brought much-needed stability to our organization, and I look forward to progress that will be made under his leadership.

Underwood said the Titans' intention is to have a traditional GM/coach pairing and division of power, by which the two don't have to agree on everything but can hash out decisions.

"We've always had the same system as long as I've been associated with our organization, which is genuine collaboration," Underwood said. "We believe that that's very doable -- that both those men can work together to achieve the same result. Contrary to popular belief, you don't really want two men who are in lockstep about every decision that they make.

"What you want is people who are willing to work through their differences and come up with solutions that make a team better."

The team has already submitted requests for permission to interview candidates. Adams Strunk, Kenneth Adams IV (who is a member of the team's board of directors) and Marino will join Underwood in the process. Marino is heading football operations while the team is without a GM.

Underwood said the first interview for GM will be scheduled within 48 hours and said there is no template for which position must be filled first and that there is no timetable.

"As long as it takes to get the right people," he said.

Underwood said a new GM needs to be "steeped in evaluation of football talent."