The best commercials from the 2016 Super Bowl 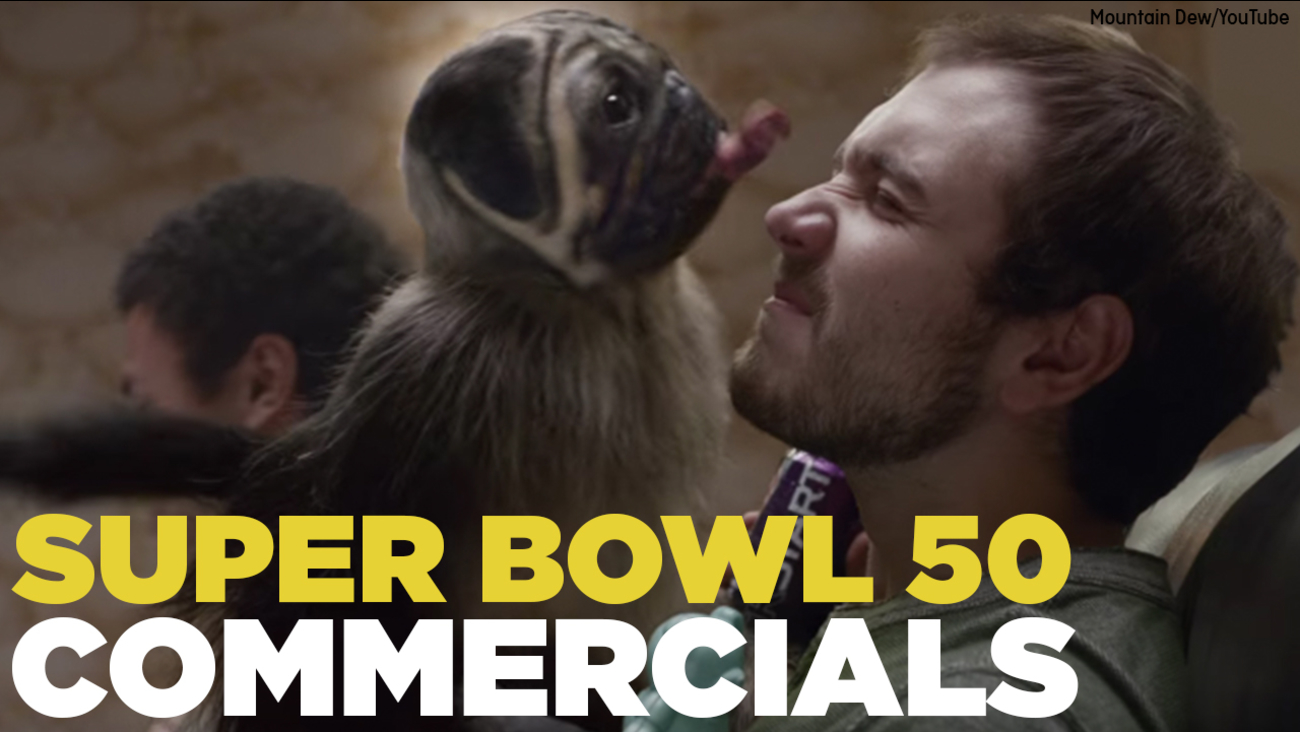 Mountain Dew's "Puppymonkeybaby" ad is memorable, whether you like it or not. (Mountain Dew/YouTube)

WABC
Whether you're into football or not, you can always count on the entertainment factor of the commercial ads that run during the Super Bowl. Some brands chose to be touching or thought-provoking, while others tried their best at humor -- for better or worse. Here are our top picks from Super Bowl 50.

Christopher Walken stars in this ad for the 2016 Kia Optima, doing an incredible impersonation of himself as an ominous walk-in-closet phantom who describes "the two types of people in the world." Walken manages to convince a proverbial "uninspired and bored" pair of beige socks to stand out and acquire some "pizzazz" that is promised with the new Kia Optima.

Keeping with their standard "you get a little cranky when you're hungry" campaign, this spot casts Willem Dafoe as a cantankerous Marilyn Monroe, sporting her infamous white cocktail dress on set of The Seven Year Itch. "This is a disaster," Dafoe exclaims. "Who's the genius who puts a girl in heels on a subway grate?" After satisfying her hunger with a snickers bar, Monroe is ready to film. Eugene Levy cameos as the fan operator beneath the subway grate.

Set to Salt 'N Pepa's "Whatta Man," two women drive their 2017 Hyundai Elantra through the suburban town of Ryanville, populated entirely with hunky men, all played by Ryan Reynolds. As they get understandably distracted by all the man-candy around them, their car does not, thanks to what Hyundai claims is an "auto emergency braking with pedestrian detection."

In this ad we follow aliens taking a tour through the "Museum of Earthly Wonders." Naturally, humans are perceived as incredibly inept with our inability to solve a Rubik's Cube, and an alphabet comprised entirely of Emojis. Despite also housing artifacts like a commercial airliner and Scott Baio, the most impressive bounty within this museum are the "always in season" avocados from Mexico.

Audi got a special, though bittersweet, recognition with Twitter users in this ad set to David Bowie's "Starman," given the artist's recent death last month. Reflecting on memories of the golden years of the Space Age, a retired astronaut is given a new thrill of life as he test drives the new Audi R8 V10.

Mountain Dew went off the deep end in their ad for its Kickstart drink that promises "three awesome things combined." When three friends are too tired to go out, the abominable Puppymonkeybaby creature emerges with a bucket of Kickstart, and leads them on a hypnotic conga line outside. The Puppymonkeybaby's crude animation resembles stop-motion, giving an even more polarizing effect to audiences. Love it or hate it, you won't be able to bore the image of Puppymonkeybaby out of your head for years to come.

One of our favorite ads this year was about a flock of musical sheep who have managed to learn all the words to Queen's "Somebody To Love." As the sheep farmer delivers new members of the flock in the bed of his 2016 Ridgeline Honda, he activates the truck-bed audio system that blares out the infectious tune for all to hear. And as soon as he leaves, the sheep continue their a'cappella rendition.

Jeff Goldblum returns as Brad Bellflower, the Apartments.com spokesperson, singing a special rendition of "Movin' On Up." While scaling to the top of a Manhattan skyscraper via a crane-lifted baby grand piano, Goldblum moves on up to the "deluxe apartment in the sky."

Doritos' 10th annual "Crash the Super Bowl" contest once again delivered an ad that is sure to have people talking. An expecting mother and father are at an ultrasound appointment when the woman becomes upset at her partner munching on Doritos. The baby-daddy becomes amused at the fetus tossing around inside the womb, trying to grab a Dorito chip as he waves it around the mother's stomach. The mother then angrily throws the chip across the room... and the baby makes a break for it, sending the mother into horrifying labor pains.

Capitalizing on the much-talked-about presidential elections this year, Seth Rogen and Amy Schumer are advocating for a party everyone can support -- the Bud Light Party. While the nation may be divided during this time, Rogen and Schumer claim that there's plenty of things we can agree to enjoy, like Paul Rudd. And, possibly, Bud Light.

Sure to win everybody over with cuteness overload, Heinz's spot features a slow-motion montage of dachshunds stampeding toward several people dressed as humungous condiments, set to Harry Nilsson's "Without You."

In a sobering spot, Helen Mirren, "a notoriously frank and insensitive British lady," asks the Super Bowl audience to think twice before driving drunk, claiming that "if you drive drunk you, simply put, are a short-sighted, utterly useless, oxygen-wasting human form of pollution; a Darwin Award-deserving selfless coward. If your brain was donated to science, science would return it." We agree, and ask that you drink responsibly.

Comedy duo Keegan-Michael Key and Jordan Peele are cast as Lee and Morris, two aspiring commentators without a clue. The ad promotes their live coverage event of the Super Bowl, which offers a satirical approach to the game's coverage in true Key & Peele fashion.

Celebrating 20 years of the addictive Nintendo game series, this spot features several live-action game masters of who inspire each other toward greatness, claiming "I can do that." The spot culminates with a live-action version of Pokemon hero Ash entering an arena full of ferocious Pokemon.

Aerosmith's Steven Tyler isn't happy with an artist's portrait of him, made entirely of Skittles. When the portrait claims it can sing "Dream On" just as good, Tyler challenges it to sing the chorus note higher and higher. That is, until, it explodes into a pile of Skittles just as any human would if they tried.

The inside-joke ad stars Drake as himself while trying to complete a cellphone carrier commercial shoot, featuring his very fitting song, "Hotline Bling." The ad executives interrupt Drake's performance, asking him to include changes to his lyrics that feature contractual stipulations such as the fact that streaming music will incur data charges. "These changes don't ruin the song at all," claims an extremely patient Drake before the executives ask that they be in the commercial as well.

Bringing attention to water shortages worldwide, Colgate does its part to curb water wasting in a stunning ad that encourages the audience to not run the faucet while brushing their teeth. In the ad, Colgate claims that this can waste up "4 gallons of water" every time, which is more water than many people around the world have "in a week."

Comedian T.J. Miller is being heckled by a Shock Top tap handle with an "unfiltered" mouth, claiming Miller looks like "an out of work magician." It then pitches him its greatest idea for a movie about a loser who walks into a bar...

Known for her retro sound, Janelle Monae dances through more than 50 years of Pepsi ads. From The Countours' 1962 classic "Do You Love Me," to Madonna's 1989 hit "Express Yourself," Monae ends with her own rendition of Pepsi's iconic jingle "The Joy of Pepsi-Cola."

This ad takes "overprotective dad" to a new extreme. Kevin Hart lends out his new car out to his daughter's date, but little does the young couple know that Hart plans to use the "car finder" feature to keep a very, very close eye them. Hart's constant presence spooks the young man so much he ends the date early. 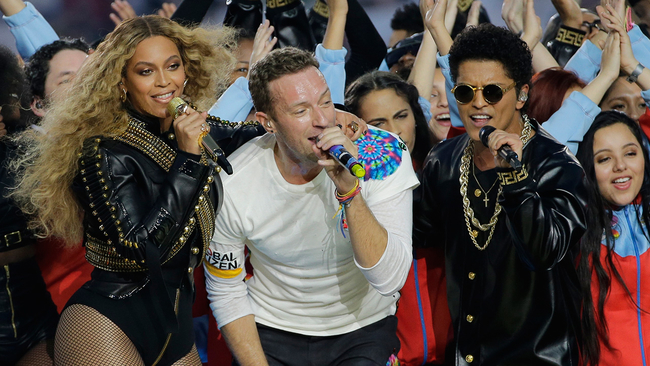 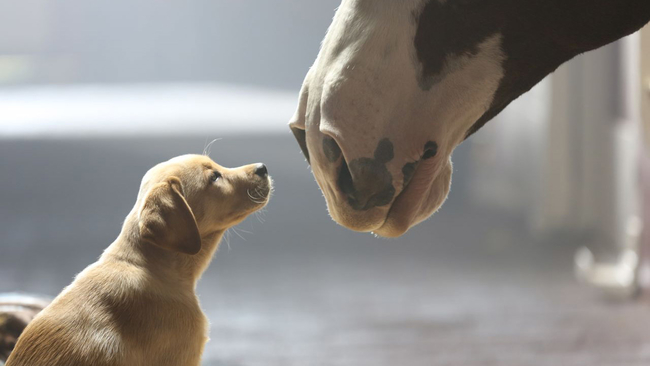 Our 12 favorite Super Bowl commercials of all time
DISTRACTION