The most feared lineups in baseball 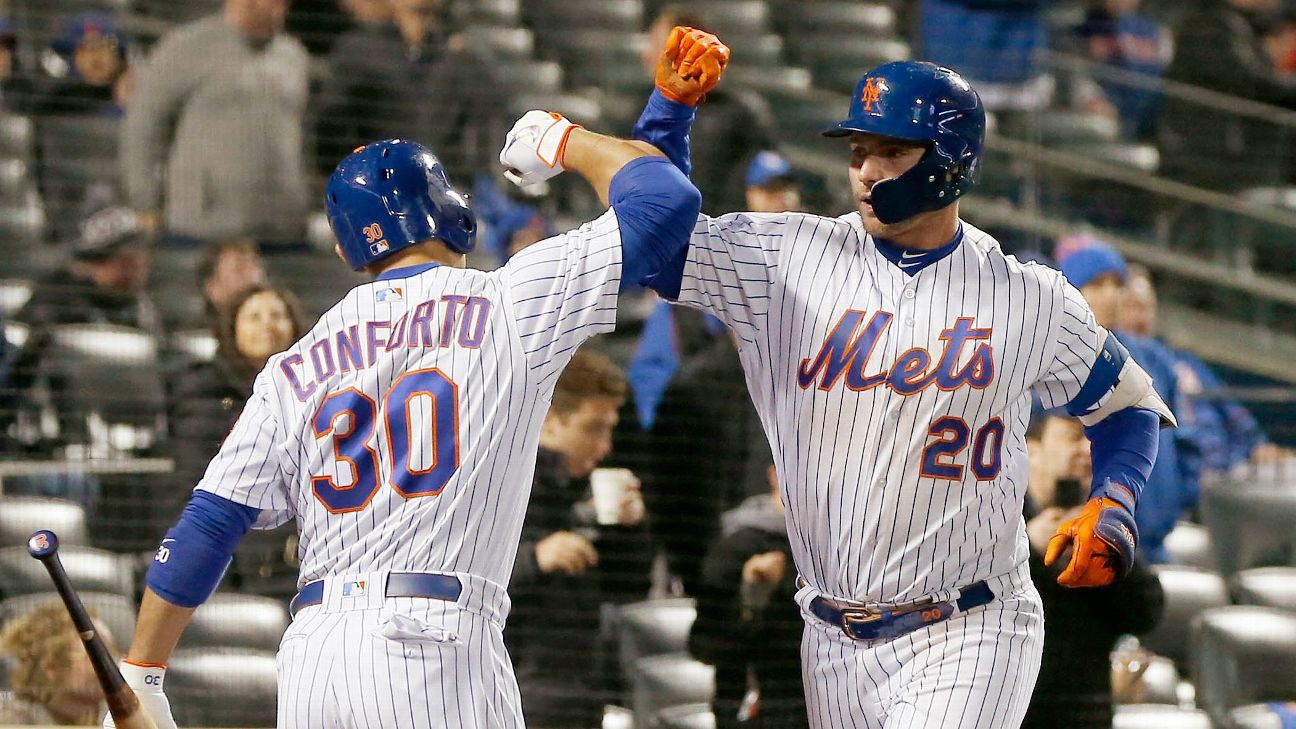 Most teams have played at least 16 games so far, or one-tenth of the schedule. It's early. Heck, players are still wearing ski masks in some parts of the country, and it was so cold and windy Monday night in Philadelphia that Noah Syndergaard had to tie his flowing mane into a ponytail to prevent it from whipping into his face.

So don't overreact to your team's start just yet -- hot or cold. Things can turn around with one good (or bad) week. It's worth noting, however, that leaguewide rates tend to stabilize pretty quickly, and so far home runs and runs scored are up from 2018 (so are walks and strikeouts). Through Monday's games, the MLB average of 1.31 home runs per game would break the 2017 record of 1.26. The average of 4.68 runs per game would be the highest since 2007, even though the leaguewide batting average of .244 would be the lowest since 1972.

Anyway, with offense up in the early going, let's take a look at what we've seen from some of the lineups across the majors. (All stats through Monday.)

MLB's scariest lineup | Lineups that can get better | The worst lineups

The Mariners have homered at least once in each of their first 20 games after homering again Tuesday, although the bats have slowed down -- facing Justin Verlander, Gerrit Cole, Trevor Bauerand Shane Bieber in succession will do that. Still, that's a record for home runs from the beginning of the season; they have a ways to go to catch the 2002 Rangers, who homered in 27 consecutive games. Entering Tuesday, the Mariners had more home runs than the Tigers, Giants, Pirates and Indians combined.

Want a few keys to their early success? First, they have the fifth-lowest chase rate, so they're swinging at strikes. Second, they have the highest average launch angle in the majors, so home runs. Third, they faced the White Sox and Royals.

The question: Can Dan Vogelbach & Co. keep things going? How predictive is a hot April for an entire lineup? I checked the three best offenses in each league over the past five seasons:

We'll see where the Mariners end up, but only two teams in this stretch averaged even six runs per game in April, the 2017 Nationals and 2016 Cubs (both made the playoffs). As you would expect, only three of our 30 hot lineups improved from April over the course of the season, with the average drop 0.58 runs per game by the end of the season (meaning the average runs per game from May 1 on was even larger than 0.58 runs).

How unusual is a stretch of 130 runs at any point in the season? Looking only at the past three seasons (with offensive levels similar to 2019), it's not that crazy, but it's still impressive. Not counting overlapping streaks, it happened four times in 2018, eight times in 2017 (including two different stretches by the Astros) and three times in 2016. The top stretch last season was 137 runs by the Rangers from July 22 to Aug. 10. The Rangers lost 95 games and finished just seventh in the American League in runs scored.

What's interesting here is the Mariners might have hit a couple of lottery tickets in Jay Bruce and Tim Beckham, who were good in 2017 and awful last season. But both have been terrible on defense and we'll see how the Mariners realign things once Kyle Seager returns and when and if they call up J.P. Crawford to play shortstop (he's off to a good start at the plate in Triple-A). Those changes could mean less offense, but better defense to help a shaky pitching staff.

Anyway, of that list of 30 teams, 16 made the playoffs. That's much better odds than FanGraphs gives the Mariners of making the playoffs -- just 8.7 percent. The site projects the Mariners to average a more reasonable 4.68 runs per game the rest of the way. I'm optimistic: I'll take a slight over on that, buying into some of the early improvements.

Scariest Lineup the Rest of the Way: Los Angeles Dodgers (6.28 runs per game)

The Dodgers blasted a record eight home runs on Opening Day and scored 29 runs in a three-game sweep at Coors Field, but then they lost six in a row to the Cardinals and Brewers, erasing their air of invincibility. The Dodgers hit 235 home runs last season, third most in National League history, and the early returns suggest they can break the 2000 Astros' National League record of 249.

Cody Bellinger has been an absolute monster, hitting .433/.513/.925 with nine home runs through 18 games. The scary development for opposing pitchers is Bellinger has more walks than strikeouts and has cut his K rate from 23.9 percent to 11.5 percent. Note that strikeout and walk rates stabilize much earlier than other statistics for hitters, so if Bellinger's strikeout rate is going to take a big dip, that means more balls in play and a higher average than his .260 mark from last year. He was hit in the knee with a pitch Monday and left the game, but X-rays were negative and he should be back in the lineup Wednesday.

Can the Dodgers score six runs per game for an entire season? Unlikely. Since the extreme rabbit-ball season of 1930, the only NL team to do that was the 1953 Brooklyn Dodgers, who averaged 6.16 runs per game. Only three other NL teams have averaged 5.75 runs per game -- the aforementioned 2000 Astros and two teams that played in Coors Field. Still, with Max Muncy looking like 2018 wasn't a complete fluke, Joc Pederson locked in, Enrique Hernandez thriving in an every-day role and Austin Barnes hitting well so far, the lineup goes eight deep -- and Corey Seager, Justin Turner and A.J. Pollock haven't even done much yet (just three home runs combined).

Scarier Than You Think Lineup: Chicago Cubs (6.20 runs per game)

This one might surprise you since it's all gloom and doom out of Wrigleyville with the under-.500 start and the struggles on the pitching side of things. They're doing this even though Anthony Rizzo (.182), Kris Bryant (one home run) and Kyle Schwarber (.192) are off to slow starts. Willson Contreras and Jason Heyward have been the team's best hitters, with OPS totals north of 1.100. Yes, the offense left a bad taste at the end of 2018 for Cubs fans when it scored two runs over 22 innings in the division tiebreaker and wild-card game, but this was good offense with some obvious bounce-back candidates for better seasons in Bryant, Contreras and Rizzo.

Here's something interesting for my fellow baseball nerds to follow: The National League teams have outscored the American League teams so far, 4.72 runs per game to 4.65. The last time that happened was 1974, as the designated hitter (instituted in 1973) gave the AL an obvious edge to scoring more runs. Seven of the top 10 offenses so far are NL teams.

You start with Big Pete Alonso, he of the Saturn rocket exit velocities. Brandon Nimmo has transformed into a prototypical yet valuable Three True Outcomes kind of player. He gets on base and scores runs. Michael Conforto is off to a good start and this could be the season he puts up 35 home runs. Jeff McNeil is the opposite of Nimmo, a throwback who puts the ball in play without much power, but he's hitting .404. Wilson Ramos gives the Mets some offense at catcher and Amed Rosario is starting to show potential at the plate. J.D. Davis has taken advantage of some injuries and looks like an effective platoon bat against left-handers.

The Mets haven't finished in the top three in the NL in runs since 2008 and they haven't led the league since 1990, but this looks like their best offense in a decade. Now if only Robinson Cano can get going ...

The 'Relying on the B Team' Offense: New York Yankees (4.87 runs per game)

My projected best offense in the majors heading into the season, the Yankees played the Red Sox on Tuesday without Giancarlo Stanton, Gary Sanchez, Aaron Hicks, Miguel Andujar, Greg Bird or Didi Gregorius. They still beat up on Chris Sale and Erasmo Ramirez in an 8-0 victory. Andujar has been hitting in a cage, Hicks and Stanton have started some soft-toss work, and Sanchez's stay on the injured list with a calf strain should be short. In another two weeks, the Yankees should be much closer to full strength. Watch out.

It hasn't been just the pitching that has the Red Sox off to a slow start. The offense has struggled as well, as they're down more than a run per game from last year's 5.41. To be fair, Betts actually hasn't been awful, hitting .222/.324/.413 entering Tuesday. Jackie Bradley Jr. has been much worse (.149/.196/.170) and the Red Sox are getting very little from catcher and nothing from second base (.145/.197/.161). Things took a turn for the worse against the Yankees as James Paxton destroyed them on two hits and 12 strikeouts in eight shutout innings.

The They Haven't Been Clutch Yet Lineup: Houston Astros (4.19 runs per game)

That Astros rank just 20th in the majors in runs per game, but when you dig deeper, they have fewer concerns about their lineup than the Red Sox. They actually lead the majors in batting average (.280), rank sixth in OBP (.349) and fourth in slugging (.471). They've just hit poorly with runners in scoring position (.215). Based on their offensive output, they should be scoring 5.29 runs per game. (Yes, baseball doesn't exist in a theoretical "should have" world. The point is the Astros are a good bet to start scoring a lot more runs. Considering they still entered Tuesday with a nine-game win streak, all is fine in Astroland.)

They were last in runs in 2018 and are a good bet to finish last again. The sad thing is it's not even that young of a lineup: Lewis Brinsonturns 25 in May and he's the youngest regular. Based on Baseball-Reference.com's average age formula (weighted for games played and at-bats), the Marlins have the 10th-oldest lineup in the majors (older than the Red Sox, Yankees or Dodgers). So there isn't even much future upside to dream on.

'They Used To Be Good' Bad Offense: San Francisco Giants (2.76 runs per game)

The Giants have been next-to-last in the NL in runs scored each of the past two seasons, and while some of that is playing in a tough hitters' park, bringing back essentially the same group of players means a turnaround is unlikely. They were hitting .199 entering Tuesday's game, with Buster Posey, Evan Longoria, Brandon Crawford and Gerardo Parra combining for a .207 average and one home run in 213 at-bats. Ouch. (Longoria did hit his second home run Tuesday.)

Through 15 games they were hitting .201/.283/.312 with seven home runs. Somehow they still went 8-7. Miguel Cabrera and Nicholas Castellanos are both seeking their first home runs and, shockingly, signing the 2018 Pirates' middle-infield combo has not provided a jolt to the lineup.