Thibs: Rose is 'not real comfortable' 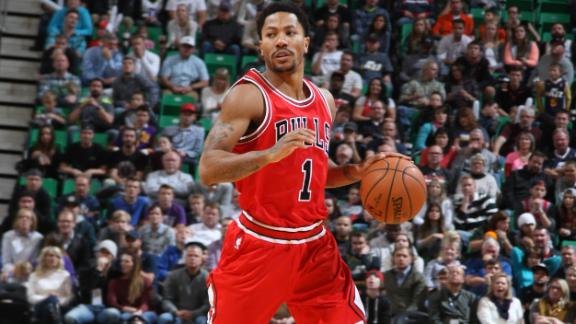 SALT LAKE CITY -- Chicago Bulls point guard Derrick Rose returned to the floor in Monday night's 97-95 win over the Utah Jazz after missing the previous four games because of a strained left hamstring.

Rose went 5-for-10 from the field with 18 points, five assists and three rebounds in 25 minutes, but it was Bulls coach Tom Thibodeau's comments that might draw more attention than Rose's play.

Asked whether Rose looked fatigued in the second half of Monday's game, something the 26-year-old discussed before Monday's shootaround in regard to his muscle recovery after missing more than a week, Thibodeau chafed.

"Oh, I don't know. Jesus. He's got to get out there and play," Thibodeau said. "I thought he did a lot of good things. You could see he's not real comfortable with the ball yet, but that will come. When Derrick strings some games together, he's going to take off. He's got to go. That's the bottom line. He's got to go."

Rose has tried to be cautious about his future and has missed eight games overall after missing four earlier in the season because of sprained ankles. But the former All-Star seems to understand that Thibodeau is frustrated by his on-again, off-again health status. Monday marked just the third time this season the Bulls' starting five of Rose, Joakim Noah, Mike Dunleavy, Pau Gasol and Jimmy Butlerplayed together.

"It's been time," Rose said. "To me, it's been time. Every injury is a setback a little bit, but as far as emotions and everything, how hard I worked, it's been consistent with how I'm feeling, being positive. And it's been a minute since I've played. This is the first one, and now it's behind me and now we're on to Denver."

Rose started off aggressively Monday, scoring 10 points in the first quarter, but he didn't look as comfortable as he has in the past while driving to the rim.

As for the biggest flaw in his game after missing more than a week, Rose acknowledged he has to keep his turnovers down. He had four turnovers on the night.

"Turnovers," Rose said. "Slowing down with turnovers. I know everything else is going to come -- conditioning, the wind, my shot is there -- it's just that I had too many turnovers tonight, and I think that that's one of the reasons they got in the open break and got some easy baskets, because of my turnovers."

It was clear the Bulls' offense moved well with him on the floor. His ability to penetrate when he wants to opens up things for his teammates.

"He makes a lot of things easier -- on both ends of the floor," Butler said after scoring a game-high 25 points. "He's always finding guys for open shots, and he draws so much attention that if he don't get the shot that he wants, you better be sure that he's going to get one for somebody."

As for the Bulls' other injury woes, Gasol scored 23 points and grabbed nine rebounds in 37 minutes after missing the previous three games because of a strained left calf.

"I feel pretty good," Gasol said. "A little fatigued. I didn't have any setbacks or anything like that; I felt pretty good throughout the game. I just got to get back into a rhythm."

Guard Kirk Hinrich missed his second straight game because of bruised ribs. Hinrich said Monday morning that he was feeling a little better, but he is still questionable for Tuesday's game against the Denver Nuggets. Noah got poked in the left eye in the second half of Monday's win but hopes to play against the Nuggets.

Power forward Taj Gibson missed Monday's game as he continues to recover from a sprained left ankle suffered in Friday night's loss to the Portland Trail Blazers. Gibson returned to Chicago over the weekend to get treatment on the ankle, and it is unclear whether he will rejoin the Bulls on the rest of this trip, which ends Sunday in Brooklyn.

As is always the case with the Bulls, Rose's lingering status continues to hover over everything they do. Thibodeau is optimistic that both Rose and Gasol will be able to play against the Nuggets in the back end of the back-to-back.