Tim Tebow works out for Eagles 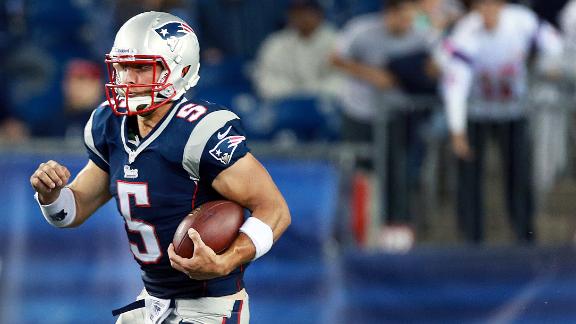 Former NFL quarterback Tim Tebow worked out for the Philadelphia Eagleson Monday, a source told ESPN NFL Insider Adam Schefter, but the team is not planning to sign him at this time.

Tebow, who has been working for ESPN and as an analyst for the SEC Network, last played in an NFL regular-season game in 2012, when he was with the New York Jetsafter playing two seasons with the Denver Broncos.

He also was in training camp with the New England Patriots before he was released in August 2013. He struggled to find consistency with the Patriots, completing 11 of 30 passes for 145 yards and two touchdowns and two interceptions in three preseason games.

"I will remain in relentless pursuit of continuing my lifelong dream of being an NFL quarterback," Tebow wrote on Twitter after he was released by New England.

Tebow, who entered the NFL after a memorable college career that included two national championships at Florida, completed 47.9 percent (173 of 361) of his passes for 2,422 yards with 17 touchdowns and nine interceptions while rushing for 989 yards and 12 scores in his pro career.

The Eagles already have created plenty of speculation over their quarterback position this offseason, having traded Nick Foles to the St. Louis Rams to acquire Sam Bradford. The Eagles also re-signed Mark Sanchez to a two-year deal worth $16 million.

Tebow's multiyear deal with the SEC Network does not preclude him from continuing to pursue opportunities in the NFL.