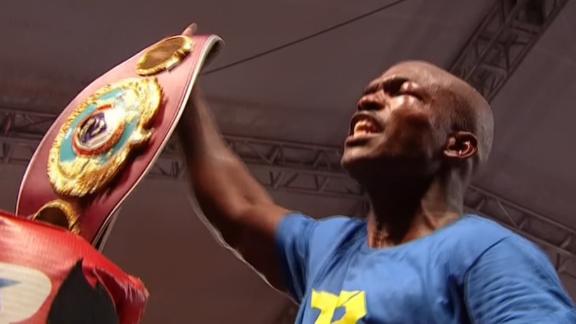 CARSON, Calif. -- The last time Timothy Bradley Jr. was in the ring at the StubHub Center, he was one half of an epic collision with Ruslan Provodnikov that was the consensus 2013 fight of the year.

While he and Jessie Vargas did not turn in a fight of the year, Bradley turned in a strong performance in a fast-paced and exciting fight to win a unanimous decision and a vacant interim welterweight title before 4,711 on Saturday night. But there was tremendous drama and confusion in the final moments of the fight, when it appeared to many that Vargas had scored a miracle comeback knockout.

Bradley, seemingly with the fight well in hand, got badly rocked by a Vargas overhand right in the waning moments of the 12th round. He was staggered, and when a ringside official then slammed together the clapper to signal 10 seconds were left in the round, referee Pat Russell thought the final bell had sounded and stopped the fight.

The crowd -- and Vargas -- thought he was calling it a knockout when, in fact, he was stopping the fight because he thought the round was over. But Vargas leaped onto the ropes thinking he had won, and the crowd went wild.

"He caught me with a good shot at the end," Bradley said. "The ref thought that he heard the bell. I was good enough. I could have maintained. I grabbed hold of him toward the end of the fight and I was squeezing him so tight it was like his mom was holding him.

After the scores were announced, Vargas asked Bradley, "Can I get a rematch, man?"

Bradley responded, "I told you. Talk to your people. Let's do this. It was a great shot, man. You caught me and you hurt me. But I would have finished -- I ain't going to lie -- with 10 seconds left."

Bradley is likely to become a full titleholder after Friday, the WBO-imposed deadline by which champion Floyd Mayweather must pay the sanctioning fee from his May 2 title unification victory against Manny Pacquiao and vacate his two junior middleweight alphabet belts, because the WBO prohibits fighters from holding titles in multiple weight classes at the same time. Bradley had already won four other world titles between the welterweight and junior welterweight divisions.

Russell, long one of boxing's elite referees, said ending the fight at the clapper rather than the final bell was an honest mistake.

"It was very loud in that 12th round and I thought I heard the bell and the fight was over when the bell went off," Russell said.

Upon watching the replay of the ending sequence, Russell added, "[Bradley's] hurt. He's still hurt and still on his feet. He's working a bit, he's in it. Sounded like the bell to me. But you don't always hear the 10-second warning. You'd like to, but what I thought I heard was the bell. I made the call that I made based upon what I heard. That's all I can say. It was an honest call based on an honest reaction."

Vargas, a junior welterweight titleholder who was moving up in weight, said he thought he had scored a knockout and was disappointed with the ruling.

"It was over. I heard something and I hit him with a shot," Vargas said. "I came up and threw three to four shots. We were in the clinch so I still let my hands go and he was still very wobbly and [Russell] stopped the fight. But the fight was still going on. That was just the 10-second mark.

"[Bradley] was out. Was he not out? All I needed was one shot and that's what I was looking for. Pat Russell came in and it was an honest mistake on his part. I think we all acknowledge the fact that it was a mistake, but I think those 10 seconds cost me the fight."

Vargas had not done a whole lot leading up to the dramatic final moments, however, even though the CompuBox punch statistics were fairly close. Bradley landed 232 of 676 punches (34 percent), and Vargas connected on 203 of 630 (32 percent).

By the fourth round, an increasingly dominant Bradley bloodied Vargas' nose and forced him to hold when he landed clean shots with both hands. They also missed some wild haymakers.

Bradley continued to go at Vargas and landed a heavy overhand right in the sixth round. Vargas smiled, but it landed cleanly and Vargas had no answer.

Bradley did not let up, either. By the seventh round, Vargas' face was showing the impact of the punches. His defense was poor and Bradley seemed to find every opening.

After Vargas appeared to have an excellent seventh round, Bradley was back in control. He had a strong showing in the ninth, landing solid jabs and overhand rights. Vargas, who raised swelling around Bradley's left eye, rarely could blunt his relentless attack.

"[I was] just outboxing him, man," Bradley said. "I knew I was ahead on the scorecards. I figured I would move and let him take the initiative so I could counter him. When I was the one coming forward, he was looking for that jab and that overhand right."

"He caught me at the end with that overhand right over the top," Bradley said. "He snuck it over and hurt me. But I could have continued. I survived Provodnikov. Come on."

Bradley broke down the final sequence while watching the replay of Vargas' right hand.

"He stepped in and caught me clean with an overhand right, but look at me -- I'm backing up," Bradley said. "You see my hands up. I grabbed ahold of him right there. See that? See that? If the ref wouldn't have let go I would have grabbed hold of him again. I'm an experienced fighter. I know what I'm doing in there."

Bradley said there was no reason for Russell to stop the fight.

"I didn't go anywhere, baby," he said. "I was still there and I was still alive. Perfect shot. I didn't go down. Look how strong my legs are. I know where I am and I know exactly what I'm doing [after getting hit]."

Vargas said his new trainer, Mexican legend Erik Morales, had been asking him for the right hand throughout the fight.

"My corner was asking for that big right hand. They saw it coming," Vargas said. "They must have. It was my mistake. I thought I was controlling with the jab. Every time he stepped in with the jab, I would catch him perfectly and hurt him and buzz him. He would catch me now and then with a few jabs, but they weren't doing anything to me. They weren't as strong as my jabs."

Both fighters talked up a rematch. Vargas said he would pick up where this one ended.

"We start off where we left off in that last round -- throw off more punches and keep more active," Vargas said.

Said Bradley, "Why not? Why not? We can do a rematch. Hey, I don't have a problem with that. We can definitely do a rematch, man. Jessie came out and fought hard.

"I felt like I was in better shape than he was, that's why I was taking over the fight in the second half. I came on strong with my jab and landed combinations. But absolutely, I can give him a rematch. No problem." 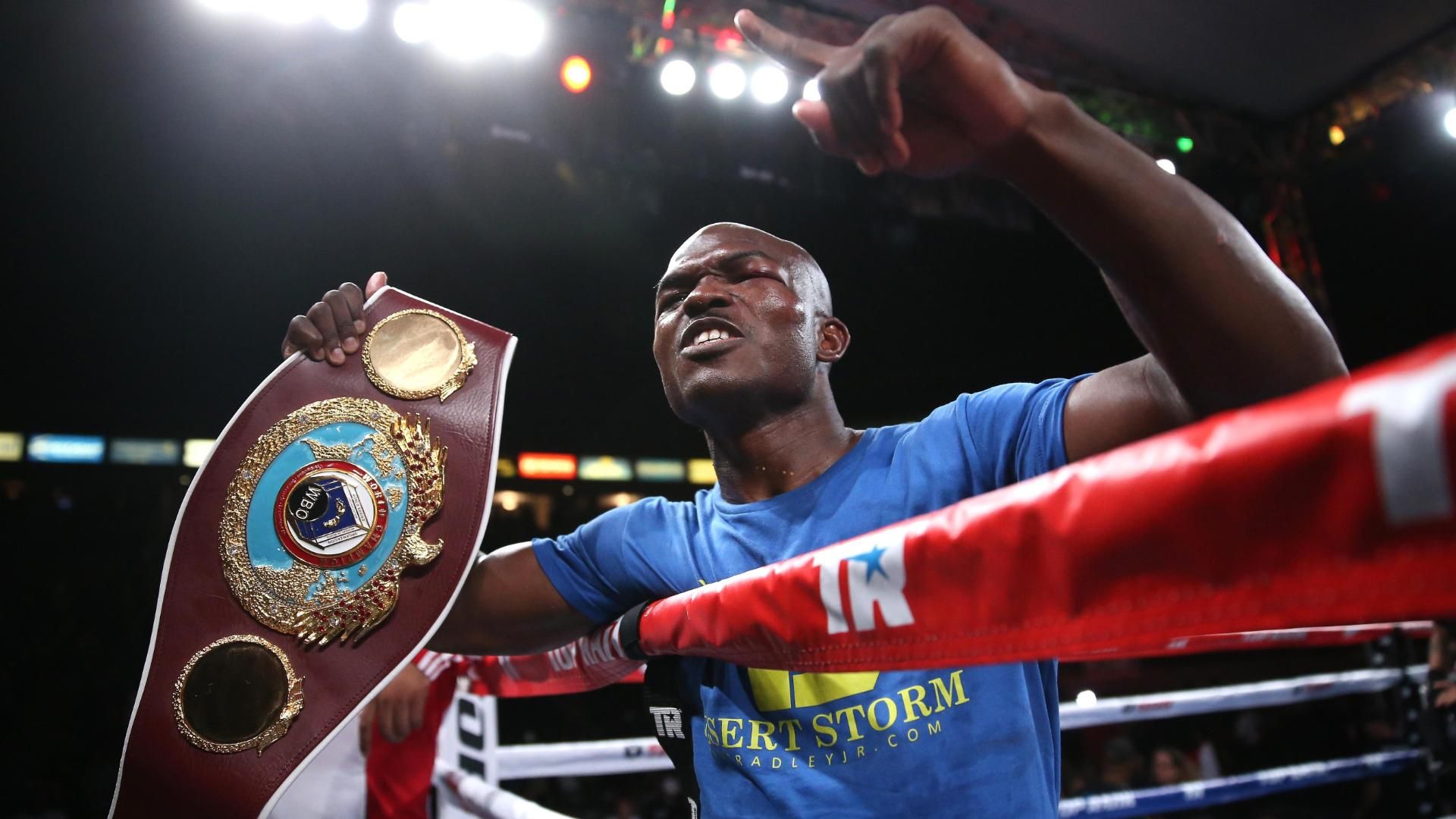