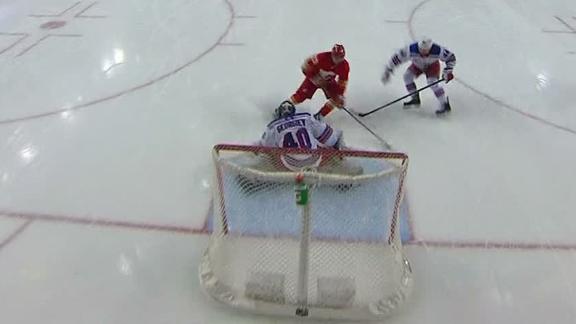 ESPN
CALGARY, Alberta -- Matthew Tkachuk's playmaking skills were on full display for the Flames. And, the New York Rangers suffered the consequences.

Tkachuk scored two goals -- his 31st and 32nd of the season -- and had a career-high five points to lead Calgary to a 5-1 victory Friday night.

"Obviously when I have the puck on my stick and guys are going to the net, I want to make plays," said Tkachuk, who was also a plus-five. "I don't think of myself as a shooter or a passer, I'm just somebody trying to read the play and make the best play possible."

Johnny Gaudreau, Garnet Hathaway and Michael Frolik also scored for Calgary, which moved one point ahead of the San Jose Sharks for the Pacific Division lead with 11 games to go.

Tkachuk had 10 points (six goals, four assists) on the Flames' 3-0-0 homestand. The hot streak comes after an extended cold stretch during which he had just six points in the previous 18 games.

"He makes subtle, little smart plays, plays off the wall, plays where he protects it and uses his body to protect the puck, he's smart," Flames coach Bill Peters said. "Just a real smart and instinctive player, but a lot of it is just the way he goes about the game. He's a student of the game and he looks to get better each and every time he goes on the ice."

Neal Pionk scored for the New York, which is winless in its last six on the road.

They were moving the puck around smart," Rangers defenseman Marc Staal said. "They had some guys that were making some really nice plays and we just didn't have an answer for it. It's hard in those situations to not let it snowball. I thought we got down and couldn't get anything going after that."

Tied at 1 after 20 minutes, Tkachuk gave the Flames the lead for good 2:56 into the second when he deflected Mark Giordano's point shot past Alexandar Georgiev.

Just over a minute later, Tkachuk earned his 100th career assist, setting up Hathaway in front to make it 3-1.

It was all the offensive support needed by David Rittich, who turned aside 24 shots to improve to 25-7-5.

Gaudreau opened the scoring 10 minutes into the first period on a beautiful pass by Tkachuk. Looking more like a football quarterback, Tkachuk lobbed a 95-foot pass from deep in his own end that landed on the stick of Gaudreau, springing him on a breakaway. Coming off a three-goal, six-point night on Tuesday, Gaudreau remained hot, making a nice move before slipping the puck through Georgiev's pads for his team-leading 34th goal.

"I saw Johnny flying and I saw the (defense) and they weren't looking at me, so if I threw it up in the air, it's not like he can turn around, catch it and come back," Tkachuk said. So I just thought, it's better that (I) rip it hard and see if it goes past him. It was such a fortunate bounce, it just landed and stopped. Johnny went in and made an unbelievable move."

The Rangers tied it 70 seconds later when Ryan Strome found Pionk coming late and the defenseman wired a slap shot inside the post.

The Flames put the game away in the third period. Tkachuk's third primary assist, as he set up Frolik in front, made it 4-1 at 5:12. He rounded out the scoring by converting Mikael Backlund's pass at 9:49.

"We've been a team that has played hard, but big deal," Rangers coach David Quinn said. "You should play hard in the National Hockey League. You're a professional athlete. You shouldn't get patted on the back because you played hard. It should be expected. We didn't play hard tonight. We certainly didn't play smart tonight."

Rangers: wrap up their four-game road trip in Minnesota on Saturday night.

Flames: at Winnipeg on Saturday night.