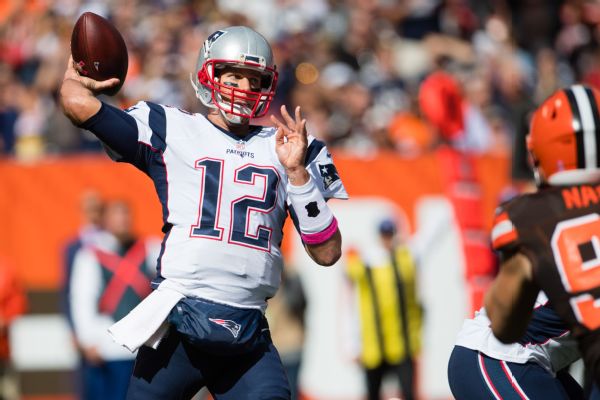 CLEVELAND -- Quarterback Tom Brady is back and it didn't take him long to lead the New England Patriots into the end zone. Twice.

Brady was 4-of-5 for 65 yards as the Patriots scored on their opening possession of Sunday's game against the Cleveland Browns at FirstEnergy Stadium. The drive ended with running back LeGarrette Blount scoring on a 1-yard run off the left side as Brady celebrated with teammates.

Brady opened the drive by connecting with one of his go-to targets, receiver Julian Edelman, for a 10-yard gain along the right sideline. Then he found tight end Rob Gronkowski over the middle for 19 yards on the next play, as the Patriots' aerial attack got off to a quick start.

A key play on the drive came on third-and-8 from the Cleveland 36 when Brady found Gronkowski for a 34-yard catch-and-run. Gronkowski, who has been limited with a hamstring injury, looked like he was getting back to top form as he rumbled up the right sideline.

Brady also led the Patriots on a touchdown drive on the second march -- a 7-yarder to tight end Martellus Bennett to cap off an eight-play, 75-yard drive. Parts of FirstEnergy Stadium broke out in a "Brady! Brady! Brady!" chant, as there is a large contingent of Patriots fans on hand.