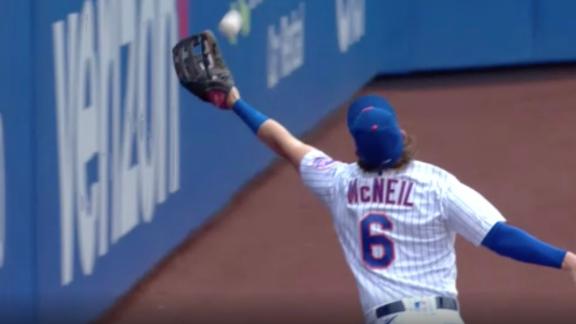 NEW YORK -- Tomas Nido had his first two-homer game as a professional, hitting a two-run shot in the fourth inning and a grand slam in the fifth to lead the New York Mets to an 8-2 win over the Washington Nationals and a split of the four-game series.

Nido, who entered Thursday with five homers and 26 RBI over 93 games in parts of four big league seasons, is just the fifth catcher in Mets history to hit at least two homers and collect at least six RBI in a game. Hall of Famers Gary Carter and Mike Piazza did it twice apiece and Todd Hundley and Paul Lo Duca once each.


Nido struck out in the seventh as he tried to match Carter, the only Mets catcher with a three-homer game.

"Hard work pays off," Nido said. "I did work really hard this offseason and it just feels good to be able to help the team win."

Dominic Smith homered in the second and Pete Alonso had an RBI single in the eighth for the Mets, who were relieved to learn their second straight victory wasn't as costly it first appeared it could have been.

Left fielder Jeff McNeil was carted off after crashing into the wall while robbing Asdrubal Cabrera of a two-run extra-base hit to end the first inning. Manager Luis Rojas said afterward that X-rays and an MRI on McNeil's left knee were negative and that the All-Star is day-to-day with a bone bruise.

"When I got out there with the trainer, we were a little concerned just how he was talking to us," Rojas said of McNeil, who covered his eyes with his hands after he fell and flung his glove.

McNeil's catch cost the Nationals the chance to put up a crooked number against rookie David Peterson (3-1), who allowed Washington to load the bases with no outs. Trea Turner walked and went to third when Nido fielded Adam Eaton's bunt and threw the ball into center field. Starlin Castro walked before Peterson struck out hot-hitting Juan Soto and retired Howie Kendrick on a run-scoring comebacker to bring up Cabrera.

Peterson allowed only the unearned run over five innings and gave up just one hit -- Yan Gomes' single leading off the fifth. The rookie southpaw walked two, struck out three and retired 11 of 12 before Gomes' hit. Peterson was lifted after 74 pitches due to some routine shoulder soreness, but said he wasn't concerned.

Soto capped a sensational series by homering in the sixth. He was 7 for 15 with four homers and eight RBI in the four-game set.


Austin Voth (0-2) took the loss after allowing three runs while throwing 86 pitches over four innings. He has thrown five innings or fewer in all three starts this season.

"Eighty-seven pitches in four innings -- that's a lot," Nationals manager Dave Martinez said. "We've got to get him through five or six innings."

Mets leadoff batter Brandon Nimmo doubled in the first inning to extend his on-base streak to a career-high 34 games. It's tied for the third-longest streak in team history with Alonso (2019) and Carlos Delgado (2007-08). ... Michael Conforto walked in the third and has reached base in a career-high 21 straight games dating to the 2019 season finale.

HELLO, I MUST BE GOING

Nationals RHP Stephen Strasburg, scheduled to start Friday despite still dealing with a nerve issue in his right hand, was ejected from the stands for arguing balls and strikes in the third inning.

Strasburg, sitting in Section 121 at Citi Field in this socially distant season, was apparently unhappy with the strike zone of home plate umpire Carlos Torres after Voth's 2-2 pitch to Alonso on the outside corner was ruled a ball.

Moments later, Torres ejected Strasburg, though it took a few seconds to realize who had been tossed. Someone was heard yelling, "You're (expletive) brutal" shortly before television cameras captured Strasburg doffing his cap as he walked up the staircase on his way out of the park.

"I thought the umpire threw me out of the game, so I was kind of heated up," Martinez said. "(Strasburg) got thrown out as a fan. I love Stephen. I can't tell you what he said, but I love him."


The usually stoic Strasburg appeared to be grinning underneath his blue mask as he made his exit.

Mets: SS Amed Rosario (stomach) missed his third straight game. ... 2B Robinson Cano (left groin) played another simulated game Wednesday, but couldn't work out on the field before Thursday's game because the tarp was on in anticipation of morning rains. The Mets are hopeful he can return when eligible Friday.

Nationals: In a flurry of pregame moves involving relievers, Washington put LHPs Sean Doolittle (right knee fatigue) and Sam Freeman (left flexor mass strain) on the 10-day injured list, reinstated RHP Will Harris (groin) from the IL and selected the contract of LHP Seth Romero, their first-round pick in the 2017 draft who missed all of last year after having Tommy John reconstructive elbow surgery in August 2018. Romero made his big league debut Thursday and gave up four runs in 1 2/3 innings. Freeman, injured while pitching Wednesday night, and Doolittle, 0-1 with a 15.00 ERA in five appearances this year, were the only two lefties in Washington's bullpen. ... CF Victor Robles was out of the starting lineup, a day after getting hit by a pitch on a knuckle on his right hand. "Just being very cautious," Martinez said. Michael A. Taylor started in Robles' spot. ... LHP Roenis Elias has been shut down after feeling his forearm tighten, Martinez said. Elias is on the 60-day IL because of a left elbow flexor strain.

Mets: Jacob deGrom (2-0, 2.45 ERA) will look to win his third straight start when the Mets begin a road trip at Philadelphia.

Nationals: Strasburg (0-0, 10.38 ERA) is scheduled to start as the first road trip of the season continues in Baltimore with an unusual setup Friday. First, the clubs will complete a game suspended because the grounds crew couldn't unfurl the tarp properly when it rained in the top of the sixth inning Sunday with the Orioles leading 5-2 at Washington -- so the Nationals will be the "home" team for the resumption Friday -- and then they'll play the day's originally scheduled game.

McNeil crashes into outfield wall to make catch
Jeff McNeil sacrifices his body to make a catch in the outfield as he sprints back and collides with the outfield wall. He had to be carted off.
Report a correction or typo
Related topics:
sportsespnmlbnew york metswashington nationals
Copyright © 2020 ESPN Internet Ventures. All rights reserved.
More Videos
From CNN Newsource affiliates
TOP STORIES