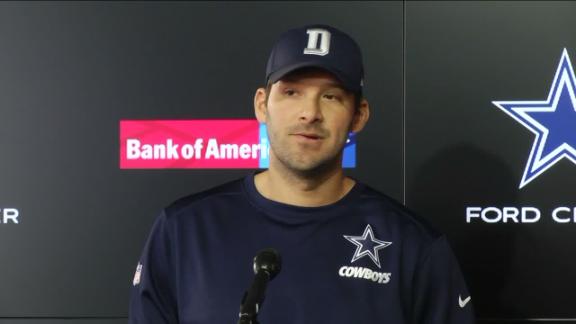 FRISCO, Texas -- For nearly five minutes, an emotional Tony Romo addressed his past, present and future as Dallas Cowboys quarterback almost three months after suffering a compression fracture in his back that has kept him out of the first nine games of the regular season.

Romo read a prepared statement that lasted just under five minutes, and did not take any questions.

Romo accepted that he will be Dak Prescott's backup when he returns this week against the Baltimore Ravens.

"He's earned the right to be our quarterback," Romo said. "As hard as that is for me to say, he's earned that right. He's guided our team to an 8-1 record and that's hard to do. If you think for a second that I don't want to be out there, then you've probably never felt the pure ecstasy of competing and winning. That hasn't left me. In fact it may burn more now than ever."

Romo entered 2016 feeling as good about his game as he has ever felt. He was able to go through an entire offseason program and training camp without any issues from a back that required two surgeries in 2013. The twice-broken left collarbone that forced him to miss 12 games last year was surgically repaired in the offseason.

Then on the third play of the Aug. 25 preseason game against the Seattle Seahawks, Romo suffered a compression fracture of his L1 vertebra when hit from behind by defensive end Cliff Avril. He attempted to re-enter the game but was held out. After the contest he expressed confidence that his back was able to withstand such a hit. On the next day he was diagnosed with the fracture.

"To say the first half of the season has been emotional would be a huge understatement," Romo said. "Getting hurt when you feel like you have the best team you've ever had was a soul-crushing moment for me. Then to learn it's not three of our weeks but 10 is another blow. And through it all you have a tremendous amount of guilt on having let your teammates, fans and organization down. After all they were depending on you to bring them a championship. That's what quarterbacks are supposed to do. That's how we're judged. I love that. I still do."

In his 14th year and 36 years old, Romo knows he does not have many chances left to compete for a championship.

He said he has felt like an "outsider," as the Cowboys have put together the best record in the NFL while he rehabbed. Last week marked the first time he went through three straight full practices since late in the 2014 season. After Sunday's win against the Pittsburgh Steelers, owner and general manager Jerry Jones said the Cowboys would go with Prescott's hot hand.

"It's a dark place, probably the darkest it's ever been," Romo said. "You're sad and down and out and you ask yourself, 'Why did this have to happen?' It's in this moment you find out who you really are and what you're really about."

Romo also knows the business of the NFL. In 2006, he did what Prescott is doing. Bill Parcells went to him over Drew Bledsoe after six games and he spurred the Cowboys on to the playoffs. He has been the Cowboys' starting quarterback ever since, becoming the franchise leader in touchdown passes and yards while compiling a 78-49 record.

"It's not always easy to watch," Romo said. "I think anybody who's been in this position understands that. But what is clear is that I was that kid once, stepping in, having to prove yourself. I remember the feeling like it was yesterday. It really is an incredible time in your life. And if I remember one thing from back then, it's the people that helped me along when I was young.

"And if I can be that to Dak, you know, I've tried to be and I will be going forward. We all know something magical is happening to our team. I'm not going to allow this situation to negatively affect Dak or this football team by becoming a constant distraction. I think Dak knows that I have his back. And I think I know that he has mine. Ultimately, it's about the team. It's what we've preached our entire lives."