Tony Stewart back in sprint car 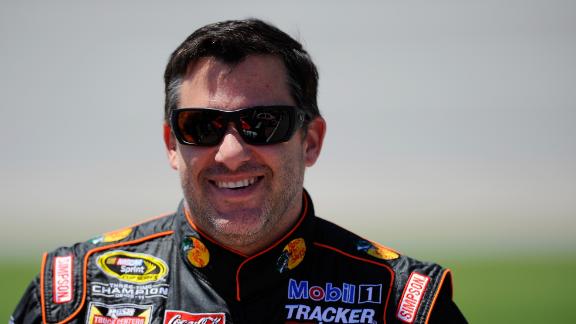 Tony Stewart has driven a sprint car again, roughly 10 months after the accident that sidelined the three-time NASCAR champion with a broken leg.

Stewart posted several pictures to his new Twitter account of a car he drove Monday. It's not clear where the test session occurred.

Guess who got back in a sprint car for the first time today :) #smokewillrise pic.twitter.com/HBWg4dno8q

- Tony Stewart (@TonyStewart) May 27, 2014Stewart broke his right leg in a crash in a sprint car race in Iowa in August that sidelined him until February preparations for NASCAR's season-opening Daytona 500.

He said on Twitter that driving the car again "was a huge day for me." In a reply to a fan, he acknowledged that he indeed had butterflies, "but it felt like an old pair of shoes."

Stewart also posted that the car had safety improvements to the torque tube to prevent an injury like the one he suffered.

Stewart Back In The Saddle, Drives Sprint Car
John Oreovicz discusses the significance of Tony Stewart getting behind the wheel of a sprint car following the accident 10 months ago which resulted in a broken leg.
Related topics:
sportsespnnascartony stewartsprint cupsprintautoracing
Copyright © 2021 ESPN Internet Ventures. All rights reserved.
More Videos
From CNN Newsource affiliates
TOP STORIES