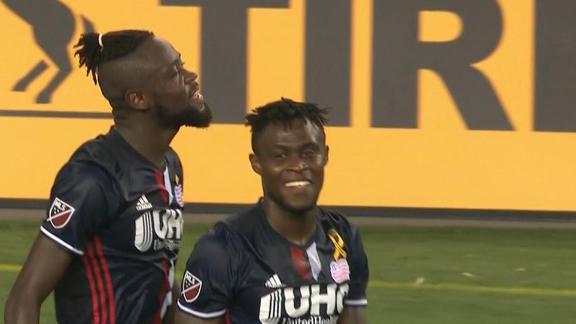 Toronto FC missed a chance to secure the MLS Supporters' Shield on Saturday, falling 2-1 to the New England Revolution.

Needing a victory to claim the trophy for best regular-season record for the first time in club history, Toronto quickly answered New England's 82nd-minute opener, only for Kei Kamara to net the winner in the 87th.

With Toronto again resting stars Sebastian Giovinco and Jozy Altidore, it was largely a drab affair until Lee Nguyen found the breakthrough with a deflected shot for his 10th goal of the season and 50th of his career for the Revs.

Toronto hit back almost immediately as Nicolas Hasler volleyedMichael Bradley's ball into the box, but Kamara rose highest to head homeNguyen's cross to win it.

On 62 points with three games left, Toronto can not afford another loss in its quest to finish with the all-time best MLS points record of 68, set by the Galaxy in 1998.

After not scoring all season, Patrick Mullins netted all four goals as D.C. United won 4-0 to damage the San Jose Earthquakes' playoff hopes.

After a goalless first half, the former Hermann Trophy winner redirected Paul Arriola's cross for the opener in the 57th minute.

Three minutes later, Mullins turned in another Arriola cross, this time with his head, and he completed his hat trick in the 68th minute after San Jose keeper Andrew Tarbell could only parry Zoltan Stieber's free kick into his path.

With two minutes to play, Mullins stepped up to a free kick on the edge of the box to deliver his fourth.Mullins is the ninth different player to score four goals in an MLS game, but he did it in the fastest span of just 31 minutes.

The Earthquakes are fifth in the Western Conference but level on points with Houston and just a point ahead of Real Salt Lake and FC Dallas. D.C. is still bottom of the East table.

Playing in an unusual home game in Connecticut, New York City FC managed a 1-1 draw with the Houston Dynamo.

The game was moved to Rentschler Field in East Hartford because NYCFC's regular home of Yankee Stadium is needed for a rescheduled baseball game on Monday.

Despite the diminished crowd, NYCFC took the lead in the sixth minute when Maxi Moralez beat his marker to a header. Butin the 18th minute, Vicente Sanchez caught NYCFC offguard with a quickly taken free kick to play in Mauro Manatos for the equalizer.

MLS Golden Boot leader David Villa left the game with an apparent injury in the 84th minute. NYCFC can clinch a playoff spot on Sunday if the Montreal Impact lose away to Atlanta United.

Pontius scored from a diving header to put the hosts ahead in the 10th minute, then pounced on a loose rebound in the 56th minute.

CJ Sapong made it 3-0 soon afterward by turning in a cross at the near post, andLuis Solignac's consolation goal for Chicago could not spark a comeback.

The Fire are in third place in the East but failed to capitalize on NYCFC's draw and remain four points out of the top two spots and a first-round bye.

Jonathan Mensah headed Columbus in front following a set piece in the sixth minute, but New York equalized eight minutes later as Bradley Wright-Phillips took a touch in the box before firing home.

It stayed level into the second half, when Justin Meram curled in a shot from the left of the goal to restore the Crew's lead, which was soon doubled through a header from Josh Williams following a corner.

Gonzalo Veron got a goal back for New York after drawing a penalty -- only given after a video review -- and scoring from the spot.

Columbus moved into fourth place in the East, just a point behind Chicago, while New York stayed in the final playoff spot in sixth.

Dallas' winless streak stretched to 10 games, dating back to its last victory on July 22, and the club is now a point outside the playoff places in the West.

Tesho Akindele actually had Dallas ahead in the 14th minute, but Christian Ramirez equalized 10 minutes later on the counter-attack.

Miguel Ibarra then put the Loons ahead by volleying home from Ramirez's high lobbed pass into the box. Ramirez also set up Ethan Finlay to score in the second half.

Akindele was sent off in the 81st minute, and Minnesota took advantage to add a fourth through Abu Danladi.

Jefferson Savarino and Luke Mulholland scored in the second half and Real Salt Lake brought the Seattle Sounders' 13-game unbeaten streak to an end with a 2-0 win.

Savarino opened the scoring in the 52nd minute, finishing Albert Rusnak's cross into the far corner from the right side of the box.

Mulholland smashed home Savarino's wide cross with a short-hop volley in the 66th.

The Sounders, despite coming into the match with the club's longest unbeaten streak, had also been winless since Aug. 20 and extended their slide to five games.

Yordy Reyna had a goal and an assist to help the Vancouver Whitecaps beat the Colorado Rapids 2-1.

Fredy Montero also had a goal and an assist for Vancouver, which moved four points clear atop the Western Conference table and stretched its unbeaten streak to seven games.

Dominique Badji scored for last-place Colorado, who have just seven this season.

After the Rapids got the tying goal just before halftime on a sloppy sequence that will disappoint Vancouver head coach Carl Robinson, Montero chipped a pass over the top and into Reyna's path in the 54th minute.

The Peruvian left Rapids defender Axel Sjoberg in his wake and beat goalkeeper Tim Howard, who was slow to react off his line, to the loose ball before burying his fifth goal in just 14 games.

Reyna missed the first half of the season with a broken foot, but now has three goals in Vancouver's last four games.

DC United 4-0 Earthquakes: Mullins nets all four
Patrick Mullins had a night to remember as he scored all four goals for DC United to down San Jose at RFK Stadium.

NYCFC 1-1 Houston: Honors even in CT
Two-first half goals ensured a share of the spoils for NYCFC and the Dynamo amidst the heat at Rentschler Field.

Philadelphia 3-1 Chicago: Pontius bags brace
Chris Pontius netted a double to lead his Union side to a 3-1 home victory over Chicago.

Columbus 3-2 Red Bulls: Crew hang on
Columbus were able to hold off New York's late push for a comeback to seal all three points in a home victory. 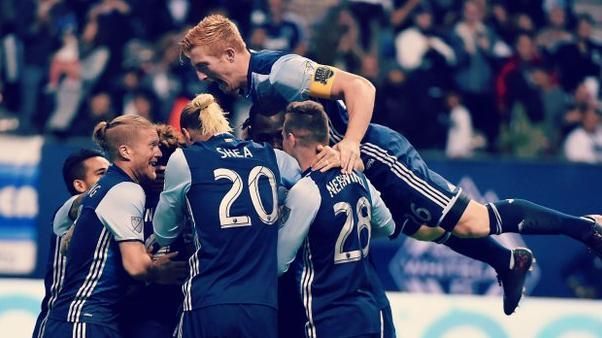