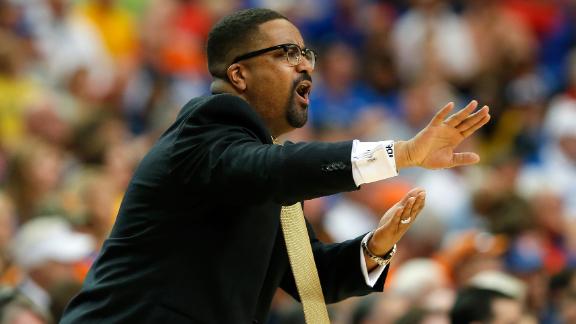 TULSA, Okla. -- Tulsa hired Frank Haith away from Missouri on Friday, landing a major-conference coach to lead the Golden Hurricane's transition from Conference USA to the American Athletic Conference this summer.

The 48-year-old Haith said the move came quickly: He was contacted Thursday and was particularly interested by Tulsa's upcoming move to the home of national champion UConn as well as to teams like Memphis and Cincinnati.

"It's truly a blessing," Haith said. "There's no question that Tulsa's move into the American Athletic Conference was a big part of making the decision to come here. The strength of this league is phenomenal. It's a basketball league."

Haith was 76-28 at Missouri, which plays in the SEC. He replaces Danny Manning, who left for Wake Forest after two seasons in Tulsa.

University president Steadman Upham pointed to Haith's career record (205-129 over 10 years at Miami and Missouri, including eight postseason trips) and his experience leading transitions as major factors in the hire. Missouri left the Big 12 for the SEC in 2012, and Miami moved from the Big East to the ACC in 2004.

"We talked to many head coaches, we had serious conversations with some, but there was only one coach that met all of these criteria," Upham said.

Haith was suspended for the first five games of this past season by the NCAA after it was found that he inadequately monitored his former assistants' interactions with disgraced Miami booster Nevin Shapiro and then tried to cover up a five-figure hush money payment to keep potential violations hidden.

The Committee on Infractions' report also found that Haith provided inconsistent answers during multiple interviews with investigators, including conflicting accounts of when he reported the shakedown attempt by Shapiro to Miami athletic director Paul Dee.

Haith has said he "strongly" disagreed with the report but did not appeal the findings. He told reporters he planned to donate 18 days' worth of his salary from his suspension to the Boys and Girls Club of Columbia. His base annual salary was $450,000, though he earned a guaranteed $1.6 million each year with the Tigers.

As successful as he was at Missouri, Haith was plagued by postseason stumbles, as the second-seeded Tigers lost in the NCAA tournament's first round to 15th-seeded Norfolk State following a 30-5 season in 2011-12. They lost again in the first round in 2013. This past season, Mizzou went 7-8 down the stretch and failed to qualify for the tournament.

Haith had only positive things to say about Missouri, and athletic director Mike Alden in particular.

"During my time there, he was absolutely incredible to me," Haith said. "I want to thank the student-athletes at Missouri. That was the toughest thing for me, to leave those young men. I did have a chance to visit with the guys before I got on the plane yesterday, and I talked about the decisions I had to make. I thought it was important to let them know it was really tough for me to leave Missouri."

"Everyone was just shocked, everyone doesn't really know what to expect," he said. "This is the last thing I thought would happen today, I mean I was expecting some assistant coaches maybe to leave, everyone has new opportunities. I just wasn't expecting that."

Alden said he granted Haith permission to talk with Tulsa and the coach indicated in a text message Friday that he was leaving. He said he was disappointed, but noted that Haith had left the program in better shape than it was three years ago.

"We are appreciative, very much so, of Frank and the job he did for Mizzou," Alden said. "I know that I was very pleased with the job Frank was doing. I know he had three years left on his contract. I know that it's important that we had a sense of urgency going forward."

Haith takes over a young Tulsa team that went 17-16, peaking toward the end of the season to win the Conference USA championship and earn an NCAA tournament berth.

"I think we've got a chance to have an outstanding ballclub, with a great nucleus, a lot of sophomores that are going to be juniors next year that were a big part of the success of this team," said Haith, who met with Golden Hurricane players late Thursday. "From a personnel standpoint, I like what I see. I was very impressed with their disposition, how they carried themselves, how they spoke, and it's exciting because I think they all really want to win, want to do things the right way."