'Turn off the lights': How the Yankees rallied to seize the AL East lead 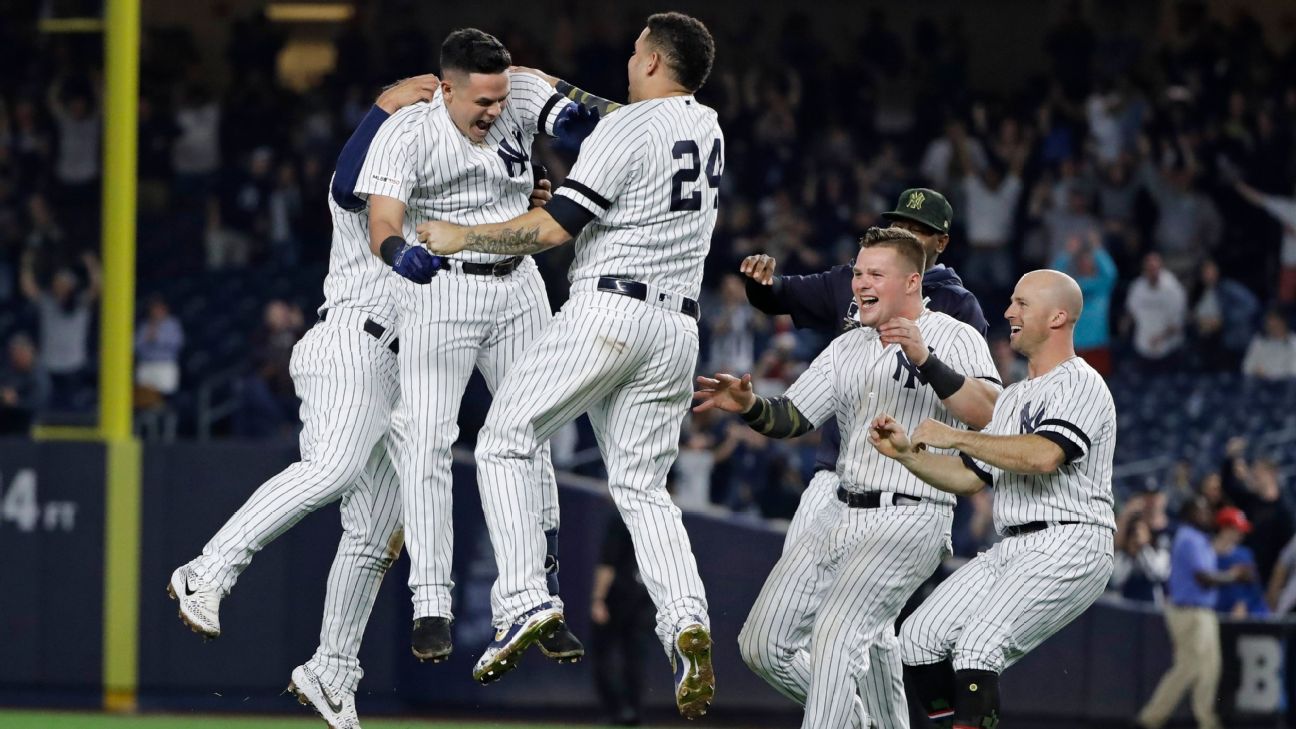 ESPN
By Coley Harvey
NEW YORK -- The game was tied, but CC Sabathia was telling his teammates they could start packing up their belongings; first place was about to be theirs.

"Turn off the lights," the New York Yankees' 19-year veteran bellowed as those inside the home dugout settled in for an at-bat they've become quite familiar seeing lately.

Sit tight, though. Before dissecting that pivotal three-pitch sequence that served as the finale in Friday night's Yankees-Rays opener, it's important to go back and look at the plays that led up to that moment -- and allowed the Bronx Bombers to alter the American League East standings, claiming the spot atop the division throne on "Game of Thrones" Night.

Friday's ninth, an inning the Yankees entered trailing 3-1, made that all possible.

Already swinging a hot bat in the game, having previously notched yet another multihit night, the Yankees' burly first baseman led off the bottom of the ninth by facing a flamethrower whose stuff has drawn its share of leaguewide respect.

"He's probably got some of the nastiest stuff in the big leagues," Voit said of Jose Alvarado, one of Tampa Bay's flame-throwing relievers. "I mean, it's 100-101, with some nasty sink, and he's got a slider that's 92."

What was Voit's game plan to combat such power pitching?

"[But] you know eventually he's going to make a mistake -- he's human."

It actually didn't take very long for that mistake to come. On the very first pitch Voit saw, he got a 99 mph sinker right down the middle of the plate that he wasted no time getting his hands to. Launching a 398-foot opposite-field shot, Voit closed the two-run deficit to make it 3-2.

In the process, he pumped renewed life into Yankee Stadium.

After Voit rounded the bases and the lights dimmed on his home run trot, catcher Gary Sanchez appeared on the scene, ready for his own battle with the flame-throwing Alvarado.

He, too, wasted little time connecting off the ninth inning's antagonist, driving a well-struck line drive deep into left field on a 1-1 count.

With one on and one out in a game his team trailed by a run, Yankees second baseman Gleyber Torres was focused on not giving in during an at-bat his manager considered "probably his best at-bat of the year."

Through it all, Torres delivered, smacking a double that one-hopped the left field wall to put a pair of runners in scoring position.

"That's a grind-it-out, lay off some pitches, spoil some tough pitches and [then] finally get one he can handle and smoked it," Boone said of Torres' at-bat.

It might have been the most crucial sequence of the night for the Yankees, who entered the game trailing the Rays by game in the AL East standings.

As crucial as it might have been, though, that wasn't the sequence that finally ended things. Those pitches came minutes later, and just seconds after Sabathia turned to his teammates and effectively told them to prepare to go home. He knew, like so many who have watched the Yankees closely of late, the Rays' champion with the filthy stuff was about to be slayed.

Sabathia knew that, because he was all too familiar with the young hero who was digging in to face the hard-throwing Alvarado.

Since his arrival in the Bronx on April 6, Urshela has been right at the center of several clutch Yankees moments; many of them have come in the last two weeks alone.

On May 7, Urshela hit a game-tying ninth-inning homer in a dramatic win over the Seattle Mariners. Two nights later, he came through with a timely two-RBI single that gave the Yankees needed insurance runs. The next night at Tampa Bay, he delivered a go-ahead two-RBI single in the sixth inning that proved to be the winning blow to open a heated series.

"Very fun for me, being there that last inning," Urshela said of embracing yet another game-changing moment Friday.

In realizing just how heroic Urshela has been in recent weeks, it's easy to understand why Sabathia and others were so confident he would get the job done in what became a tie game when a wild pitch brought a run home on the first pitch of Urshela's at-bat.

"We know we're up against a tough customer in Alvarado there, but guys expect it," Boone said. "And guys have been so good in the compete department, that I wasn't surprised they'd go down fighting."

Two quick balls from Alvarado, and Urshela was in the driver's seat.

"When it got 2-0, I knew he was going to get something to hit. There's no doubt in my mind," Voit said. "The kid has just been unbelievable, and every time there's a big situation, he just comes through."

He certainly did. Urshela blasted a liner coming off his bat at 109.7 mph -- the fourth ball in the inning hit 100 mph or harder -- deep into right-center field. Although Rays outfielder Kevin Kiermaier gave desperate chase to the fly ball, he couldn't quite corral it.

The ball went over his head. Game over. The Rays' month-and-a-half-long stay atop the division over.

Thanks to more late-inning magic from a player few Yankees fans had heard of a month ago, the still-banged-up Bronx Bombers were now in first. They doused their new late-game star with Gatorade in the middle of the field before heading inside for yet another fog-machine celebration in the clubhouse.

"Love the way we're competing day in and day out," Boone said. "We're at a point in the season where it's so long to go that you don't even get that caught up in the standings as much as everyone [else does], just put our best foot forward every day. And they've consistently been able to do that. They've consistently been able to deal with whatever's been thrown their way, and it's a team that comes in expecting to win."

With the team finishing games in such dramatic fashion, it may be safe to call the Yankees the best thing on television these days. 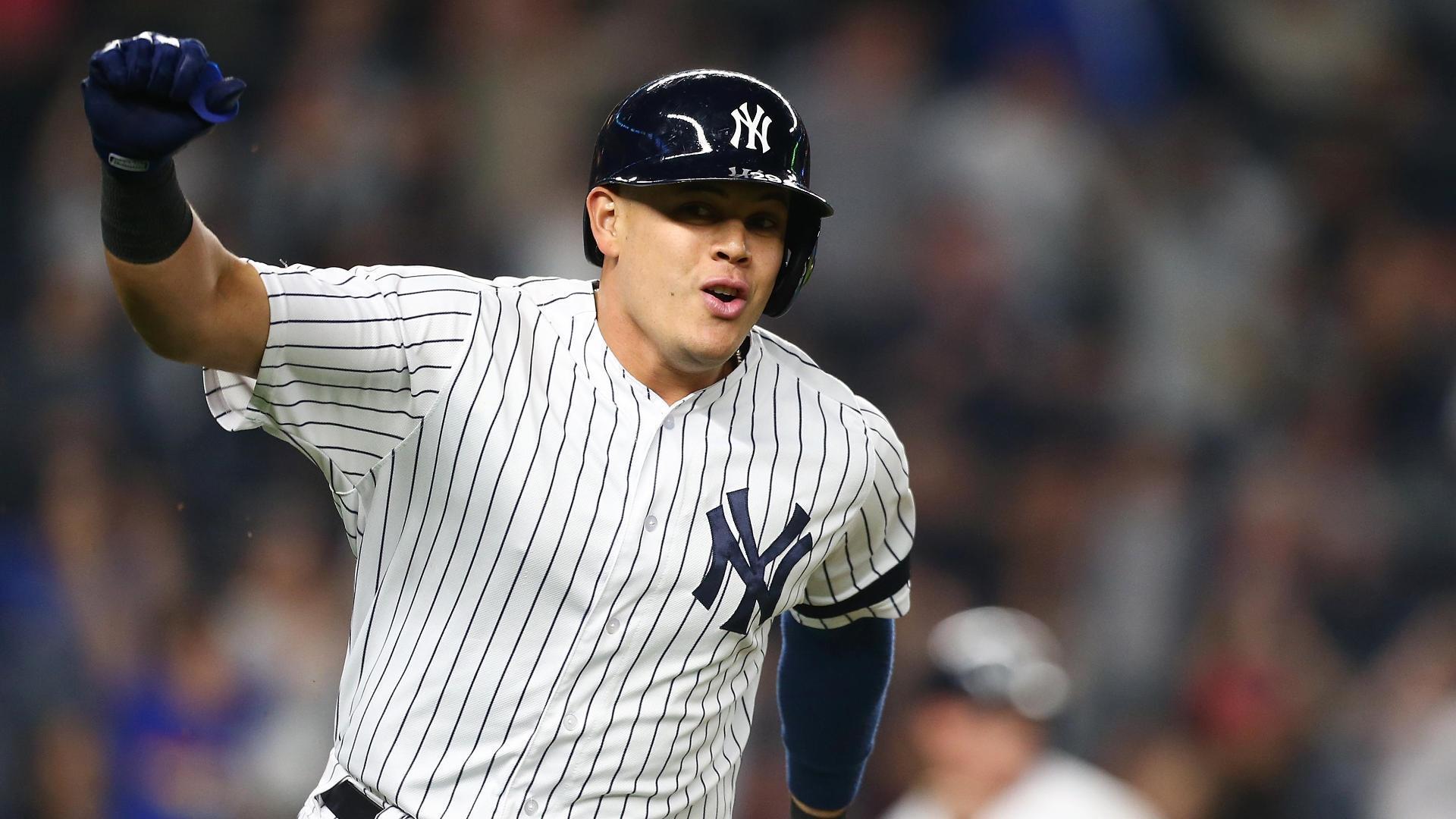 Yankees rally in the ninth for walk-off win
After a rain delay, the Yankees put together a three-run rally in the bottom of the ninth inning to come back and defeat the Rays 4-3.
Report a correction or typo
Related topics:
sportsespnmlbgio urshelanew york yankees
Copyright © 2020 ESPN Internet Ventures. All rights reserved.
More Videos
From CNN Newsource affiliates
TOP STORIES