Justin Turner returned to the diamond about an hour after the game.
AP
By STEPHEN HAWKINS
ARLINGTON, Texas -- No large dogpile, no champagne and a mask on nearly every face - the Los Angeles Dodgers celebrated their first World Series title since 1988 in a manner no one could have imagined prior to the coronavirus pandemic.

They started the party without Justin Turner, too, after their red-headed star received word of a positive COVID-19 test in the middle of their clinching victory.

Turner was removed from Los Angeles' 3-1 win over the Tampa Bay Rays in Game 6 on Tuesday night after registering Major League Baseball's first positive test in 59 days. He wasn't on the field initially as the Dodgers enjoyed the spoils of a title earned during a most unusual season.

"After the completion of the game tonight, we were informed by MLB that Justin Turner received a positive COVID test and that's why he was removed from the game." pic.twitter.com/EOxcMlNs5R

He returned to the diamond about an hour after the game, hugging longtime teammate Clayton Kershaw and sitting front-and-center for a team photo next to manager Dave Roberts with his mask pulled down under his bushy beard. 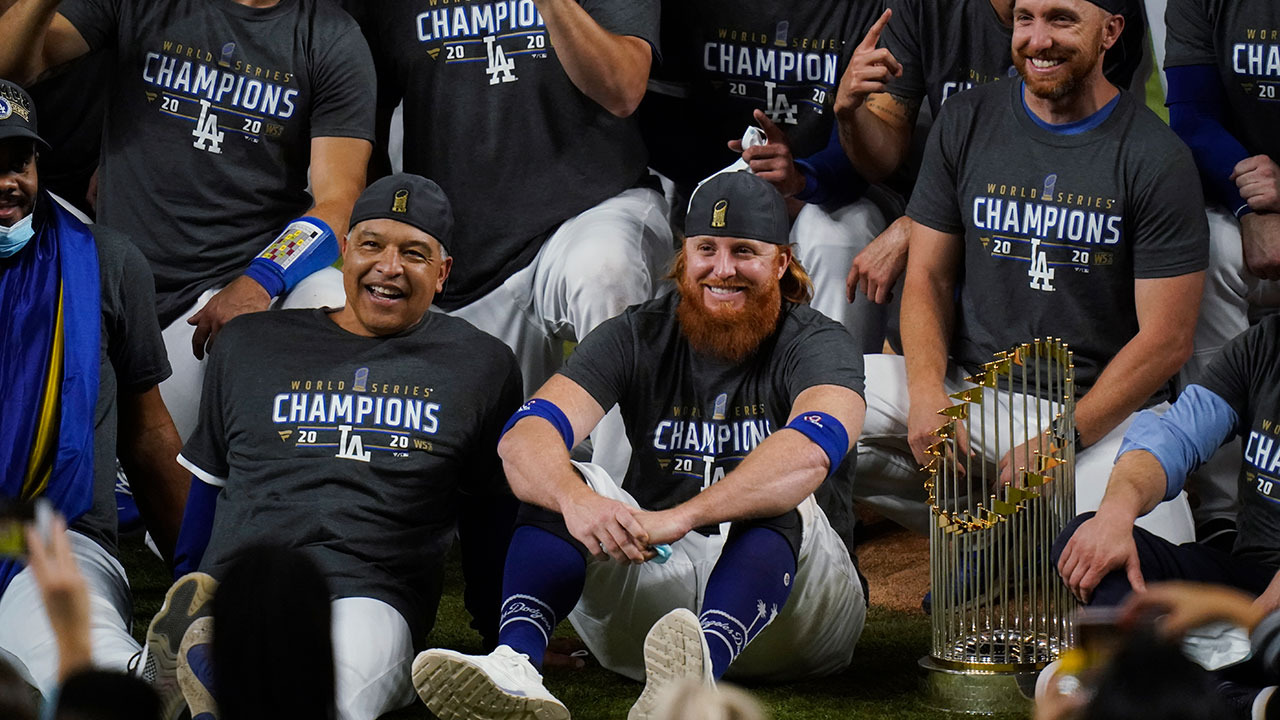 "Thanks to everyone reaching out!" Turner said on Twitter. "I feel great, no symptoms at all. Just experienced every emotion you can possibly imagine. Can't believe I couldn't be out there to celebrate with my guys! So proud of this team & unbelievably happy for the City of LA."

Thanks to everyone reaching out! I feel great, no symptoms at all. Just experienced every emotion you can possibly imagine. Can’t believe I couldn’t be out there to celebrate with my guys! So proud of this team & unbelievably happy for the City of LA#WorldSeriesChamps

"Immediately upon receiving notice from the laboratory of a positive test, protocols were triggered, leading to the removal of Justin Turner from last night's game. Turner was placed into isolation for the safety of those around him. However, following the Dodgers' victory, it is clear that Turner chose to disregard the agreed-upon joint protocols and the instructions he was given regarding the safety and protection of others. While a desire to celebrate is understandable, Turner's decision to leave isolation and enter the field was wrong and put everyone he came in contact with at risk. When MLB Security raised the matter of being on the field with Turner, he emphatically refused to comply.

The Commissioner's Office is beginning a full investigation into this matter and will consult with the Players Association within the parameters of the joint 2020 Operations Manual.

Last night, nasal swabs were conducted on the Dodgers' traveling party. Both the Rays and Dodgers were tested again today and their travel back to their home cities will be determined after being approved by the appropriate authorities."

MLB insulated postseason teams in neutral-site bubbles after traveling them across the country during a shortened 60-game season. Turner was the first player since the playoffs began to be flagged for the coronavirus.

They received Turner's Monday sample from the Sports Medicine Research and Testing Laboratory in Utah in the bottom of the second inning, when lab president Dr. Daniel Eichner called deputy commissioner Dan Halem, who was in New York, a person familiar with the call said, speaking to The Associated Press on condition of anonymity because details were not released.

Eichner told Halem the result was inconclusive. MLB receives many inconclusive results, so Halem told Eichner to run Tuesday's pregame sample from Turner. That result came back positive in the sixth inning, the person said.

"It was obviously a really unfortunate endpoint of this incredible series and definitely affected some of the joy of winning just because of what JT has meant to us," Friedman said.

When asked about what happened after the game, Friedman said Turner wanted to take a picture with the trophy. Friedman stated several times that those around Turner had previously been in close contact and said the team would take another round of tests before determining when to leave Texas.

The 35-year-old Turner has been a staple in the Dodgers' lineup for seven of their eight consecutive NL West titles. A late-blooming slugger who helped reshape the game by succeeding with an upper-cut swing, Turner is LA's career leader with 12 postseason home runs, including a pair in this Series, in which he hit .364 and also played stellar defense.

"It's gut-wrenching," World Series MVP Corey Seager said. "If I could switch places with him right now, I would. That's just not right."

"We're not excluding him from anything," teammate Mookie Betts said.

Commissioner Rob Manfred confirmed Turner's positive test moments after presenting the World Series trophy to Los Angeles - a jarring reminder of all that's been different in this season where the perennially favored Dodgers finally broke through.

The end of a frustrating championship drought for LA - and perhaps just the start for Betts and the Dodgers, whose seventh World Series title was their sixth since leaving Brooklyn for the West Coast in 1958.

"I had a crazy feeling that came to fruition," Roberts said. "It's just a special group of players, organization, all that we've kind of overcome."

Betts bolted from third for the go-ahead run on Seager's grounder in the sixth, even with the infield playing in, then had a punctuating homer leading off the eighth.

"It was absolutely phenomenal. This team was incredible," said Seager, also the NLCS MVP who set franchise records with his eight homers and 20 RBIs this postseason. "We were ready to go as soon as the bell was called. Once it did, we kept rolling."

Kershaw was warming in the bullpen when Julio Urías struck out Willy Adames to end it and ran alongside teammates to celebrate in the infield, later joined by family who had been in the bubble with them in North Texas.

The final out. #WorldSeries pic.twitter.com/d0rOut8iJN

Players were handed face masks as they gathered, although many of their embraces came mask-free even after Turner's positive test.

The Dodgers had played 5,014 regular-season games and were in their 114th postseason game since Orel Hershiser struck out Oakland's Tony Phillips for the final out of the World Series in 1988, the same year Kershaw - the three-time NL Cy Young Award winner who won Games 1 and 5 of this Series - was born in nearby Dallas.

"World Series Champs! They can't take that away!"@ClaytonKersh22 joins the show & describes what it's like to FINALLY win a World Series 🏆 pic.twitter.com/8F4keHQA2J

Los Angeles had come up short in the World Series twice in the previous three years. Betts was on the other side two years ago and homered in the clinching Game 5 for the Boston Red Sox, who before this season traded the 2018 AL MVP to the Dodgers. They later gave him a $365 million, 12-year deal that goes until he turns 40 in 2032.

"It was kind of like a sigh of relief," Betts said. "It was the Cy Young Snell that pitched tonight."

Snell struck out nine - including the first time all season that Betts, Seager and Turner each struck out in their first two at-bats. But the 2018 AL Cy Young Award winner didn't see the top three batters for the Dodgers again.

"The only motive was the lineup the Dodgers feature is as potent as any team in the league," Cash said. "Mookie coming around for the third time through, I value that. I totally respect and understand the questions that come with it. They're not easy decisions."

Randy Arozarena, the powerful Tampa Bay rookie, extended his postseason record with his 10th homer in the first off rookie right-hander Tony Gonsolin, the first of seven Dodgers pitchers. The Rays never got another runner past second base as LA's bullpen gave reliever-reliant Tampa Bay a taste of its own medicine while allowing only two hits and no walks over 7 1/3 innings.

About 2 1/2 weeks after the Lakers won the NBA title while finishing their season in the NBA bubble in Orlando, Florida, the Dodgers gave Los Angeles another championship.

The MLB season didn't start until late July and was abbreviated for the shortest regular season since 1878. The expanded postseason, with 16 teams making it instead of 10, ended when Urías got the last two outs on called third strikes, with catcher Austin Barnes stuffing the last pitch in his back pocket. The Rays had 16 Ks and the Dodgers 11, the most combined strikeouts in a nine-inning World Series game.

Chants of "M-V-P!, M-V-P!" broke out when Betts hit his double in the sixth off reliever Nick Anderson, who allowed runs in seven consecutive relief appearances, the longest streak in MLB postseason history.

Those chants got even louder - even with the a limited crowd of 11,437 - when Betts went deep on an 0-2 pitch by hard-throwing right-hander Pete Fairbanks.

MOOKIE OF THE YEAR. pic.twitter.com/J7P8MPfMUo

There were plenty of fans in Dodgers blue at the new $1.2 billion home of the Texas Rangers, the stadium with the retractable roof where they played 16 games over three weeks. And the roof was closed for the final one, with misty conditions and a game-time temperature of 39 degrees outside.

Los Angeles was home team for the final game of the season, like in the 2017 World Series when the Houston Astros won Game 7 at Dodger Stadium, and two years ago against the Red Sox.

"This year has been crazy, but no matter what, we'll look back on this and we're World Series champs. To get to say that and get to be part of that, it's so special no matter what," Kershaw said. "The only thing that may have made it better would be to be at Dodger Stadium." 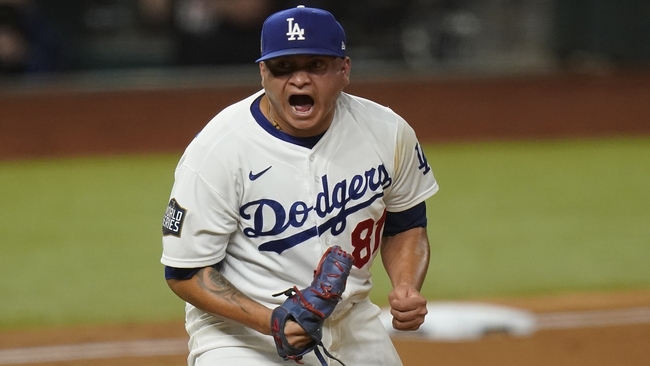 Free Taco Bell taco on Oct. 28 thanks to stolen base at World Series 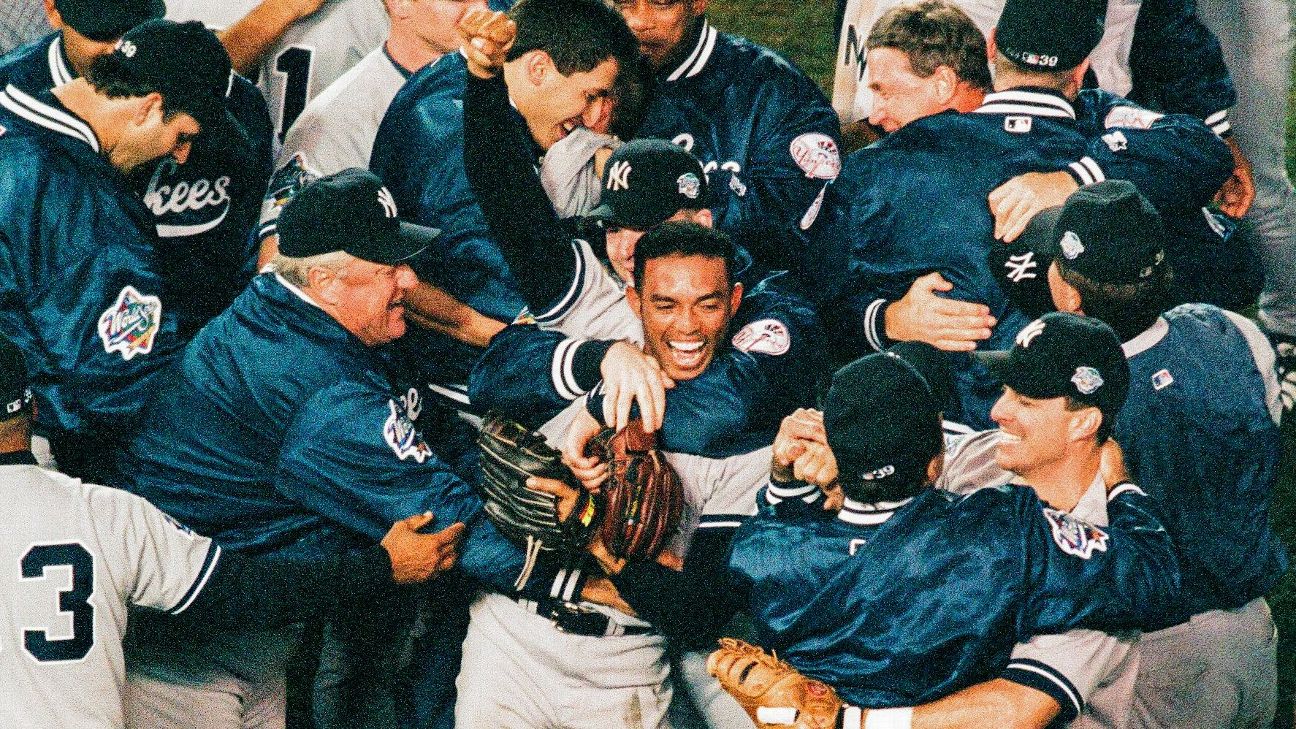 The Yankees, overshadowed? Why the 'best team ever' never got its due
More Videos
From CNN Newsource affiliates
TOP STORIES