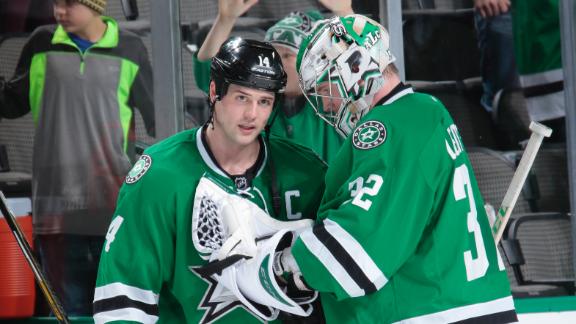 DALLAS -- The Stars likely will be without forward Tyler Seguin after he was injured Friday night on what coach Lindy Ruff called a "dirty shot."

Seguin, second in the NHL in points (59) and third in goals (29), was helped off the ice after being checked in the lower leg by defenseman Dmitry Kulikov in the third period of the Stars' 2-0 win over the Florida Panthers.

The circumstances of the injury to Seguin, the team's scoring leader, bothered the Stars.

"It's a dirty shot," Ruff said of the hit, on which Kulikov went low against the unsuspecting Seguin. "You end up taking your best player out. Not only out of the game, but he's taken him out of the lineup for a little bit. We'll let the league deal with it ... It's just a shot that didn't need to happen."

"(Seguin)'s released the puck, and he comes across and takes his knee out. It's a gutless play on his part, and we'll have to deal with that at a later time," Fiddler said.

"It was the right call. It was a five-minute [major] and game misconduct, so there's no issue," he said.

In addition, forward Ales Hemsky left in the first period with a lower-body injury.

Ruff was left with a grim injury report. None of the three injured players accompanied the team to Colorado for Saturday night's game.

"Eaves is on the way to get X-rays. He took a pretty good shot there to the head. He has had a previous injury there, so we're fairly concerned," Ruff said.