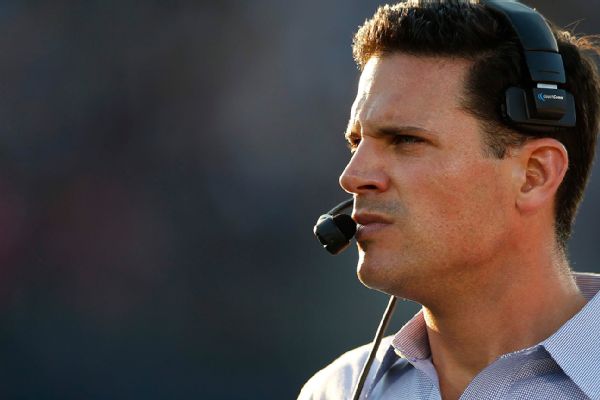 "I know this may come as a surprise to our fans and supporters given the timing of this decision," athletic director David Benedict said in a statement. "However, it became apparent to me that a change in program direction is necessary at this time."

Diaco was 11-26 in three seasons with the Huskies, who finished the season five weeks ago. In May, he agreed to a two-year contract extension through the 2020 season. He earned $1.7 million this season and was set to earn $1.8 million in 2017.

He will officially be relieved of his duties on Jan. 2 and will receive a buyout of $3.4 million, which would've been $5 million had he been fired effective Dec. 31 or earlier.

UConn went 3-9 this season and finished in a three-way tie for last place in the American Athletic Conference East division. Diaco demoted offensive coordinator Frank Verducci in early November, and UConn announced in late November that he would not return to the coaching staff. The Huskies ranked 122nd among the 128 Bowl Subdivision teams in total offense and last in scoring at 14.8 points per game.

According to ESPN Stats & Information, the Huskies averaged only 15.9 points per game during Diaco's tenure -- the fewest by an FBS team over a three-season stretch since New Mexico averaged 14.7 points from 2009 to 2011.

"This is obviously not the way I had hoped things would turn out, but I appreciate having had the opportunity to be here at UConn," Diaco said in a statement. "I thank the administration, staff and fans of the UConn football program for their passion and support over these three years. Most importantly, I want to say how much I love the players on this team and will be rooting for their success. I know that there are great things to come for all of them."

Penn State offensive coordinator Joe Moorhead is expected to be a candidate for UConn's vacancy. Moorhead will coach Penn State against USC on Jan. 2 in the Rose Bowl Game presented by Northwestern Mutual.

The Huskies have struggled since Randy Edsall, who led UConn to a bowl game in each of his final four seasons, left for Maryland after the 2010 season. Since then, UConn has had six straight seasons with at least seven losses -- with just 24 wins -- and has earned only one bowl invitation,a loss in the St. Petersburg Bowl last season.