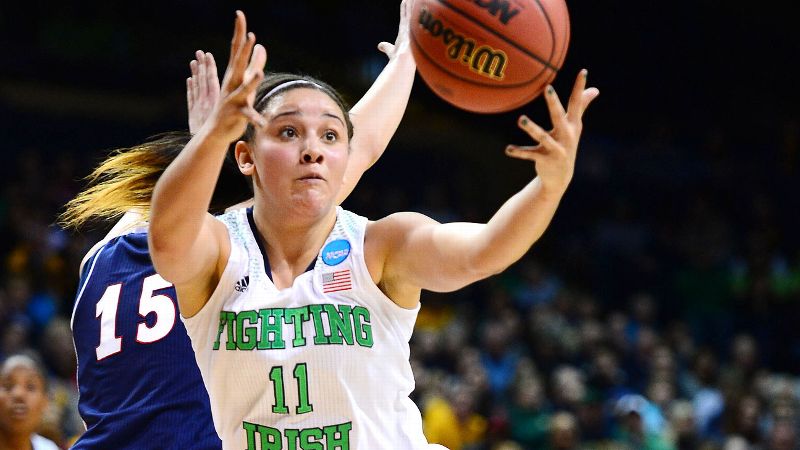 TOLEDO, Ohio -- Every now and then, Notre Dame coach Muffet McGraw will let her team practice without any fouls being called.

It's not easy for a team like the Fighting Irish to stay sharp when so many of their games turn quickly into routs, but top-seeded Notre Dame showed no sign of any real weakness Saturday in its NCAA tournament opener, beating 16th-seeded Robert Morris 93-42. The unbeaten Irish led 50-15 at halftime.

Michaela Mabrey scored 11 of her 16 points in the first half for Notre Dame (33-0), and Jewell Loyd and Natalie Achonwa finished with 15 each. The Irish are trying for their fourth straight Final Four appearance this year. They'll take on ninth-seeded Arizona State in the second round Monday.

"In the tournament, you can't take anyone lightly," said Ariel Braker, who had 10 points and eight rebounds. "Upsets happen all the time."

Maybe so, but the Irish will have to wait at least one more game -- and possibly longer -- for a significant challenge in this tournament.

Notre Dame won its previous two first-round games at the NCAA tournament by 31 and 33 points. The margin was wider than that at halftime of this one, with the Irish up by 35. Mabrey made back-to-back 3-pointers during a 25-4 run that made the score 32-8.

Robert Morris (21-12) shot 27 percent from the field. Greek star Artemis Spanou, one of the top players in Northeast Conference history, was held to seven points and attempted only four shots from the field.

After the game, coach Sal Buscaglia let loose with an emotional opening statement at his news conference, his voice choking up as he went on for about three minutes about his team.

"Notre Dame's great, and all these other people are great, but they do the same thing that they do. They work their tail off for me," Buscaglia said. "Just because we're not Notre Dame -- and they're great -- because we're Robert Morris doesn't mean that these young ladies don't do everything that they do. Everything they do! Did you ever go and work so hard for two-and-a-half hours, and then have to take an ice bath? Try it. That's what they do. That's what they do for me, and they do for their school."

Spanou became the third player in NEC history to earn player of the year honors in back-to-back seasons, but Notre Dame was ready for her. She played 39 minutes and finished with six rebounds and four assists. But she also turned the ball over eight times.

With less than a minute to play, she came out of the game and went down the line of coaches and teammates on the Robert Morris sideline, receiving hugs.

The Irish did not have any player exceed Mabrey's total of 23 minutes. She shot 6 of 7 from the field and made four 3-pointers.

The Irish outscored Robert Morris 50-8 in the paint.

Any hope Robert Morris had of keeping this game close was pretty much dashed by Notre Dame's outside shooting. The Irish, who came in shooting 34 percent from 3-point range, went 10 of 18 from beyond the arc.

Cable went 3 of 4 from long distance, part of an efficient overall performance for the heavy favorites. Loyd shot 7 of 11 from the field and had seven rebounds. Freshman Lindsay Allen had seven assists in 20 minutes.

"You never know with the first NCAA tournament, how the freshmen are going to respond," McGraw said. "Lindsay, she has that poise and that personality of just a steady demeanor the whole game."