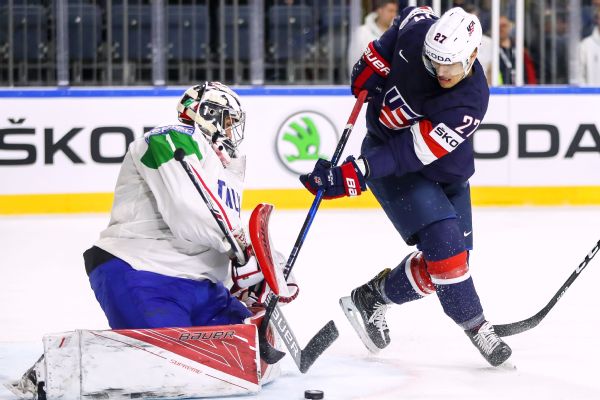 COLOGNE, Germany -- Brock Nelson scored twice as the United States cruised to its third win of the ice hockey world championship with a 3-0 defeat of Italy on Wednesday.

Nelson broke the deadlock with a wrist shot to the top right corner early on, then scored another in the second period, short-handed, minutes before Anders Lee completed the scoring on a power play. Dylan Larkin had two assists.

Jimmy Howard, who made 39 saves in a 4-3 win over Sweden on Monday, had a quieter game against the Italians, earning the shutout with nine saves. The U.S. had 32 shots in comparison.

"They're tough to play against," U.S head coach Jeff Blashill said. "Our guys kept with it and made enough plays to win the game, and that's the important thing."

Right wing Nelson of the New York Islanders was named player of the game.

The Americans, with an average age of just 22.6 years, moved second in Group A behind Latvia, also on nine points but having played a game less. The U.S. opened with a surprise 2-1 defeat to co-host Germany on Friday before ringing up a 7-2 rout of Denmark on Sunday.

Blashill's roster now has a two-day break before putting its three-game winning streak on the line against Latvia on Saturday.

Later Wednesday, Germany came from two goals down to defeat Slovakia 3-2, with Dominik Kahun scoring the only goal in a penalty shot shootout. Yasin Ehliz and Patrick Reimer had drawn the home side level with quick-fire goals in the second period.

Germany, without forward Patrick Hager due to his two-game suspension for a slew foot in Monday's 6-3 loss to Russia, moved to fourth in the group on five points to boost its quarterfinal hopes.

The top four from each eight-team group go through to the quarterfinals.

In Group B, goals from Reto Schappi, Andres Ambuhl and Cody Almond gave Switzerland a 3-0 win over Belarus in Paris, taking the Swiss level on nine points with leader Canada.

Canada, the two-time defending champion, was next playing co-host France on Thursday.

Belarus remained bottom of the group after four straight losses.

Finland gained a morale-boosting 5-2 win over Slovenia. Lauri Marjamaki's side had been under pressure after giving away a three-goal lead before losing 4-3 to the Czech Republic in a shootout and after its shocking 5-1 defeat to France. Wednesday's win lifted the side to third in Group B.
Related topics:
sportsespnworldschampionshipsnhlbrock nelsonolympic sportsteam usaunited statesice hockeyusiihfnew york islanders
Copyright © 2021 ESPN Internet Ventures. All rights reserved.
More Videos
From CNN Newsource affiliates
TOP STORIES