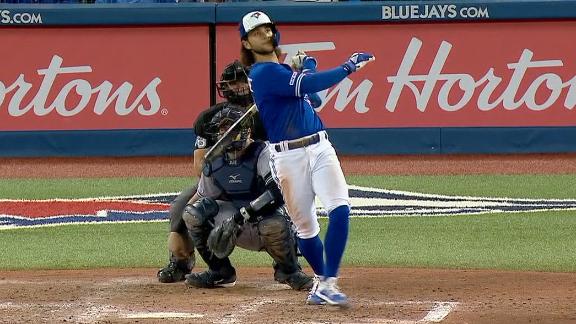 The Yankees have hit a record 19 homers over their last four games, including at least five in each win during a three-game sweep at Baltimore this week. Urshela hit two-run homers in the first and third innings, his 15th and 16th of the season, and outfielder Mike Tauchman also had a two-run shot during New York's six-run third.

Urshela's homer barrage comes almost exactly a year after the Yankees purchased him from the Blue Jays.

"They've been impact players for us," manager Aaron Boone said of Urshela and Tauchman. "They do it on both sides of the ball."

Playing at home for the first time, Bichette became the first player in major league history to double in nine consecutive games. He also homered, giving him an unprecedented 13 extra-base hits in his first 11 career games. Bichette is the first rookie to have an extra-base hit in nine straight games since Ted Williams in 1939, according to STATS.

"When I hit the homer, that was the first chills moment I've had in the big leagues so far," Bichette said.

Bichette's 11 game-hitting streak to start his career is the longest ever by a Blue Jays player.

"As an offense, we're kind of in the zone right now," Tauchman said.

Urshela hit .233 with one homer in 19 games with Toronto last season before being demoted to the minors in early July. He was sold to New York on Aug. 4.

"That's a big change for my career, coming to the Yankees from the Blue Jays," Urshela said. "I feel good to be here now."

Urshela has homered in three straight games for the first time.

Both of Urshela's homers came off left-hander Thomas Pannone (2-5), who matched a career worst by giving up seven runs in 2 1/3 innings. Tauchman connected off right-hander Zach Godley, who was making his Toronto debut after being claimed on waivers from Arizona on Wednesday.

Chad Green worked the sixth and Luis Cessa pitched the final three innings for his first save.

Blue Jays catcher Reese McGuire had a career-high four hits, including a solo homer off Cessa in the eighth. Derek Fisher also homered, his second in four starts since being acquired from Houston last month.

Blue Jays: OF Lourdes Gurriel Jr. left in the ninth with a cramp in his left quadriceps muscle. Gurriel grabbed at his leg while running out an infield hit and was replaced by Brandon Drury. Gurriel is day to day.

Urshela is the first Yankee with back-to-back multihomer games since Aaron Judge did it September 24 and 25, 2017.

The Chicago White Sox will host the Yankees next summer at the corn field in eastern Iowa where the movie "Field of Dreams" was filmed. The game is set for Aug. 13 in Dyersville, about 200 miles west of Chicago. A temporary 8,000-seat stadium will be built to accommodate the first major league game played in Iowa.

Blue Jays: RHP Sean Reid-Foley (1-2, 2.49) has allowed just one earned run in his past nine innings.