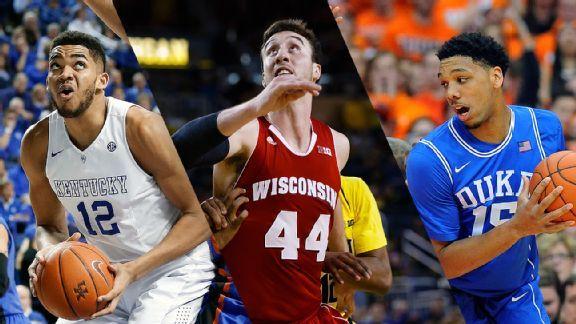 Kentuckyheads into the Final Four as an odds-on favorite to cap an undefeated season with a national championship.

The Westgate SuperBook in Las Vegas made Kentucky a minus-120 favorite to win the national title, shortly after the Final Four was finalized with Duke's win over Gonzaga. The Wildcats (38-0) are looking to become the first team to go undefeated since the 1976 Indiana Hoosiers, a feat that would hand the William Hill sportsbook its largest loss on a single prop bet in the company's three-year history in Nevada. Last summer, William Hill posted Kentucky's odds of going undefeated at 50-1. Money poured in on the Wildcats, and the book is now facing a mid-six figures liability.

The Badgers, who face Kentucky, and the Blue Devils, who face Michigan State in Saturday's Final Four, are both listed at 7-2 to win the championship at the SuperBook. The seventh-seeded Spartans are 8-1, just weeks after being listed at 100-1.

Michigan State opened as a 4.5-point underdog against Duke at most books. The Blue Devils were 8.5-point favorites, when they defeated the Spartans 81-71 on Nov. 18 in the State Farm Classic in Indianapolis. Duke coach Mike Krzyzewski is 8-1 all-time against Michigan State coach Tom Izzo.

A Duke national championship is the worst-case scenario for Las Vegas sportsbook operator CG Technology. Vice president of race and sports Jason Simbal said his shop took two five-figure bets on the Blue Devils winning it all, one $50,000 at 8-1 and the other a slightly smaller amount at 7-1.

In the other semifinal, Kentucky opened as a 6.5-point favorite over Wisconsin. Limits will be much larger later in the week, but early influential money came in on the Badgers on Sunday, shrinking the point spread to Kentucky minus-5 in Las Vegas and at some prominent offshore sportsbooks known to cater to big bettors.

"One of the groups took [Wisconsin] plus-6 and 5.5," Ed Salmon, oddsmaker at the SuperBook, said.

At CG Technology, nearly seven times more money had been bet on Wisconsin than Kentucky as of Sunday evening, according to Simbal.

This isn't the only time during the tournament punters have been betting against the Wildcats. In Kentucky's Sweet 16 game against West Virginia on Thursday, 96 percent of money-line bets were on the underdog Mountaineers. Among the four percent of bets on the Wildcats: An $800 bet at -1300 odds that paid $61.55. Kentucky won 78-39.

Wisconsin advanced to face Kentucky by beating Arizona as a small underdog. The Badgers were the only underdogs to win outright in the Elite 8, leading to a big weekend for the betting public.

"It was the players' weekend," Jay Rood, MGM vice president of race and sport, said. "We gave some back."

Duke was the biggest thorn for Rood, especially Friday night, when a controversial ending in the Blue Devils' 63-57 win over Utah on Friday produced a seven-figure swing against the book.