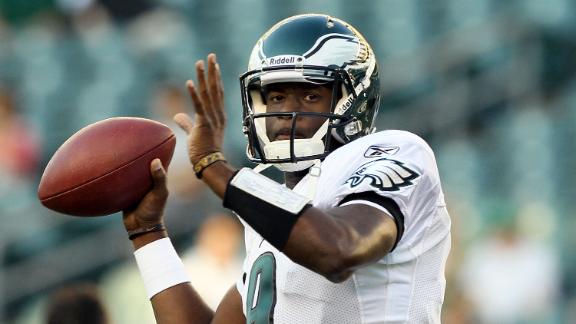 Quarterback Vince Young, who hasn't played in the NFL since 2011, announced his retirement Saturday.

"I'm retired," Young told KXAN in Austin, Texas. "Unless we get a great opportunity, something guaranteed ... I've already started moving forward. ... It's definitely official, I think, in my book."

Young, who didn't play in the NFL this past season after being cut by the Green Bay Packers in the preseason, participated in the Browns' three-day minicamp before signing with the team May 1. The team signed veteran quarterback Tyler Thigpen on the same day and released the 31-year-old four days after drafting Johnny Manziel.

The No. 3 overall pick in 2006 by the Tennessee Titans, Young earned Rookie of the Year honors and made the Pro Bowl in 2006 and 2009 while starting for the Titans. He was released in 2011 after a falling out with coach Jeff Fisher.

In parts of six seasons with the Titans and Eagles, Young threw for 8,964 yards and 46 touchdowns.

Despite a rookie deal with the Titans that guaranteed $25.7 million, financial issues had plagued Young in recent years. In February, he reached a settlement with creditors a month after filing for Chapter 11 bankruptcy protection.

Since then, Young had been training in San Diego and Austin in the hopes of restarting his pro career. At his annual football camp in Round Rock, Texas, Young said Saturday he is still thankful he was able to fulfill a childhood dream by playing in the NFL, even if his career was a rocky one.

"I had my ups and downs," Young told KXAN. "I made the mistake of getting in to it with my coach, and that kind of hurt me a whole lot. When you go to different teams, they already have a bad perception of you. When that's out there, there's nothing you can do."

Young will now go to work for his alma mater, the University of Texas. He told the Houston Chronicle in April he would accept a job as an ambassador for the university whenever he decided to retire.

He won one national championship and was 30-2 as a starter at Texas. He led the Longhorns to a 13-0 record in 2005 and a Rose Bowl win over USC. He was a consensus All-American that season, won the Davey O'Brien Award and was runner-up for the Heisman Trophy.