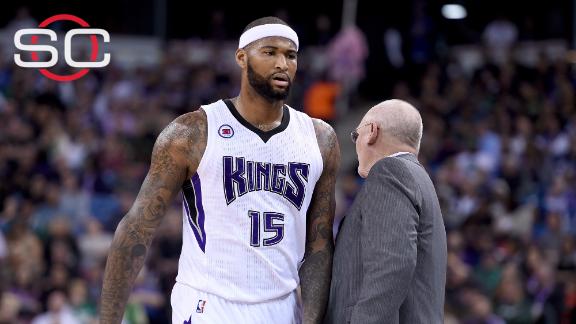 Sacramento Kings vice president Vlade Divac admitted Thursday that the relationship between coach George Karl and center DeMarcus Cousins isn't "pretty right now" but said he is working on getting everybody "on the same page."

Appearing on "The Jim Rome Show" on CBS Sports Radio, Divac talked about the rocky relationship between his coach and star player.

"Well, I'll be honest with you, it's not pretty right now, but I'm focused on bringing a better team this year and I think I did a pretty good job in this free agency and now I'm going to be focused on the two of them," he said.

He said he expects both Karl and Cousins to be with the Kings when the 2015-16 season starts.

Divac emphasized that he believes Cousins is the player the Kings should build around in the hopes of winning a championship in the future.

"I really believe in DeMarcus," he said, adding that he thinks Cousins is the Kings' "franchise guy."

He shot down rumors that Karl was trying to get Cousins traded, saying that only he would make that type of decision.

"DeMarcus is definitely our guy we want to build our team around," he said.

Divac said he and Karl share "the same philosophy of basketball."

"We have some differences, we are working on it and every day it's better and better," he said. "I really think I can create a healthy environment here and everybody should be on the same page by October."