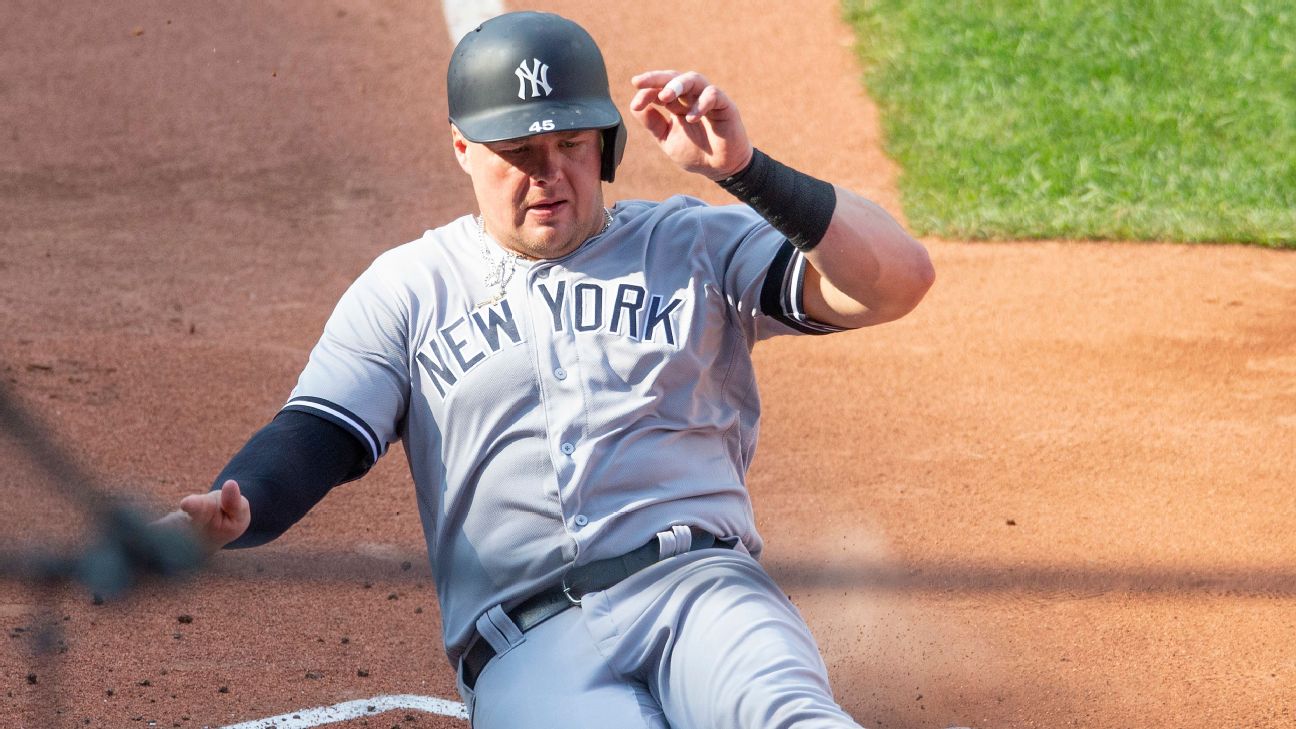 ESPN
By Coley Harvey
NEW YORK -- Yankees first baseman Luke Voit said late Friday that he feels better now that he has had a cortisone shot to help treat a sports hernia, but he remains unsure about whether he'll need a surgery to completely alleviate the issue.

Voit and the Yankees are planning to see how the shot takes effect within the next week before determining exactly what course of rehab action will come next.

"I trust what these guys are saying, and if after a week I don't feel like I should do [the surgery], I always have a chance to come back for the playoff run," Voit said.

If Voit, 28, does undergo the surgery, his recovery from the injury would end up taking longer than if he lets the hernia heal with rest and simple rehab. As Yankees general manager Brian Cashman pointed out Wednesday, after surgery Voit would be down for six weeks before also having to get back up to baseball speed on a rehab assignment for another couple of weeks after that.

That timetable would put his return somewhere close to the start of the postseason.

So far, Voit's rehab has mirrored the start of last month, when he was first sent to the injured list with an abdominal strain. Yankees trainers have been working on strengthening the muscles around his core -- "everything that's connecting"-- as he tries to put the focus on other muscle groups.

Voit returned from that initial IL stint July 13, and played in 16 games before going back on the IL on Wednesday. The belief is the abdominal strain, which Voit sustained while rounding first base on an extra-base hit in one of the London Series games in late June, is related to the sports hernia.

"When I came back I was really close. I won't say I was 100 percent, but I felt good enough where I was playing and I could manage it," Voit said of his return from his first IL stint. "Then I think progressively it got worse, and I'm trying to play through it. That's when some other stuff started bothering me. It's a weird injury. I've never had anything like this."

While playing through the injury for those 16 games, Voit eventually started having trouble covering first base and swinging pain-free. Once he realized that he started overcompensating in his swing and other muscle groups were starting to get affected, he realized it was time to get evaluated.

"Just got more sore in areas I wasn't used to. Everything was hurting."

It's all feeling a little better now, and perhaps by the end of next week he will know just what exactly it will take for the pain to decrease enough that he can be a valued contributor once again.

"I care about this team," Voit added, "and I want to give my best."
Report a correction or typo
Related topics:
sportsespnluke voitmlbnew york yankees
Copyright © 2020 ESPN Internet Ventures. All rights reserved.
More Videos
From CNN Newsource affiliates
TOP STORIES