Warriors in touch with Steve Kerr 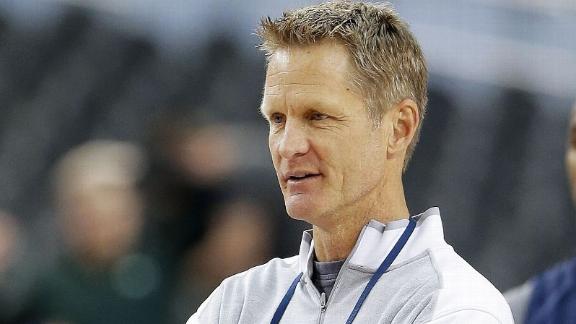 NEW YORK -- The Golden State Warriors have reached out to TNT broadcaster Steve Kerr to discuss their coaching vacancy, a league source confirmed to ESPNNewYork.com on Tuesday night.

Kerr also is considered a leading candidate to take over as coach of the New York Knicks and is said to be intrigued by the opportunity to work with Knicks president Phil Jackson in New York.

But now that the Warriors' job is open, Kerr feels compelled to at least listen to what Golden State has to say, a source told ESPN.com's J.A. Adande.

In addition to the Warriors and Knicks, the Utah Jazz are the latest team trying to barge into the race for Kerr, a source told ESPN.com's Marc Stein, but the sense in coaching circles remains that the Knicks are the favorites to land Kerr on the strength of his relationship with Jackson.

Kerr, who lives in San Diego, has several ties to the Warriors' organization, which fired coach Mark Jackson on Tuesday, including strong relationships with Warriors owner Joe Lacob, son Kirk Lacob (who works in Golden State's front office) and Warriors president Rick Welts, with whom Kerr worked closely in Phoenix.

Golden State's contact with Kerr was earlier reported by the New York Daily News on Tuesday.

Kerr and Phil Jackson met to discuss the Knicks' coaching vacancy late last month. Kerr won three titles with the Chicago Bulls while playing for Jackson and said last month that the Knicks wouldn't have any interest in him were it not for Jackson's presence.

Kerr spoke last month about the "strong connection" that he shares with Jackson.

"I know Phil [said] we shared the same space, which I think is well said," Kerr said. "We share a lot of the same philosophies. I learned a lot of my basketball from him and Tex Winter.

"It is safe to say that we have a lot of the same ideas. ... Obviously there is a strong connection between us and our beliefs."

Kerr has never coached before. He served as the general manager of the Phoenix Suns from 2007 to 2010.

Better Fit For Kerr: Warriors Or Knicks?
Stephen A. Smith and Skip Bayless debate whether the Warriors' or Knicks' coaching job is the best fit for Steve Kerr.

Which Job Should Steve Kerr Take?
Mike Golic and Mike Greenberg discuss whether Steve Kerr should take the Knicks or Warriors job.