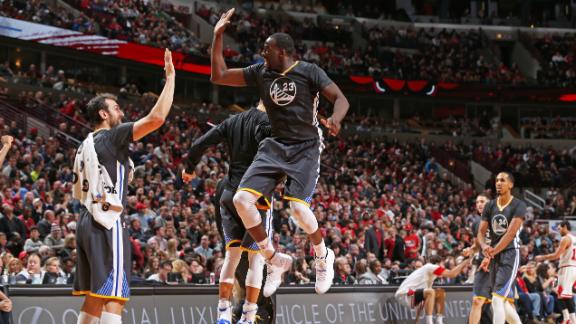 With the Golden State Warriors off to an NBA-best 17-2 record under first-year coach Steve Kerr, team owner Joe Lacob opened up about former coach Mark Jackson in a Menlo Park, California, luncheon for fellow venture capitalists earlier this week.

In comments published by InsideBayArea.com, Lacob detailed why he hired and eventually fired Jackson.

Of Jackson's firing, Lacob said, "Part of it was, he couldn't get along with anybody else in the organization. And, look, he did a great job -- and I'll always compliment him in many respects -- but you can't have 200 other people in the organization not like you."

Lacob described Jackson's style as something the Warriors initially needed to change for the culture of the organization, even though Jackson was an inexperienced coach who the owner said "didn't know X's and O's, really."

Lacob said the key was to hire an experienced staff around Jackson, an idea that was met with resistance from him.

"You can't have a staff underneath you that isn't that good," Lacob said. "And if you're going to get better, you've got to have really good assistants. You've got to have people that can be there to replace you. We all know this from all of our companies. It's ... Management 101."

"I think [Kerr] will be great," Lacob said. "And he did the one big thing I wanted more than anything else from Mark Jackson, who just wouldn't do, in all honesty, which is hire the very best. Carte blanche. Take my wallet. Do whatever it is to get the best assistants there are in the world. Period. End of story. Don't want to hear it. And [Jackson's] answer was, 'Well, I have the best staff.' No, you don't."

Jackson, now an ESPN analyst, was fired in May after helping the Warriors to a 51-31 regular-season record and a first-round playoff showing last season. After the firing, he said he regretted his handling of two assistants at the end of the regular season. The Warriors reassigned Brian Scalabrine to the D-League because of what Jackson called a "difference in philosophies." Then the Warriors fired Darren Erman on April 5 for reportedly recording conversations during coaches' meetings and discussions between coaches and players without their knowledge.

Jackson at the time also denied a report that he had "zero relationship" with assistant general manager Kirk Lacob, who is the owner's son.

Joe Lacob did have some praise for Jackson, crediting him for making the team better and calling the decision to fire him "a really tough call."