Boy with cerebral palsy, 8, casts aside walker to complete triathlon 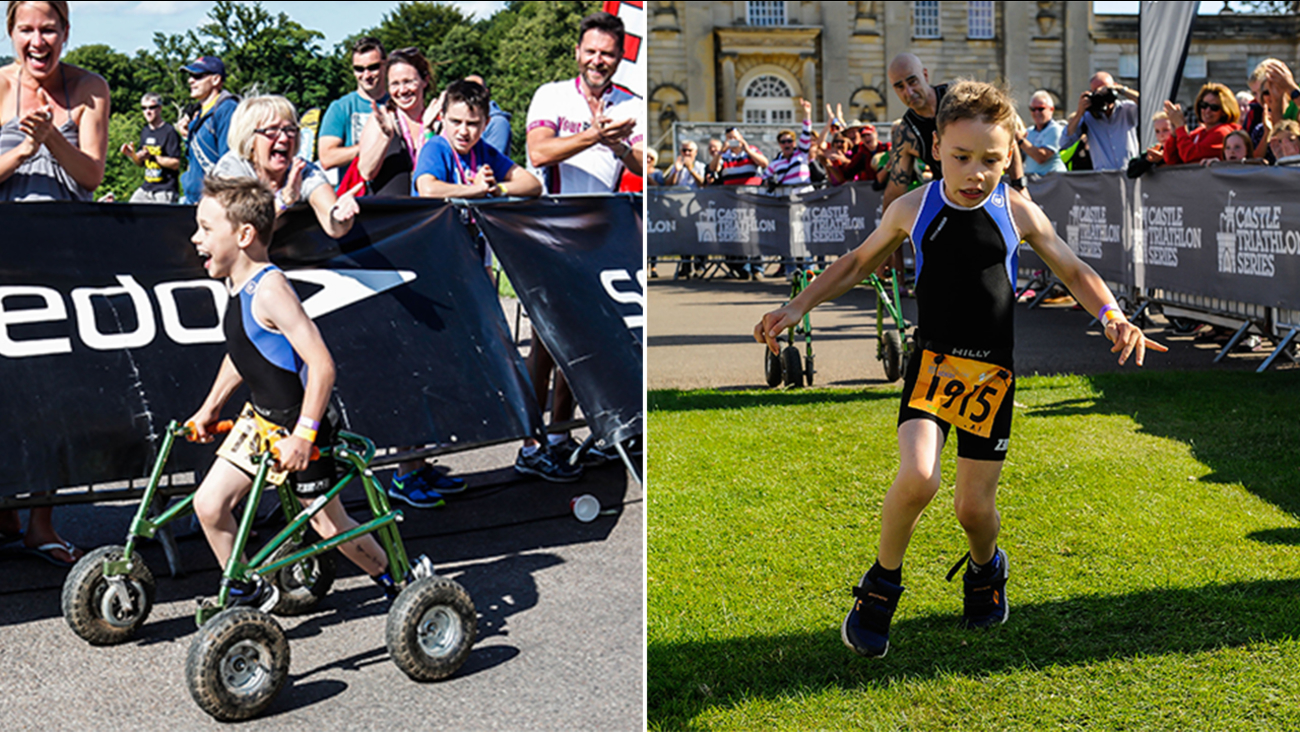 Bailey Matthews had an emotional finish to the Castle Howard Triathlon in England. The 8-year-old with cerebral palsy cast aside his walker to finish the race by himself. (Castle Triathlon Series/Peachysnaps.com)

Bailey Matthews, an 8-year-old with cerebral palsy competing in a triathlon, had already earned the crowd's cheers as he neared the finish line. Then he cast aside his walker.


Tap to watch if on News app.

In a emotional final stretch of the Castle Howard Triathlon in England, the little boy smiled as he pushed himself forward, let go of his walker and stumbled across the finish line. The announcer gave a running commentary as hundreds of spectators cheered on Bailey.

It was the first ever triathlon for the Doncaster boy, according to the event's Facebook page. He had completed a 100-meter lake swim, a 4,000-meter bike ride and nearly finished a 1,300-meter run. His condition impairs his motor function, so he had some help along the route. The last 20 meters, though, he did all by himself.

His mom, Julie Hardcastle, told The Yorkshire Post that the crowd's support made all the difference.

"You can see his little face when he came round and saw everyone, that was his way of finishing in style and showing everyone what he could do," she said. "It was the response from the crowd that pushed him to do that."
Related topics:
sportscompetitiondistractiondisabilitychildrentriathlonbuzzworthycerebral palsy
Copyright © 2021 WABC-TV. All Rights Reserved.
DISTRACTION
Carrie Fisher describes 'Star Wars' filming in rare 1977 interview
What is pi? Here's an explanation using pie
Fun facts about Dr. Seuss in honor of his birthday
79-year-old man makes 1st-ever snow angel
TOP STORIES
Kids dive for cover as gunman opens fire on NYC sidewalk
NYC marks Juneteenth with block party, unveils Economic Justice Plan
Mom, 7-year-old daughter found dead in apparent murder suicide
From UWS to Queens: Dog found safe after journey through NYC
Juneteenth ceremony to consecrate sacred burial ground at NYC park
10 injured, including firefighters, after FDNY truck crash
Long Island facing serious lifeguard shortage for summer
Show More
Saharan dust moving into Florida from Atlantic coast
Father gives daughter life-saving gift as living organ donor
Teen takes ride of a lifetime thanks to MTA, Make-A-Wish Foundation
New book lends wisdom to dads, from dads
Dance Against Cancer returns to stage with touching performance
More TOP STORIES News