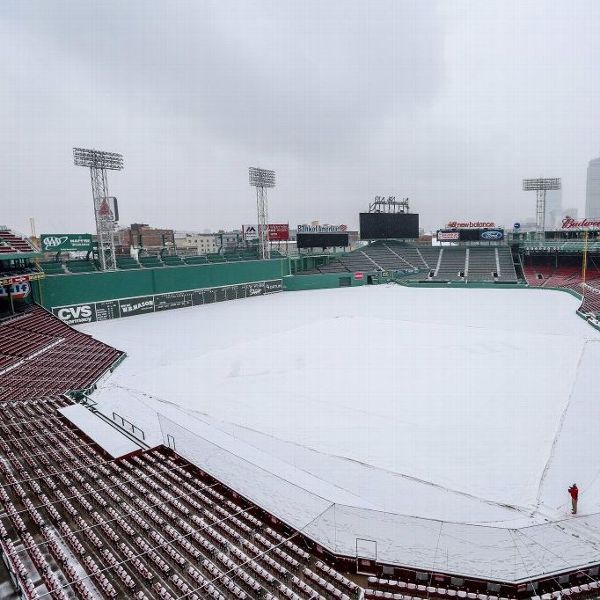 The Los Angeles Angels' game against the Royals, in which Japanese star Shohei Ohtaniwas scheduled to pitch in Kansas City, was the latest to be postponed Sunday because of cold temperatures.

The game will be made up on June 25 in Kansas City.

"Just the simple fact that I was going to be pitching in cold weather, that was a little worrisome for me,'' Ohtani said through an interpreter. "Also, I was worried my fingertips might lose the feel for the ball. That was one of the things I was worried [about].''

After a day off Monday, Ohtani will start Tuesday against the Boston Red Sox as the Angels open a six-game homestand in Anaheim.

The Angels-Royals game was the sixth game postponed Sunday by weather. The last time six MLB games were postponed was Sept. 12, 2008.

Monday's Red Sox game against the Baltimore Orioles in Boston also was postponed, it was announced Sunday, with the forecast calling for long periods of rain. This is the first time a Red Sox Patriots' Day game -- a traditional 11 a.m. start on the same day as the Boston Marathon -- has been postponed since 1984. That game has been rescheduled for May 17.

A split doubleheader in Detroit between the New York Yankees and Tigers, along with a game in Cleveland between the Indians andToronto Blue Jaysand a game in Chicago between the Cubs and Atlanta Bravesall were postponed Sunday afternoon.

The Tigers announced the games will be rescheduled as a split doubleheader on June 4, with the first game beginning at 1:10 p.m. ET and the second beginning at 7:10.

Sunday's Yankees-Tigers doubleheader had been scheduled because of a Saturday rainout.

The Blue Jays-Indians game has been rescheduled as part of a doubleheader on May 3. The Blue Jays and Indians also had Saturday's game postponed.

The Cubs-Braves game will be played May 14.

The Chicago White Sox-Minnesota Twins game was postponed late Saturday night because of heavy snow in the Twin Cities.

The game between the Cardinals and Reds, which was scheduled for a 1:10 p.m. ET start, was delayed by rain and started at 3:45 p.m ET.