What's next for the New York Mets after Luis Rojas' departure 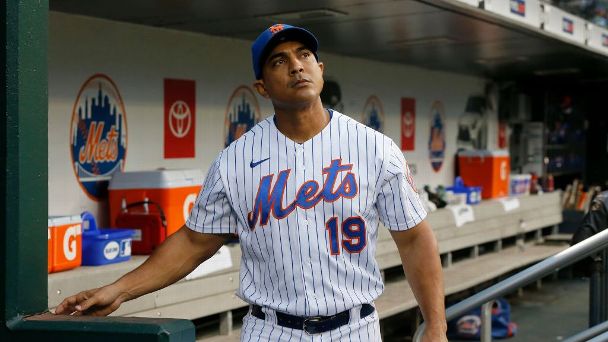 Luis Rojas is out as manager of theNew York Mets after the team limped to a disappointing third-place finish in the National League East. Rojas finishes his tenure with the team with a 103-119 record over two seasons. Now, the team's thoughts will turn to 2022. We asked Bradford Doolittle and David Schoenfield for their thoughts on the future of one of the most frustrating teams in baseball this year.

Whose names are we most likely to hear as candidates for the Mets job?

Doolittle: Buck Showalter, Mike Scioscia, Bruce Bochy -- recent, kind-of retired managers with great resumes. Scioscia most recently led the American Olympic squad, but he sounded content to limit his coaching to that. It's hard to imagine Bochy leaving the West Coast at this point -- especially when the San Diego Padres job might come open. Ron Gardenhire, who played for the Mets, is an option, but he retired for health reasons and this job doesn't seem like a great fit. A second-chance candidate like Brad Ausmus could surface, especially given Gabe Kapler's breakout in San Francisco. There are several available bench coaches on successful teams, like Houston's Joe Espada, Milwaukee's Pat Murphy or Atlanta's Walt Weiss. Another Braves coach, Ron Washington, should get mentioned. A manager attached to a possible new baseball honcho, ie., Bob Melvin via Billy Beane, was a hot rumor last month. Really, though, it comes down to this: Are you going to hire an accomplished lead executive and, if so, are you going to let that person make this decision -- as you should?

Schoenfield: To some degree, whom the Mets hire as the new president of baseball operations/general manager will influence the potential candidates. If it's somebody like Theo Epstein or David Stearns (the Brewers' PBO), that person will presumably -- although not guaranteed -- look to hire somebody they are familiar with. Given Rojas' inexperience before getting the Mets' job (after Carlos Beltran was ousted due to his part in the Astros' sign-stealing scheme), you have to think there's a good chance the Mets look to hire somebody with a long resume. That gives us an admittedly short list of names like Buck Showalter, Brad Ausmus and Rick Renteria. Ron Washington is probably too old at 69 (although Dusty Baker and Tony La Russa are both 70-something). Ned Yost isn't the sabermetric-savvy skipper you want these days. Andy Green had a terrible record with the Padres. Among the first-time candidates, Astros bench coach Joe Espada has interviewed for managerial positions before, including with Epstein and the Cubs in 2019. Another option is Brewers' bench coach Pat Murphy, formerly of Notre Dame and Arizona State, although he's 62 and the recent trend has certainly been to hire younger first-time managers.

Who would you hire if you were in charge?

Doolittle: At this point, I'm partial to younger managers in the Kapler mold, who are personable, good collaborators and have internalized all manner of next-generation processes for running a team and a staff. So I'd lean towards someone like Will Venable, who worked with Theo Epstein in Chicago, or possibly Don Kelly -- recently retired players who have really strived to put together the full toolkit.

Schoenfield: The Mets need some professionalism in the organization after the antics of the players this year -- and not just the thumbs-down disaster. Remember when the players "invented" a hitting coach early in the season? And then Chili Davis got fired a few days later? Not funny, guys. Showalter would certainly provide that steady hand. At 65 he might be viewed as a short-term solution -- but I think that's what the Mets need right now.

What is the biggest thing that needs to change for the Mets to improve next season?

Doolittle: They have to stay healthier, for sure. That's a no-brainer. But even beyond availability issues, they need to get to the root of this year's widespread hitting shortfall. There were an awful lot of really disappointing performances, and while that could be a mere coincidence of bad seasons, I'd want to make sure there's not something systemic going on there. That would be part of the project of the new general manager (of whatever the title turns out to be) and the new skipper.

Schoenfield: Brad's right. The offense was a complete, unmitigated disaster. What happened to Francisco Lindor? Where did Dom Smith's power go? Were Jeff McNeil's struggles reversible? Once again, they also need to address the defense and get more athletic -- Javier Baez, for his all his swing-and-miss flaws, played well with the Mets and provided the energy, defense and speed that the team drastically needs. Find a legit center fielder, move Brandon Nimmo to left, trade Smith (or make him a bench player) and consider re-signing Baez if he's willing to play second.

What was the moment that Rojas had to go?

Doolittle: It's hard to pinpoint a precise moment. The Mets were still in the race into September, but rather than maximizing what chance they had, they instead lost 10 of 11. Somewhere in there was probably the final straw. But there were too many troubling instances in which Rojas just didn't seem in tune with what his club was doing, like the Francisco Lindor/Jeff McNeil/rat incident. Maybe he was just playing coy, but it's the Mets, and they need a stronger presence than that.

Schoenfield: Yep, he seemed a little out of his league, even going back to last year. From a tactical standpoint, he did seem to do a better job of handling the pitching staff in 2021 after he drew the ire of Mets fans for many of his moves in 2020 -- and given the injuries to the starting rotation, it wasn't easy to get through this season. To steal NCAA terminology, it was the lack of institutional control -- which, of course, has sort of been a Mets problem over an entire decade now.

How long will it take before the Mets are legit title contenders?

Doolittle: There is no reason why theycouldn't be right there a year from now, given the right moves and the right leadership. The top-of-the-roster talent is there. But they have to improve the depth.

Schoenfield: Next season. Hey, the Braves just won the division with 88 wins. The Nationals and Marlins are not good (although the Marlins have interesting young pitching). The Phillies are stuck in mediocrity. The Mets can win this division next year -- especially if Jacob deGrom is healthy.

What is the next managerial change we'll see now that the MLB offseason has begun?

Doolittle: Guessing Jayce Tingler in San Diego is next. To what extent it's fair to blame him for the Padres' disappointing finish is hard to say. But all the rumors have pointed towards his dismissal, and, again, Bochy is right there. It's hard to say whether he and general manager A.J. Preller would mesh, but even if that's not a fit, I'm guessing the Padres move on from Tingler.