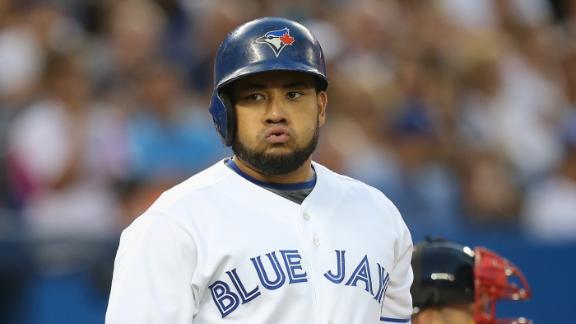 CHICAGO -- The White Sox have found an upgrade in left field by agreeing with free agent Melky Cabrera, a baseball source confirmed to ESPN.com.

The three-year contract is worth $42 million, pending a physical exam which is expected to take place early this week, a baseball source told ESPN.com's Jerry Crasnick.

Cabrera, who was believed to have significant interest from theSeattle Mariners, would take over in left field and continue an impressive string of offseasonacquisitions from general manager Rick Hahn.

The White Sox have not confirmed the signing, which comes days after a trade for pitcher Jeff Samardzija was made official and three days after the signing of reliever David Robertson was announced.

But White Sox outfielder Adam Eaton mentioned Cabrera in a welcome message on Twitter on Saturday night, and Cabrera retweeted the message.

News of the agreement was first reported by Chicago sports talk station WSCR 670-AM.

Hahn had indicated after the Robertson signing that money was now tight, but a Cabrera signing would contradict that stance. The White Sox came into the offseason with money to spend after big contracts like those for Jake Peavy, Alex Rios, Paul Konerko and Adam Dunn all have come of the books in the past two years.

Heading into the winter meetings on Monday, the White Sox's biggest needs were with relief help, a right-handed starter and a left fielder. Robertson, Samardzija and Cabrera would provide an answer to all three areas in that order. The White Sox have also acquired left-handed reliever Zach Duke and first baseman/designated hitter Adam LaRoche since the 2014 season ended.

The White Sox appeared to be in the middle of a rebuild that started when Peavy was traded at the 2013 non-waiver trade deadline. But with the additions of Robertson and Cabrera, that timetable now appears accelerated.

Cabrera, a switch-hitter, has a career .286 average, with a .339 on-base percentage over 10 seasons. He was an All-Star in 2012 with the San Francisco Giantsbut ended that year with a 50-game suspension after a positive test for elevated testosterone levels.

The White Sox tendered a contract to outfielder Dayan Viciedo earlier this month, but a Cabrera acquisition would make Viciedo nothing more than a backup. Cabrera provides an upgrade over Viciedo defensively.