Who are the top five power forwards in the WNBA? 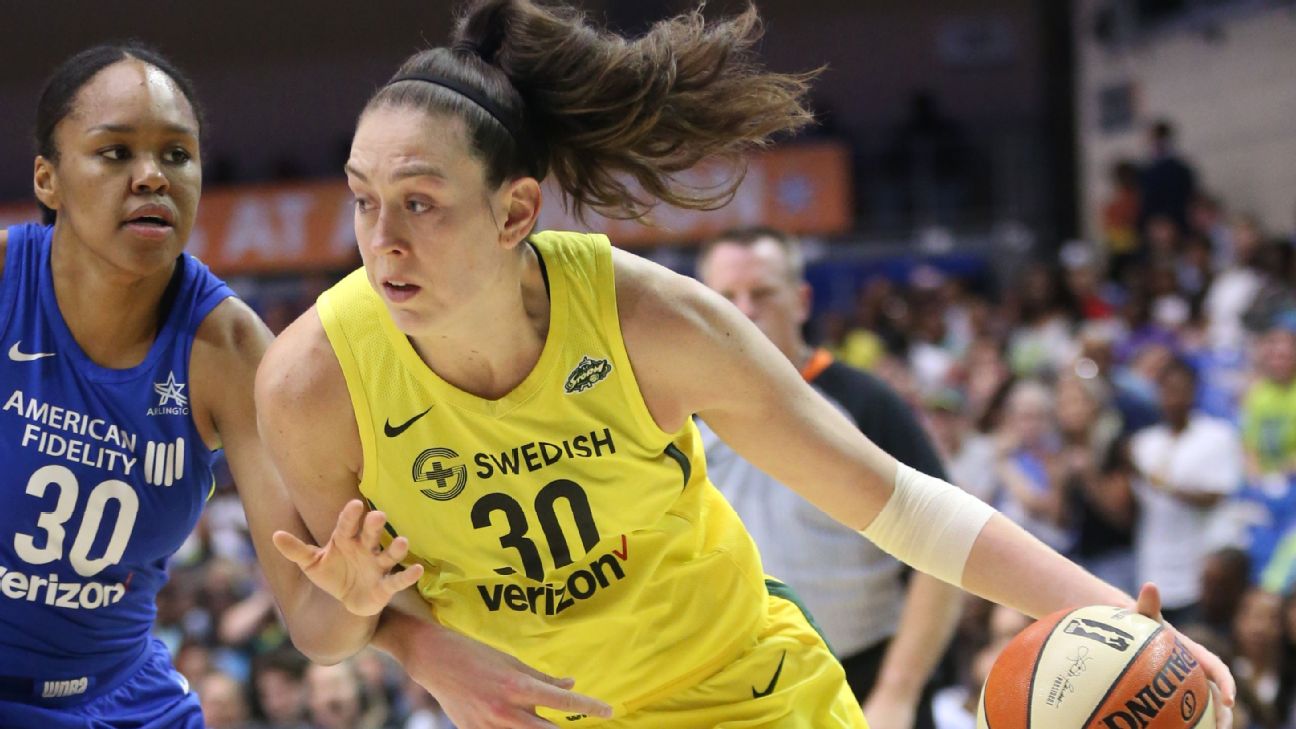 The power forward position has emerged as the premier spot in the modern WNBA. Two of the league's last three MVP awards have gone to players who primarily line up at power forward (Elena Delle Donne and Nneka Ogwumike), a third power forward (Tina Charles) won MVP in 2012 and yet another is a strong early contender for this year's MVP.

With all that star power, picking the league's top five power forwards requires leaving out four-time All-Star Rebekkah Brunson, the only player in WNBA history to win five championships. There's also no room for Connecticut's Chiney Ogwumike, who has played at an All-Star level while splitting time at both power forward and center this season coming off a ruptured Achilles.

If picking the top five is hard, ranking them against each other is nearly impossible. But here's an effort, informed by their advanced statistics.

As a rookie, this year's No. 1 overall pick has immediately made a case as one of the league's 10 best players. Having joined the WNBA's worst team from 2017 (8-26), Wilson has been asked to carry a huge load. The 28 percent of the Aces' plays she's using with a shot attempt, trip to the free throw line or turnover rank third in the WNBA. In that context, Wilson's above-average .537 true shooting percentage is impressive. She also has the league's second-lowest rate of turnovers among plays she has finished, behind only spot-up shooter Essence Carson. No wonder Las Vegas is scoring 14.5 more points per 40 minutes with Wilson on the court, per Paul Swanson of the Minnesota Lynx.

Charles is listed as a center but was the All-WNBA first team pick at power forward last season yet finishes fourth on this list, a testament both to the depth at the position and a disconnect between how Charles is viewed and her advanced stats. Charles leads the league with a 30 percent usage rate, helping her rank eighth in the league in scoring at 19.4 points per game. However, Charles hasn't been as efficient as Wilson, posting a .504 true shooting percentage that's right in line with her career mark (.502). Charles has also slipped this season on the defensive glass, pulling down a career-low 5.8 defensive rebounds per 36 minutes, down from 8.2 last season. Frankly, Wilson has been the better player this season, but Charles' track record of success gives her the nod at fourth.

At this point, any of the top three can make a claim for the top spot on the list. Delle Donne leads the WNBA in PER this season according to Basketball-Reference.com, having finished third in 2017 behind MVP Sylvia Fowles and Brittney Griner. Delle Donne this season has seamlessly moved over from small forward with Emma Meesseman sitting out and leads all five players on this list in both assist and block rate. The only question with Delle Donne is durability; she missed nine games in 2017 and missed four earlier this season with an illness that carried extra risk because she has Lyme disease. The one time in her career Delle Donne has played more than 30 games in a season, she won MVP in 2015.

A paragon of efficiency, Ogwumike set the WNBA record with a .737 true shooting percentage during her 2016 MVP campaign, shooting 66.5 percent from the field. Naturally, she hasn't quite been able to keep that up, but her .642 true shooting this season still leads players on this list. The knock on Ogwumike is that she doesn't create as much of her own offense as the league's top stars; her 23 percent usage rate is also lowest among these five players. Nonetheless, Ogwumike led the WNBA in my wins above replacement player metric (WARP) in 2016 with 10.5 and finished second to Sylvia Fowles last year with 9.0.

In her third WNBA season, Stewart has climbed atop the league in WARP after finishing second to Ogwumike as a rookie in 2016. Stewart only tops power forwards in defensive rebound percentage (24 percent), but what stands out is her near-complete absence of weakness. She creates her own shot (28 percent usage) or finishes in the pick-and-roll efficiently (.640 true shooting percentage) and is a versatile defensive contributor as either a weak-side shot-blocker or a part of the Storm's effective trapping defense. Led by Stewart, Seattle has been perhaps the league's most surprising team, starting 10-5 after winning just 15 games in 2017. As a result, Stewart deserves to be considered the WNBA's best power forward.
Report a correction or typo
Related topics:
sportsespnwnbanew york libertynneka ogwumikebreanna stewartseattle stormlas vegas acesbest power forwardsespnwaja wilsontina charleslos angeles sparkselena delle donnewashington mysticsnews au espnw
Copyright © 2021 ESPN Internet Ventures. All rights reserved.
More Videos
From CNN Newsource affiliates
TOP STORIES