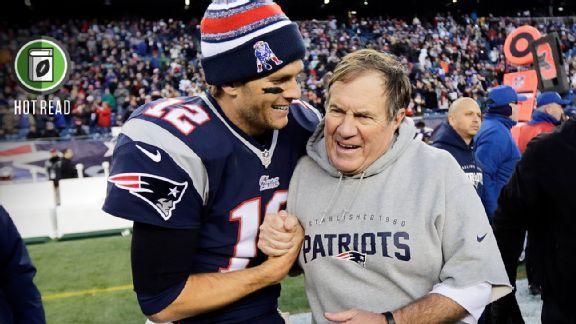 CHANDLER, Ariz. -- Those around him say New England Patriots coach Bill Belichick is driven, uncompromising and that he keeps his intentions well camouflaged behind a surrender-nothing, stoic expression.

But yet Vince Wilfork said Wednesday that Belichick is different for his sixth Super Bowl trip -- the defensive tackle used words like "more understanding" and "soft heart" to describe the coach.

"I think Bill had to do a good job of that ever since I've been in the league because we've changed so much," Wilfork said. "We were a veteran team. [Then] it was a younger team -- at one point we were the youngest team in the league. So I think he had to try to find the identity in what works for that team.And I think he's done a great job over the years of doing that.

Wilfork, who was selected with the 21st pick of the 2004 draft, is in his 11th season with the Patriots. He and quarterback Tom Brady are the only players on New England's roster who played in Super Bowl XXXVIII to close out the '04 season. So he's covered some ground with Belichick along the way.

"Yeah, I've seen the difference in Bill in the 11 years that I have been here, and I tell him he is getting soft," Wilfork said. "But this is a different era of football now -- with how the team has shaped up and how a lot of guys are younger guys.

"You don't really have that veteran team that he used to have. When I first came in the league, he had a veteran team that didn't take much to get those guys going. But if I have to say anything, I think over the years he got a soft heart. He's more understanding now."