Wolves talking Love only with Cavs 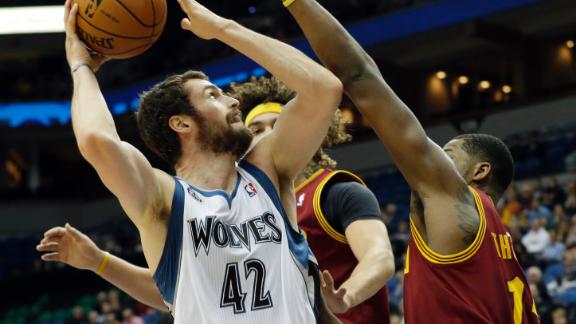 The Minnesota Timberwolves were engaged in serious Kevin Love trade talks with no teams other than the Cleveland Cavaliers on Wednesday, adding to the growing belief around the NBA that Love teaming up with LeBron James is inevitable, sources have told ESPN.com.

As has been the case for a week, the Cavaliers remain the front-runners to acquire Love in a trade co-headlined by No. 1 overall draft pick Andrew Wiggins. However, sources this week have described the Cavs as the only team in contention for Love.

Those sources say the Chicago Bulls have become increasingly pessimistic about their chances of trumping Cleveland's offer, while the Golden State Warriors remained unwilling to bend on their longstanding refusal to surrender Klay Thompson in a deal for Love.

Wiggins is not eligible to be dealt until Aug. 23 after signing his rookie contract last week, but numerous league insiders -- some of whom are gathered in Las Vegas for this week's Team USA training camp -- have begun to describe a Love-to-Cleveland trade as a "when" transaction as opposed to an "if."

With three weeks to go until Wiggins is eligible to be swapped for Love, one source said Wednesday that James himself already is "looking forward" to the prospect of welcoming the All-Star power forward as his newest teammate.

NBA officials are adamant that there can be no acknowledgement of a trade, from either the Wolves or the Cavaliers, until the 30 days pass from Wiggins' signing. Sources say that, furthermore, the teams continue to discuss potential trade constructions, such as bringing in a third team or adding players beyond the widely reported principals.

The expectation remains that the Wolves will emerge from this saga with no less than Wiggins, 2013 No. 1 overall pick Anthony Bennett and a future first-round pick from the Cavs in exchange for Love.

Last week, ESPN.com reported that the Bulls had re-emerged as a serious suitor for Love, despite the fact they had a few more trade assets to offer Minnesota before last month's NBA draft. But sources said this week that Chicago essentially has conceded to the Cavs, knowing it can't furnish a player with both Wiggins' superstar potential and his favorable rookie-scale contract.

Chicago general manager Gar Forman, who has been attending this week's Team USA camp in Las Vegas, wouldn't rule out another trade before the start of the season but insisted to assembled reporters Wednesday that the Bulls "really like the group we have" after the free-agent addition of Pau Gasol and with the looming arrival of prized rookies Nikola Mirotic and Doug McDermott.

Various other developments over the past few days have only added to the perception that a Minnesota-Cleveland swap will be consummated as soon as league rules allow it.

As ESPN.com reported, Minnesota has begun exploring its options for acquiring Thaddeus Young from the Philadelphia 76ers, targeting Young to potentially replace Love in the Wolves' starting lineup as their power forward next to center Nikola Pekovic.

The Wolves also signed veteran guard Mo Williams this week, making fellow vet J.J. Barea -- who sources say Minnesota is determined to offload as part of a Love deal -- more available. It's believed the Wolves hope to convince Cleveland to take Barea as part of a Love trade or find a third team to absorb Barea's expiring contract.

Cavs officials have become confident about their chances of assembling a trade framework that the Wolves ultimately will accept to surrender Love, who holds more than the usual sway in terms of where he winds up thanks to his ability to become a free agent in July 2015.

Although Love, 25, is expected to opt for free agency after next season even if he's dealt to Cleveland, sources say that's purely because he can secure a far more lucrative contract next summer than he could going the extension route. Sources told ESPN.com earlier this month that Love is highly intrigued by the idea of playing alongside his Olympic teammate on a full-time basis and is not put off by the fact that James' new contract with the Cavs spans only two seasons and includes a player option to return to free agency next summer.

Minnesota owner Glen Taylor insisted earlier this month that he wanted to keep Love and that the Wolves were prepared to open the season with Love on the roster. But numerous rival teams, sources say, believe Minnesota knows it has to part with Love before the start of the new season, given the extremely public nature of Love's unwillingness to commit to the Wolves beyond this season.

The Warriors conceivably could still give Cleveland something to worry about if they suddenly put Thompson on the table while the Cavs are waiting for Wiggins to become trade eligible, but sources say Taylor prefers a package headlined by Wiggins to a Thompson-led haul for Love. Thompson is eligible for a lucrative contract extension from the Warriors or any team he's traded to between now and Halloween, whereas Wiggins is not only the biggest prize from last month's draft but also far more affordable over the next few seasons.

After a lengthy delay while using all of its remaining cap space to try to fortify the roster around James, Cleveland finally signed Wiggins on Thursday to a four-year deal with a starting salary of $5.5 million. That started the 30-day clock. The Cavs have long maintained that a trade for Love ultimately would be easier if their prized rookie was under contract -- despite the mandatory wait -- since Wiggins' new salary can make the cap math easier in a potential Love deal. Had he remained unsigned, Wiggins' rights would have carried no monetary value in a trade.

And while the Cavs naturally would prefer to keep Wiggins, their motivation to complete this deal for Love is understandable given how well the big man's combination of elite rebounding, passing and long-range shooting ability should complement James' game.

Timberwolves Talking Love Only With Cleveland
Marc Stein talks about why the Timberwolves are only engaged in serious Kevin Love trade talks with the Cavaliers.