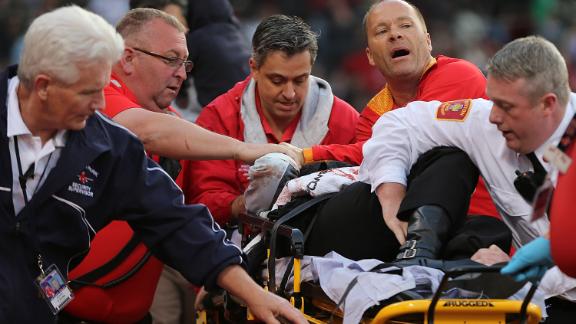 BOSTON -- A fan hit by a broken bat at Fenway Park is expected to survive after sustaining life-threatening injuries during a game Friday night between the Oakland Athletics and Boston Red Sox.

Tonya Carpenter remained in serious condition Sunday at Beth Israel Deaconess Medical Center in Boston. She was struck in the head by Oakland player Brett Lawrie's bat as she sat between home plate and the third base dugout at Fenway Park with her son and a friend.

Her friends said on a gofundme page started for the 44-year-old Carpenter that she was lucid after surgery Friday, but faces a long recovery. They said she's "a beautiful, positive, upbeat, hardworking single mom who would do anything'' for family and friends.

Her family said in a statement Saturday they're "grateful to all who have reached out with thoughts and prayers.''

Carpenter had posted a Facebook photo from the game earlier in the evening. A longtime friend, Sheila Hokanson of Charlton, Massachusetts, liked the post and said Carpenter was there with her son and a friend.

"They were just going to a game,'' Hokanson said in a telephone interview. "It was just, if you get a chance to get tickets, you grab them and you go and sit where the ticket happens to be."

A "moment of reflection" was held for Carpenter at Fenway Park before Saturday's game, which the Red Sox won 4-2.Lawrie was out of the lineup, but manager Bob Melvin said it was because of a back issue, not because of any psychological effects after the incident. He entered as a pinch hitter in the eighth inning.

"I got sick. I couldn't sleep last night," saidRamirez, who hit a two-run home run in the bottom of the first to give the Red Sox a 2-0 lead. "I went to bed late and I actually posted something that everybody [should] pray. I hope she gets back and gets better.''

Friday night's game was halted in the second inning when Lawrie broke his bat on a grounder and part of it hurtled into the stands and struck Carpenter, who was sitting a few rows off the field between the backstop and Oakland's dugout on the third-base side. Emergency crews tended to a bloodied Carpenter and wheeled her off the field on a stretcher.

There are signs posted on the low retaining wall facing fans in the front row that read: "Be Alert. Foul Balls and Bats Hurt."

Alex Merlis, of Brookline, Massachusetts, said he was sitting in the row behind the woman when the broken bat flew into the stands.

"It was violent," he said of the impact to her forehead and top of her head. "She bled a lot. A lot. I don't think I've ever seen anything like that."

Merlis said the woman had been sitting with a small child and a man. After she was injured, the man was tending to her and other people were trying to console the distraught child, he said.

After the game, Lawrie said he hoped the woman would recover.

"I've seen bats fly out of guys' hands in the stands and everyone's OK, but when one breaks like that, has jagged edges on it, anything can happen."

Concerned about a rash of flying broken bats and the danger they posed, Major League Baseball studied the issue in 2008 and implemented a series of changes to bat regulations for the following season.

"I do know that MLB is probably taking a look at the incident last night, as they do with any bat that flies into the stands," Red Sox manager John Farrell said.

Multiple-piece bat failures are down about 50 percent since the beginning of the 2009 season, MLB spokesman Michael Teevan said.

"You have a ballpark here that's how old, and it's close, you have some maple bats that break. I think MLB and the players' association have talked long and hard about how they can try to keep this from happening," Melvin said.

Though dozens of fans at big league ballparks are struck by foul balls each season, there has been only one fatality, according to baseball researchers -- a 14-year-old boy killed by a foul line drive off the bat of Manny Mota at Dodger Stadium in 1970.

The National Hockey League ordered safety netting installed at each end of NHL arenas after 13-year-old Brittanie Cecil was struck by a deflected puck at a Columbus Blue Jackets game in 2002. She died two days later, and her parents eventually settled with the team, the league and arena management for $1.2 million.