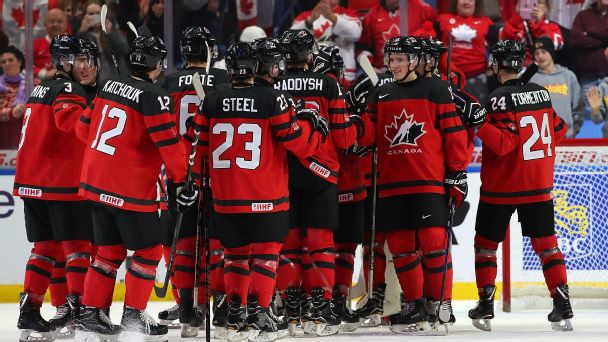 BUFFALO, N.Y. -- Although it won't come against the team that took gold from it last year, Canada has a chance to take care of some unfinished business on American soil at the 2018 IIHF World Junior Championship. Canada will look to take back its world junior championship crown against Sweden on Friday.

Seven players from last year's team that lost to the United States in a heartbreaking shootout will be in the lineup again, with Dominique Ducharme behind the bench for the second straight year. Although the head coach is in a familiar position, there is a clean slate in 2018.

"It's going to be a different game. It's a different tournament, a different group," Ducharme said after Canada defeated the Czech Republic 7-2 in a lopsided semifinal Thursday night.

It will indeed be a different game, as Sweden presents a different challenge for the Canadians. At the world juniors, it's usually Canada that boasts the biggest stars and highest-profile prospects, and the team often will be the favorite. However, as the Canadians enter Friday's gold-medal game, much of the star power resides on their opponents' roster.

That's not to say that Canada doesn't have its share of talented and notable prospects, because it has a bunch of them, but the focus in this tournament has largely been on Dahlin. With good reason, too. At only 17, Dahlin has not shied from the spotlight; he has seized it, with six assists in six games so far, while averaging nearly 24 minutes per game.

Now he'll get the biggest stage of his young career to showcase his abilities for the hockey world.

"I can't wait until the next game," Dahlin said after his team's 4-2 victory over the defending champion United States on Thursday night. "It's the final, so you have to come out and play hard. We're focused."

A pair of short-handed goals scored 38 seconds apart in the third period proved to be the difference for Sweden in its win over the U.S., with stars and depth players showing up in big moments during the course of the game.

A different kind of Canadian team

Canada, meanwhile, was barely tested in the playoff round. It took out Switzerland in the quarterfinals and a very talented Czech Republic squad in the semis by a combined score of 15-4. The Canadians' lone loss in the tournament came to Team USA -- in a shootout in the outdoor game at New Era Field -- in the preliminary round.

Although Canada's supposed lack of star power might not help sell tickets, this has been a team with contributions from everywhere in its lineup. The Canadians have scored 36 goals through six games in this tournament. All but two of the team's 20 skaters have at least two points through six games played.

St. Louis Blues prospect Jordan Kyrou leads the team with nine points, andOttawa Senators fourth-round selection Drake Batherson, who was not even under consideration for this team when the evaluation process started over the summer, is pacing the team, and tied for the tournament lead, with seven goals. Not every team in the tournament can say every player contributed to its success, but Canada absolutely can.

Even backup goalie Colton Point secured a shutout in his only appearance of the tournament.

How they match up

Roster depth has been especially important for both teams. In a lot of ways, the two squads are very similar. They're each getting contributions from throughout their lineups. Both teams have active defensemen who contribute offensively and move the puck extremely well, which helps maximize good team speed for both sides.

This will also be a matchup of the top two goaltenders in the tournament. Sweden netminder Filip Gustavsson, a Pittsburgh Penguins pick, has the best save percentage among goalies still playing in the tournament, with a .924 mark. Meanwhile, Canada's Carter Hart, a Philadelphia Flyers pick, has a .917 save percentage on 120 shots through five starts.

For the Swedes, Friday also represents an opportunity to quiet the notion that they can't get it done in the big games in this tournament. They've played for a medal in the past 11 world junior championships and have won an incredible 44 straight games in the preliminary round. However, they have only one gold -- won in 2012 -- four silvers and a bronze over that span, and only two golds ever in this tournament. It's hard to fathom, given the amount of talent the country has produced.

Canada will be going for its 17th gold at the world juniors, and its first since 2015.

Rasmus Dahlin, D, 2018 draft-eligible: With the spotlight on him, Dahlin has proved why he'll go first this summer in Dallas.

The game seems to come easy to him, with many strong qualities, including a maturity far beyond his 17 years. His puck skills and skating ability stand out immediately. Although he possesses high-end offensive skills, his defensive game continues to improve, as Dahlin is tough to get around. It's also very hard for opponents to get and keep the puck when Dahlin is out there. He has six assists so far in the tournament and was a huge factor in Sweden's semifinal win over the U.S. His poise will probably be his most important quality against a team as fast and physical as Canada.

Lias Andersson, C, New York Rangers: Throughout the tournament, Andersson has stepped up in key moments in games. He has a team-best six goals and scored a big one against the Americans in the semifinal. Andersson has been playing hurt the past few games, as he is dealing with a shoulder injury that left him as a game-time decision for Tuesday's quarterfinal win over Slovakia. Even while not at 100 percent, Andersson can affect the game thanks to his higher-end hockey sense. It's been a great tournament for him.

Elias Pettersson, RW, Vancouver Canucks: With seven points, including five goals, Pettersson is tied for the team scoring lead. He has a devastating release on his shot and has shown an ability in this tournament to create opportunities for himself with his higher-end puck skills. Before leaving for the world juniors, he was the top scorer in the Swedish league. Even though teams are keying on him, he still finds a way to produce.

Alexander Nylander, W/C, Buffalo Sabres: Named one of his team's best three players in the tournament by the coaching staff, Nylander has been a leader for Sweden. He has a goal and six assists through six games. Coach Tomas Monten praised Nylander's ability to play a more complete game for Sweden, noting that his professional experience and this being his third world juniors has really helped him take things to another level this year.

Cale Makar, D, Colorado Avalanche:Although he started the tournament primarily as the team's seventh defenseman, Makar has been given a lot of opportunities because of injuries on the blue line. He's been a key power-play weapon for Canada and, after a two-assist performance against the Czechs in the semis, leads all defensemen with eight points. Makar is a special talent with the puck on his stick, with great stickhandling ability and a knack for getting his shots through.

Drake Batherson, C/W, Ottawa Senators: Perhaps one of the most unlikely star performers on this Canadian team, Batherson is tied for the tournament lead with seven goals. He's on the team's second power-play unit and has often been the net-front guy. According to Ducharme, Batherson wasn't really on the team's radar until it made note of his hot start with Cape Breton in the QMJHL this season. The team invited him to play in the Canada-Russia series, and his spot was sealed. No one could have seen him being this team's leading scorer going into the tournament, but here we are.

Sam Steel, C, Anaheim Ducks: Steel centers Canada's top line and makes a lot happen. He has good speed but sees the ice remarkably well. Playing alongside Kyrou (St. Louis Blues) and Dillon Dube (Calgary Flames) helps, but we're seeing the tools that have made Steel a top scorer in the WHL. He is tied for second on the team with eight points.

Jordan Kyrou, RW, St. Louis Blues: With nine points, Kyrou is Canada's leading scorer. He also seems to be leading Canada in highlights. With quick puck skills and a slipperiness that makes him tough to defend, Kyrou can create a lot of space for himself to make an impact and makes Canada's top line more deadly. You could tell even from Canada's summer camp that Kyrou would be an impact player for this team. If Canada is going to come away with gold, it needs all its lines clicking, but if that top line with Steel, Kyrou and Dube is rolling, it's going to make for a long night for Sweden.
Report a correction or typo
Related topics:
sportsespnhockeyworld juniorsst louis bluesnew york rangersdrake bathersonbuffalo sabresteam usagold medaljordan kyrouworld junior championshiprasmus dahlinwjccale makarnhlcanadaswedenelias petterssonlias anderssonalex nylander
Copyright © 2021 ESPN Internet Ventures. All rights reserved.
TOP STORIES
COVID Updates: Full FDA approval for Pfizer vax could come in weeks
NYC to require proof of vaccine for indoor events, activities
Cuomo investigation: What we know and what's next
NY DAs request materials in possible Cuomo criminal probe
Marist poll: Majority thinks Cuomo should resign, protests ongoing
NOAA updates Atlantic hurricane season forecast
'He's a danger': Cuomo accuser Bennett speaks out on 'GMA'
Show More
2 dead in horrific crash between car and tractor trailer
450,000 bees found inside walls of home
New details revealed in crash that killed 4 family members
AccuWeather: More clouds than sun, still comfortable
Obama scales back 60th birthday celebration due to COVID concerns
More TOP STORIES News